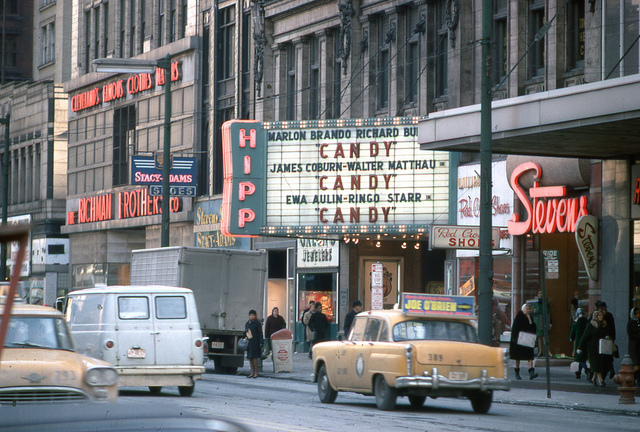 John Phillip Sousa and Marie Dressler are two of the many name performers who played at the Hippodrome Theatre.

From 1912 to 1922 it was operated by the B.F. Keith chain and presented movies & vaudeville. This place was HUGE. The main entrance on Euclid Avenue had a marquee and box office and came into a lobby that went through the block to another entrance on Prospect Avenue where there was another marquee and box office. The auditorium was off the lobby to the left, perpendicular to the lobby. It was remodeled by architect Thomas Lamb in 1930.

The times I was there was as a kid in the late-1960s it was a grind house, film running continuously. I never saw the interior with the lights on, so I can’t really say what the architectural style was. It was high and dark. I could barely make out that there were three balconies above the orchestra, but they were always closed in those last years.

The Hippodrome Theatre lasted until 1981 when it was demolished to make way for, what else, a parking garage.

I visited it right before demolition and it was a huge and complex place. The upper balcony looked across to a flat wall way above the proscenium. There was a stairway for the top balcony balcony that had a railing down the middle for crowd safety and winded up many flights of steps with no other doors until you actually got to the balcony. The rehearsal hall had been used by a radio station and was huge as well with South facing windows, so there was natural light, the West wall of that room was the wall the upper balcony faced since it was over the auditorium. I need to look at my pictures again which shows it was similar gargantuan size like the Philadelphia Met and the Auditorium chicago.

WF, can you post the pictures or e-mail scans?

“I’d Rather Be Rich” 1964 Biggest Wednesday Opening in the History of the Theatre.BOXOFFICE Sept.7 1964.

I grew up in Cleveland and was a regular at the Hippodrome. It was literally like a palace. Plush red carpet, a grand sprawling marble stairway and there were gargoyle heads that lined the walls. The screen was huge and framed by heavy, thick velvet drapes that parted at the beginning of every movie to entertain you with coming attractions and instead of commercials you had a The Three Stooges short or a classic cartoon like Road Runner or Wood Woodpecker. I saw Bruce Lee’s Enter the Dragon 16 times their. Cleveland has a great deal to hang their heads in shame for tearing down this grand city treasure. No effort was made to save the Hippodrome. No words can express the anger and sadness I felt when Cleveland allowed the destruction of this irreplaceable treasure.

There are two pictures of the inside of the Hipp(Inside lobby and auditorium) in the book “Euclid Avenue, Cleveland’s Sophisticated Lady, 1920-1970” by Karberg and Toman, published by Cleveland Landmarks Press. Pictures of other downtown theaters are also in the book. Maybe someone can get permission to have these pictures scanned for inclusion in Cinema Treasures.

I was actually working downtown in the early 80’s at Ameritrust on the corner of East 9th & Euclid and watched the Hippodrome be imploded. So it wasn’t destroyed in 1975, it was 1981. I never got to go inside and I was quite young when it was demolished, but I do remember it being a very sad day and very sad thing to watch “history” being destroyed.

I vividly remember watching “Goldfinger” on New Years Day the year of its release…I was a pre-teen, and I believe Mom picked me up after the show…But, sitting there when he gets his introduction to Honor Blackman, and utters her name, POOOSIE,and a wave, a tsunami, of unbridled and hysterical laughter swept over the entire audience……Later by a few years, a few of us ‘creatively cut school’(Cathedral Latin on 107th and Euclid)and ‘visited’ the pool hall located beneath the movie theater proper….Boy, was that adventurous !

Very sad that Cleveland lost this one, now right beside the reactivated 4th St. restaurants and bars. The Hippodrome would have been a great refurbished music/film/event venue like the United Artists Ace and Orpheum in downtown Los Angeles. I saw the first run of GOLDFINGER here with a packed house and when i was younger, BECAUSE THEY’RE YOUNg with Dick Clark and Tuesday Weld. I was too young but recall big premieres of IMITATION OF LIFE here with Lana Turner making an appearance since producer Ross Hunter was from Cleveland and later a PORTRAIT IN BLACK premiere. Glamour days on Euclid.

I was in senior in high school going to the Cleveland area to check out John Carroll University. I lived in Philadelphia. We (my mom was with me) checked into the Sheraton Terminal Tower the night before my appointment. After dinner, looking for something to do, we decided to see Hitchcock’s The Birds which had just opened (Mar/Apr 1963). Like another poster mentioned, I never saw the interior with the lights on, but you got the impression that it was big…really big. The projection and sound was first rate. Whenever, I saw The Birds later in life, I always thought of that trip to Cleveland. The only other thing I remember that was kind of odd, before the feature they ran a short which was like a music video of Acker Bilk (the English clarinetist) playing his big hit Stranger on the Shore.

Additional history in below link, indicates B.F. Keith took over management from 1912-1922, when film then was introduced to it. So Keith’s Hippodrome should be added to previous names. Postcard advertising such added as well.