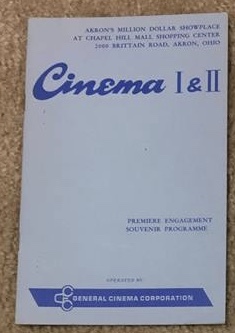 This was the first “built-as” two-screen theatre in Ohio, opening on October 19, 1965. The layout was duplicated with the Parmatown Cinema in Cleveland, but Chapel Hill had a deeper lobby and shorter auditoriums. On November 2, 1973 one auditorium was divided. On June 3, 1983 it became the Chapel Hill Mall V . It closed on September 24, 1988 when GCC opened six screens at the Plaza at Chapel Hill.

I believe that the space is now occupied by an Old Navy store, which is rather common practice…large space, few support columns. Makes for a good specialty retail. Although these old shopping mall/center cinemas are not ususally viable as first-run houses anymore, developers and real estate lessors are still aware of their architectural potential as open spaces that were/are not cheap to construct.

Fun fact about this mall…it has its own heating and chilled water plant, so none of the units, the old cinema included, has its own HVAC equipment. Mall owners quickly realized that this was too expensive and delayed the opening of a shopping center, but smaller, privately-owned shopping malls like Chapel Hill provided everything before packaged, drop-in HVAC took off in the 70s.

By the time the Parmatown Cinema in Cleveland was built in 1967 the package HVAC units were in common use, and it had 8 big Carrier units up top. There were 2 units for the lobby and 3 for each auditorium. It was based on the same layout and design as the Chapel Hill Cinema, and had 2 large rooms upstairs over the rest rooms where the water chillers, boilers and air handlers were to be located. Although I had been in the Chapel Hill Cinema I didn’t work there and couldn’t go snooping around so I don’t know if the hvac equipment was in there, on the roof, or from a central plant. At Parmatown, the last-minute change to the package units left us with plenty of storage space, always in short supply in a theatre.

Yeah,at our GCC we had to store cups in booth and the union operators were not happy about it.When I got to Georgia Square Mall 4 cinemas in Athens {on CT} we had more than enough room than we did at Regency Mall{on CT] all GCC.

October 19th, 1965 grand opening ad in photo section. It has a picture of the theatre.