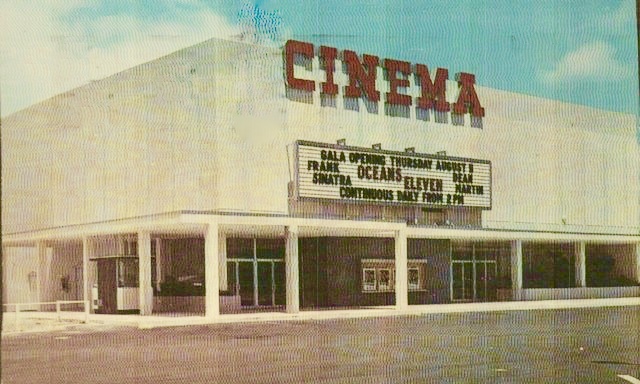 General Cinema Corporation made its South Florida debut with the 1200-seat Pompano Cinema, North Broward County’s first indoor theater. Designed to blend in with the new suburban surroundings (GCC’s main demographic of the time), it was originally part of the Shoppers Haven center.

While designed for economy and efficiency rather than architectural splendor, the Pompano Cinema was advertised as having the largest screen in Florida. I recall the auditorium was originally lined with undecorated walls, and corrugated metal panels along the side exits (the panels were ventilated — an air conditioning recycling consideration, perhaps?)

Programming was mainly family-oriented at first, and the Pompano always scored whatever Disney product was to be had (including the original “That Darn Cat,” my earliest memory of moviegoing). Once the ABC Florida State Ultravision opened three miles north, the Pompano started running more PG and R releases. They’d rarely venture outside of mainstream fare, but had the occasional surprise such as the Broward exclusive of Spike Lee’s first film.

It would remain a movie destination (through twinning, quadrupling, and a change in ownership) for 38 years, followed by a stint as the Club Cinema nightclub.

Probably its most noteworthy moment occurred at a reunion concert of late 1970s/early 1980s South Florida bands in January 2007, honoring the late Sheila Witkin (band promoter and nurturing presence). Johnny Depp attended to play alongside his old band The Kidz.

As of 2009, the site and its surrounding strip-shop rows are slated for redevelopment. A sign on the property mentions availability of “25,000 square feet big box retail.” It’s possible the Pompano Cinema will mark its 50th anniversary as a store.

P.S.: Thanks to whomever’s keeping the lights on at this remnant of the former offical GCC site, for some background details:

As awkward as it sounds, the later name under Lockwood McKinnon/Friedman was “Cinemas 4 Pompano” (with “s”).

Now 50 years after its grand opening with “Ocean’s 11,” the former Pompano Cinema is now a tavern. Plans for redevelopment are apparently on hold.

This house opened as the Shoppers' Haven Cinema. A small photo of the screen end of the auditorium appeared in the October, 1963, issue of International Projectionist. The house featured a maskless Schlanger screen, which suggests that theater designer Benjamin Schlanger was probably the consulting architect for the house. He played that role for Genreal Cinema’s Cinema Shoppers' World in Framingham, Massachusetts, an a number of other General Cinema projects of the period.

After lengthy delays, the former Pompano Cinema is among several buildings (also the former tire shop and retail spaces to the south) now under demolition. A WalMart Neighborhood Market is planned for the site.