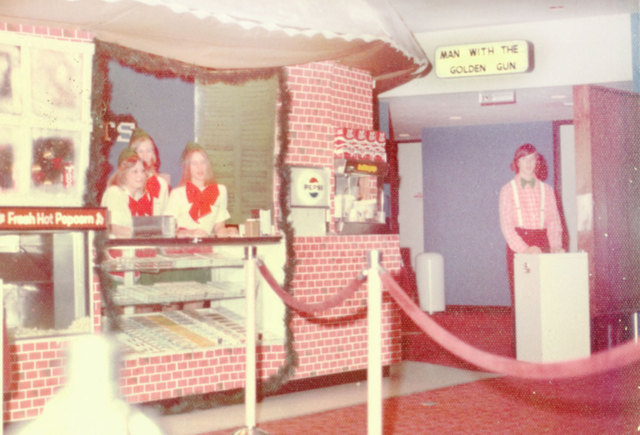 National General Cinemas opened the Quail Creek Cinema as a twin screen cinema on March 31, 1972. It was taken over by Joy Theatres in June 1991 and on November 22, 1991 it became a quad. The Quail Creek Cinema was closed in the late-1990’s, and has since been demolished.

When I was growing up in the 70s, the Quail Creek was a two-screem theater that did a brisk business – it was THE place to go to see a movie. It was built in a modern building and located near a large shopping center. Being close to downtown Shreveport and Barksdale Air Force base it was always packed, particularly during animated features on Saturday afternoon. Sometime in the early 80s it added two more screens in order to compete with several emerging mall-cinemas in the area. When I moved to Florida in 1995 the Quail Creek was still open, yet struggling to compete.

When I moved to Shreveport in the 1990’s Quail Creek was open as an art thearter. It was the only one which would show internation, independent, classic, or cult films. In the late 90’s it closed after Tinseltown Megaplex opened. The mall thearters have also closed. Lots of thearters are closed. There are now only three. The Tinseltown in Shreveport and two Cinemarks in Bossier. I’d say there were 4-5 other thearters that closed due to the competition.
As for Quail Creek, it later reopend as an oddball funeral home where where you could view home movies of the deceased and also pay your respects. That lasted about a year. It’s borded up now. The only place to catch a good movie now is at the video store.

Quail Creek was demolished in late 2007.

Up until 2009, the marquee still read QUAIL CREEK CINEMA. At some point during 2009, the word cinema was either removed or covered up.
Today, you can still see the faded red letters QUAIL CREEK which represent the top of the marquee. I am not referring to a traditional marquee above the theater entrance (the actual theater has been demolished), but the one that stood at the end of the sidewalk so cars driving by could read what was screening.

Hi My name is Philip Rebstock I was Quail Creek Cinema Manager for General Cinema Corporation from 1973 to the end of 1976. I was only 24 years old when I took over this theater. I was the youngest in the GCC Houston Division. Some of my fondest memories are of this theater . The little id pic I chose is in the lobby of quail creek 1973 or 1974. I uploaded a lobby pic with my employees behind the concession stand when “The Man With the Golden Gun Was Playing” I had the best employees of all , with this group of kids.

This opened on March 31st, 1972 as a twin by General Cinemas. It reopened in June 1991 by Joy’s Theatres and split into four screens on November 22nd, 1991. Grand opening ads in the photo section.

Rebstock, if you are still monitoring this, please contact me about the Quail Creek Cinema.