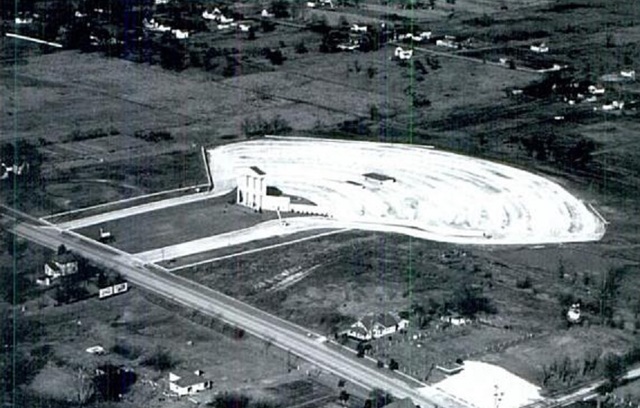 The Dixie Drive-In was opened around Easter of 1949. Located just north of Liberty Lane on Illinois Route 1 (North Vermilion Street also known as the Dixie Highway). The original 63 feet by 58 feet wide tower was patterned after the front of a typical Southern mansion. The back of the tower had the screen. Was built for 700 cars.

The original builders were Roy O'Keefe amd James Wendling. Original cost of construction was $125,000. The original tower was destroyed in a thunder/wind storm June 10, 1963 and was replaced with a non-descript screen. Later expanded to a three screen, showed last films in 1983 and was torn down in May 1985. A car wash and apartment building were built on the site of the drive-in.

For most of its life the Dixie was one of 3 Danville area drive ins owned by Butler Enterprises (Jack Butler). The tri-screening project in the early ‘70s was a joint venture of Butler, Phil Gibson and Daniel Welsch. The original main (front) screen equipment consisted of two IPC Super Simplex projection heads w/Bausch & Lomb optics and fast intermittents, RCA optical sound heads and 6-KW xenon lamps from Optical Radiation Corp. Film handling was performed near-flawlessly by POTS air-system platters. The automation controller was homebrew but logged many hours of trouble-free up time.

When the 2 back screens were added a separate projection booth was built behind the concession stand. IPC heads again with ORC lamphouses but with what appeared to be a crude homemade wooden frame film delivery system using 28" reels. All very much out of character compared to the fairly deluxe operations on the front (primary) screen. The 2 back screens themselves were something to behold, with aluminum trailer siding nailed onto 2x4s supported on kreosote poles. Annual spring breezes frequently took their toll on the 2 back screens, as did occasional summer storms.