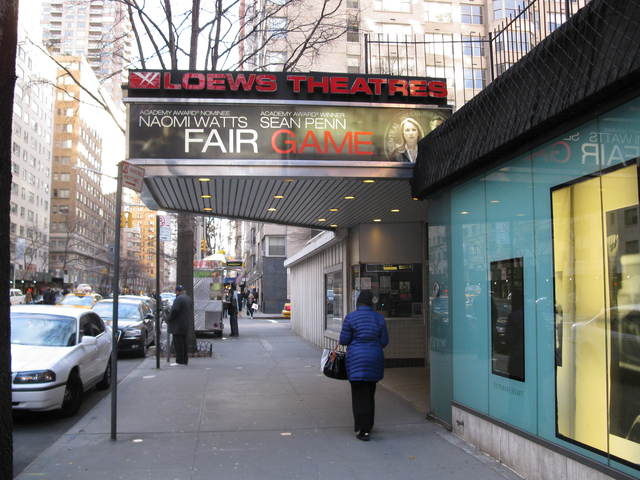 This was the replacement for the grand Loew’s 72nd Street Theatre that previously occupied the entire 3rd Avenue blockfront between E. 71st Street and E. 72nd Street. This cinema opened on October 9, 1962 with Katharine Hepburn in “Long Day’s Journey Into Night”, and lasted longer than it’s predecessor which lasted only 29 years. It was part of a 42 story condominium apartment building that was designed by Emery Roth & Sons, Architects.

The cinema occupied the E. 71st Street corner of the one-story commercial wing of the building. The entrance was on 3rd Avenue. When you entered from the street you are on the balcony level. It had a split balcony, with seating only above the aisle and the wall on each side. What would be the center section of seats was the projection room. From the street level lobby you descended a stairway to the main auditorium area. Upper and lower lobbies were microscopic, considering the capacity of the auditorium.

It was built in the days when New Yorkers expected to have to stand outside in line. With the closing of the Astor Plaza this was Loew’s last single screen theatre in Manhattan, it was also the oldest of the Manhattan theatres that were built by Loew’s.

I was told that seats from the Astor Theatre were used to re-seat this theatre, which at one time was in desperate need of comfortable seats. The Tower East played a mixture of art-house product along with general release films. You can’t play just anything there and expect to make money. The upper-east-side neighborhood loved the place when it played an upscale type of film.

The auditorium was pleasantly decorated with red curtains on the screen that really did open and close, though they were left open because of the slides on the screen during intermissions. (The Astor Theatre closed their curtain at the end of the show only because the throw was too far for the ordinary slide machines used). The side walls were covered with red and gray draperies and the ceiling was painted black. It had 70mm capability - but 70mm prints were few and far between.

Having absorbed Loews theatres, AMC tookover. On December 9, 2010, the Loews 72nd Street East closed with the political thriller “Fair Game”. Still known to moviegoers by its original name, the ‘Tower East’ enjoyed a long 48 year run as a prestigious Upper East Side single screen moveiehouse. It was converted into an Anthropologie store which opened on February 15, 2012.

I saw two Streisand films here in sneak previews, “The Way We Were” and “Funny Lady”. A very restless and disrespectful crowd sat through “The Stepford Wives” waiting for “Funny Lady,” and a lot of very funny comebacks were hurled at the screen.

So, what’s the scoop? Did they ever open that Anthropological store in here? Is there anyone with a camera nearby to possibly snap a few pics of it with the new tenant and inevitable changes to the exterior and post them on this site? If so, thanks in advance.

The dismal 1996 remake of the French film “Diabolique” is, sadly, the only movie I saw at this fine theater. I repeat myself frequently when it comes to most of the NYC cinemas I’ve visited past and present.

On this date 50 years ago rosemarys baby was shown here…

The theatre looks similar to the UA Brandon Twin (Continental) with the small balcony sides.