This opened on January 26th, 1966 after an open house on the 20th. Two grand opening ads posted.

Correction: opened on January 19th, 1966 as per this article: 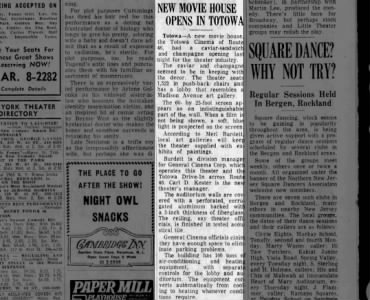 CC I never worked there but i remember going to the arcade in the lobby….it was awesome!!!

I worked as an usher there for about 6 months in 1984. Just wondering if anyone else out there who also worked there happened to be reading this… Chris

I saw Johnny Winter play at Totowa Cinema in the early ‘70’s. Does anyone know the date? It was a great show.

I saw a lot of movies at Totowa Cinema 46. The one I really remember was “The Fly”. It was rated R. They actually checked our i.d.’s. My two buddies were only seventeen. But I was eighteen so they were allowed to see the movie because I was with them. I thought that was really stupid.

I accidentally posted a comment about office max on a different theater in totowa, but office max is closed earlier this year waiting for another retailer to come in. This year marks 20 years since this theater was burned in a fire. I always loved the arcade room since it was decent sized.

Thanks for posting that ad, Ken. I saw “The Towering Inferno” at the Totowa Cinema 1, and I remember wishing it had been at the Cinema 46 down the road because they had a bigger screen.

The fire occured during the removal of the theatre equipment. The crews were using torches and the walls put up during conversion to a twin caught fire.

Does anyone have any exterior/interior photos of the Totowa Cinema?? I miss that place

Seems this theatre was also known as Totowa Twin as seen in a 1982 ad.
View link

1971 ad when this theater was a part of GC. Not sure if this was an adult theater at the time or if the movie was a “mainstream” X rated release (courtesy of RobertR):

I’d like to make a clarification to an earlier posting of mine.

A couple of posts up I commented on the installation of Dolby Stereo. However, the theater that information applied to is actually a different theater in Totowa, the Cinema 46, which is what I was led to believe was this theater based upon details included in the first two posts in this thread at the top of the page.

I guess I missed Pete Apruzzese’s post about midway through that corrected the claim that this was the Cinema 46. Sorry for any confusion. How many others have been confused by this?

The Totowa Cinema, a two-screen theater about a half-mile west of Cinema 46, shut its doors in 1993 to make way for an office supply store.
The Record (Bergen County, NJ), April 30, 1997 pB1

QUOTE:
“In the early 80’s they installed Dolby Stereo capabilities in Cinema One for the opening Empire Strikes Back” (rhett)

“the Totowa Cinema had Dolby Stereo as early as the 1977 release of Star Wars, I also saw the remake of Invasion of the Body Snatchers there and it was presented in ear-splittingly-loud stereo.” (PeterApruzzese)

According to Dolby Labs' records, a Dolby sound system was installed at this theater in December 1978. It was a CP100, which allowed for both 35mm optical stereo and six-track magnetic 70mm playback.

I saw “INvasion of the Body Snatchers” on opening night in 78 at the Totowa Cinema 1. It was excellent. They had Dolby in only one theater. It was an excellent theater. They always had matinees and for years had continuous shows every day. There were only minutes between showtimes, not like today when there’s about an hour between shows at multiplexes. Does anyone remember the big screen when it was a single theater…it was sheetrock i believe. I loved going up to it and knocking on it. It was awesome.

Does anone have any photos of the Totowa Cinema, either interior or exterior??

Pete: I remember Pauline Kael saying in her review of the 1978 Invasion of the Body Snatchers that it had the best Dolby Stereo sound she’d ever heard. What a disappointment when I saw it at the Gemini Twin in Manhattan, and it sounded scratchy, distorted and turned down way too low. I’m glad you got to hear it right.

To update the first post a bit, this theatre was simply called the Totowa Cinema, the “Cinema 46” (I worked there in 1982) was just down the hill where the CompUSA is now.

Also, the Totowa Cinema had Dolby Stereo as early as the 1977 release of Star Wars, I also saw the remake of Invasion of the Body Snatchers there and it was presented in ear-splittingly-loud stereo.

It WAS the Totowa Drive-IN, right across the road from the Totowa Cinema. It was right behind the Lantern Restaurant (which is now a used car lot) I remeber having a burger and siting by the back window and watching the movies on the drive in screen as a kid.

What was the drive-in that I visited in Totowa back in the late 50s-early 60? I don’t see mention of the Totowa D-I; did it have a different name? Jerry

A GREAT theater.( was meaning to enter this theater on this site myself) When it was a single screen, the screen itself was indented (kind of 3 dimensional) and made of sheetrock. It was large and outstanding. They showed The Godfather there. I myself saw, films such as “On Her Majesty’s Secret Service”, “Scarecrow” , “Enter the Dragon”, “Westworld” etc. The last film I saw there as a single screen was “Chinatown”. They twinned it, and it re-opened in Nov. 74 with..Cinema One-Mixed Comany plus Westworld…Cinema II…The Seduction of Mimi…I remember the first film I saw there as a twin was “Death Wish”. When I walked in I was so disapointed. It was once a huge screen now smaller. They built a wall down the middle.

It stayed that way until Fall 1992 when they finally closed it. The fire then happened (suspiciously) then it was gutted (I remember the bulldozers) and now is the Office Max. I get nostalgic every time I go in there. I always remember the long lobby, and the entrance into the auditorium.

In the early 80’s they installed Dolby Stereo capabilities in Cinema One for the opening Empire Strikes Back then Raiders of the Lost Ark. Cinema II was always to be mono. The last films I saw before it closed were…Cinema One..Alien 3…Cinema II..Sneakers.

I loved riding by the huge outdoor marquee to see the signage and what was playing.
A truly great showplace undone by time and multiplexes. Totowa had 2 large theaters, Totowa Cinema and Cinema 46, a few minutes away. Both gone.

If anyone has access to photos from these theaters , it would be great. I hope there’s as good a forum on this theater as that of the Astor Plaza in NY.