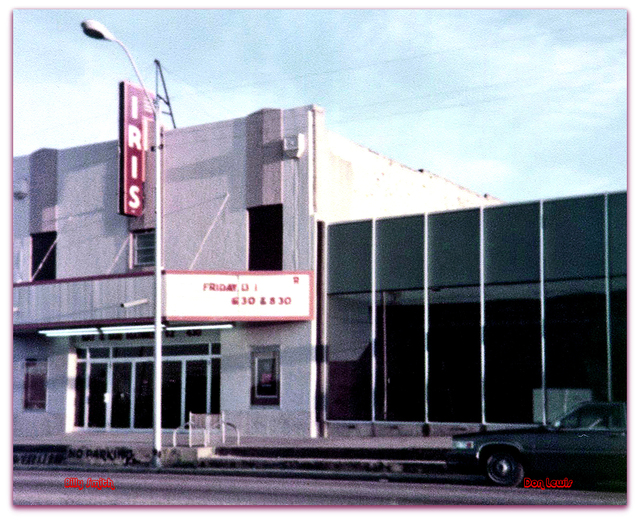 The neat vertical sign spelling out IRIS has been rewired and lights up again in 2015. A bookshop operates in the front of the building. In the auditorium movies are presented and also stage plays.

hello…I purchased a building that once was the IRIS movie theatre many years ago..I have converted it into a banquet hall. but I want to put back some of the old movie theatre look. There are no pictures of the interior of my IRIS. So if anyone has any old pictures of their IRIS theatre please send me a copy. What I want to do is perhaps take some of each of the pictures of the IRIS and reconstruct the look of the old time theatre. I even want to put back a front markee of the IRIS…Thanks for any help…Joe Hig

Here is a good photo of the Iris.
View link

To expand briefly on the comments made back in 2004 by Bryan Krefft and Jim Rankin in response to the question by DavidH about the early popularity of the name Iris for movie theatres; The name was an apt appellation for movie theatres because the movie camera itself has an iris, so called after the iris of the eye. The camera iris was an intricate technological wonder of the age, and probably impressed people of the time as much as our various electronic gadgets impress us now.

Both the iris of the eye and the iris flower had, because of their varied colors (and, in the case of the eye, because it conveyed information, i.e. messages), received the name of the ancient Greek Goddess Iris who, as Bryan pointed out, was the Goddess of the colorful rainbow, as well as a messenger of Olympus.

The current occupant has a photo of the theater on its site:
http://tinyurl.com/ytlgy7

A 1980s photo of the Iris Theater when it was still open as a movie theater. It still had a marquee and “Friday the 13th” was showing.

This theater was featured in a 1953 theater owners' documentary about the financial devastation wrought by the 20% federal tax, plus other encroachments on the box office, such as television.

If you are seeking interior photographs of the Iris Theatre, you might visit your local library, city hall or put out a request for help from possibly a seniors club, etc.

Good luck and “GO FOR IT”

P.S., You have a very famous black movie star hailing from your city (sorry, his name escapes me) but if you are non-profit, why not ask for his backing, especially for publicity and re-opening!

My husband and I currently own this wonderful old building. We do have Books and Crannies in the front part which is a used bookstore. In the back, we have a small black box theatre with a movie screen where we show classic movies two nights a month. Admission is free – it is a fun night. The Vagabond Players are a local theatrical troupe who produce and perform live theatre on our stage 3-4 times per year. We have had the marquee sign rewired and it again lights up the night. And a recent addition is murals of old movie posters on the back of the building. We love this old building and are happy to be her caretakers. As for her name – when the building was about to be opened in 1925, the owners ran a contest to choose her name. A local lady suggested “The Iris” because she loved the Irises that bloomed in her yard. If you are in Terrell, please feel free to stop in!

This web page about the murals in Terrell includes a paragraph about the movie poster mural on the back wall of the former Iris Theatre building, and includes this information about the theater’s history:

“The Iris Theatre, built by Leaman Marshall, opened in 1925 and was touted in the newspaper as ‘Terrell’s Finest Theatre’. (In the 1920’s there were three theatres operating in downtown Terrell – The Iris, The Palace, and the Lyric.) The posters include ‘The Lady’, a silent film which was the first movie shown at The Iris. The Iris operated continuously as a movie theatre from 1925 to 2001 when the modern multi-screen theatres in Mesquite drew the crowds away from the historic single screen theatre.”