State Theatre Center for the Arts

The State Theatre Center for the Arts (Official) 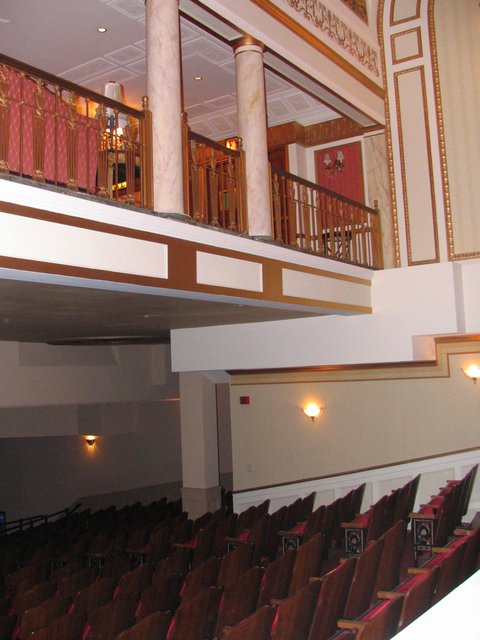 The State Theatre was hailed as “the largest, finest and most beautiful playhouse in Western Pennsylvania” upon its opening in the fall of 1922. With many accolades it became a “picture place”, showing silent movies and presenting vaudeville’s finest acts from the B.F. Keith Circuit.

Thomas Lamb, a nationally known theater architect, designed the State. He is best known for his work in the 18th century Robert Adam’s style of architecture and for his fine acoustical planning. The Ingstrip-Burke Company of Chicago, Art Designers, decorated the interior of the Moderne structure in the Adam’s style. The theme was that of “refinement of line and chasteness of ornamentation”. The artist in charge, Michael Tomlin, educated at the School of Fine Arts in St. Petersburg, Russia, pronounced himself well-satisfied: “It is better than I hoped, it is what I dreamed”.

Welcome to the State Theatre. If you have any questions feel free to visit our site at www.statetheatre.info If you’d like a tour of the theatre please feel free to give us a call at 724 439 1360.

This theatre was part of the old Manos Theatre Circuit.
I can remember a sellout for a movie at the State as late as 1970 or ‘71. The movie was a four wall Sun International rental deal called “Brother Of The Wind”
It should also be noted that the last movie shown was in 1972 “The Effects Of Gamma Rays On Man In The Moon Marigolds” starring Joanne Woodward and directed by Paul Newman.
The theatre closed a few days before Manos opened their new Twin 40 Cinemas in The then new Uniontown Mall.
Twin 40 later became Quad 40 and in it’s latest incarnation, it’s
the all too generic Carmike 6.

Comments from an employee of the State Theatre, I worked there fom 1970-72, 1978-86, and 1990 thru 1997 in various capacities:
Early in 1978, Uniontown businessman Clyde Tewell bought the State and remodeled it (brought it up to “Code”, actually). Mr. Tewell’s love of “Country Music” prompted the purchase,with the intention of putting live “Country” acts onstage. Re-opening as the “State Music Hall” in July, 1978, the State featured all of the “name” acts in Country Music, ranging from superstars like Alabama, The Oak Ridge Boys,& The Statler Brothers. Also appearing were “Hee-Haw” icons Roy Clark & Buck Owens. Other great shows featured David Allen Coe, Anne Murray, Johnny Cash, Charlie Pride, Ronnie Milsap and The Gatlin Brothers. Later on, during the “Disco” era, the State had Chic and Peaches & Herb. Other headliners were The Lettermen, Frankie Valli and Blood, Sweat & Tears, plus several others that I simply don’t remember. It is generally said that the State featured “every” country superstar other than Willie Nelson, Dolly Parton & Kenny Rodgers, who were the most expensive performers of that era…The high costs of purchasing the acts forced Mr. Tewell to curtail his bookings in 1982. A local “community theatre” group held several performances in the mid-eighties, featuring “Brodway Musicals”, such as “Annie”, “Man of LaMancha, "Fiddler on the Roof”, etc. Interestingly, all of the roles were filled by local (amatuer) performers. This series ended after an 18 month run. The State fell dormant for several more years, only open to host rental shows and local high school graduations. In 1990, the Greater Uniontown Heritage Consortium purchased the State from Mr. Tewell & renamed it the “State Theatre Center for the Arts”. An extensive renovation to the stage rigging and lighting was performed at that time, doubling its capacity to accomodate the shows that the Consortium was interested in presenting. Opening in 1990 with “Dracula”, the new State was vibrant again with excellent productions that attracted a variety of patrons. Children’s programmmes were also added, something missing from the State since the Saturday “kid shows” of its movie-house heyday. The State, under the wise direction of new Executive Director Marty Shiff, continues the tradition of serving the tri-state theatrical community with wonderful productions. An on-going restoration programme is well underway, with excellent results. I am wishing the State & Mr. Schiff the best of luck all future endeavours.
Ed Wolinski
Uniontown, Pa

Thanks Ed!…for the history and the well wishes. Do you have any photos from the days you were here? I’m trying to gather as much historical materials as I can.

Take care and thanks again!

Here is an August 1965 ad from the Uniontown Morning Herald:
http://tinyurl.com/3dt6c2

Here is a May 1926 ad from the Uniontown Morning Herald:
http://tinyurl.com/n29mz8

This is from the Uniontown Evening Standard in February 1978:

The sale of the 56-year-old State Theater is now as concrete as the building in question with yesterday’s processing of the official deed of transfer. Located on East Main Street in the downtown section of Uniontown, the State Theater building was purchased last month by local auto dealer Clyde Tewell from Manos Enterprises, Inc.

The price tag on the old movie theater, which opened Oct. 30, 1922 and closed its doors June 19, 1973 was in the $75,000 neighborhood. Franklin A. John Real Estate Agency of Uniontown handled the transaction between the buying and selling parties. Stale Dept. of Labor and Industry granted its approval late last year, providing certain adjustments would be made prior to the theater’s actual opening and operations. A few of the renovations included the addition of steel doors in the corridors, outside frontal repairs and a new inside curtain along with lighting fixtures and closing off some interior portions of the building. Tewell said he would meet with Dept. of Labor and Industry officials Friday to determine exactly what has to be done to the theater.

He estimated that the necessary repairs would range anywhere from $50,000 to $75,000, bringing the entire cost to roughly $150,000. Tewell said his plans for the theater, speculating opening anywhere within three to four months, would be to import and promote the top Country and Western acts from Nashville. His plan is already into effect, as Bill Anderson, one of the top acts from Nashville has been booked to appear at the theater in July. Having shown his hand, Tewell said, “I have to get ready. The money has already been committed and I really don’t have any choice now.” He added that he had “three or four” other acts almost in the booked hopper so to speak, but declined to comment as to their respective identities. Tewell said that ticket prices for scheduled live performances would range anywhere from $5 to $10.

With renovations and repairs completed, Tewell said the seating capacity would in all likelihood be reduced from the current 1,800 to 1,500 seats, probably restricting the appearance of some performers due to financial considerations. Hypothetically speaking, an example of this would be with a popular performer such as Dolly Parton. Although a guaranteed draw, the initial investment could not possible justify the actual gate receipts.

However, not expecting to compete with the Grand Old Opry in Nashville, Tewell did say he hoped to promote something similar to the shows held in Wheeling, W. Va. Country and Western music buffs certainly hope this experiment doesn’t go the way of the dinosaur by failing to clear financial hurdles â€" the same hurdles which necessitated the closing of the State Theater five years ago
because of today’s dwindling film-going audiences.

Here is a November 1930 ad from the Morning Herald:
http://tinyurl.com/yer6eja