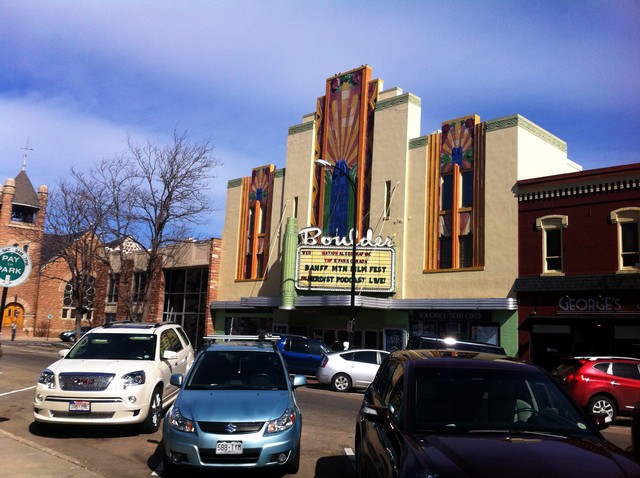 Built in 1906 as the Curran Opera House, the theatre was initially a place for live music and stage shows as well as silent film from 1915. By 1929 it had been renamed Isis Theatre.

Following the boom in motion picture exhibition, the theatre was remodelled in 1936 and reopened as the Boulder Theater and included the more attractive and then relevant Art Deco aesthetic. By the time of its rebirth in 1936, the Boulder Theatre had became a venue for the movies only—a format it maintained until 1978 when movie going alone could no longer pay all of the Boulder’s bills.

In 1981, the theatre was converted into a concert hall, but once again, The Boulder Theatre could not remain viable. In 1988, it underwent yet another renovation to incorporate a more concert-friendly seating and acoustic makeover.

Today, the Boulder Theatre has remained a prime venue for concerts and true to its Art Deco past despite numerous renovations. The theatre also shows occasional movies.

My wife and I thank Sarah Coffield, Publicity and Promotions for the Boulder Theatre, for her hospitality in letting us see the inside of the theatre when we spent a day in Boulder two weeks ago. It is a truly beautiful theatre, with an auditorium decorative scheme that is largely intact, with original murals and patterns thoughout.

Here is another photo:
http://tinyurl.com/ycbqxar

Are there any AUDITORIUM shots available… please?

Historical views of the the theater’s interior can be seen on its history page, both in its first incarnation as an opera house and then later as a movie theater. Click on the “Official” link in the headnote, then on “Venue Info,” and then on “History.”

A photo of the concessions counter, at least a few years ago: View link

There is a contemporary view here: View link

Seated 712 according to the Film Daily Yearbook of 1942

The last 35mm film to play at The Boulder was “The Rocky Horror Picture Show” on Friday, October 17th, 2014. Doors opened at 7:30pm, live preshow entertainment/activities typical of RHPS screenings occurred between 8:00 and 8:45pm and film hit the screen at 8:45pm. Projectionists were Mr. John Templeton (a union projectionist/stage hand/audio engineer since December 11th, 1973 and projectionist at The Boulder since March of 1973) and myself, Mr. Anthony L. Vazquez-Hernandez (projectionist for over 15 years and union projectionist since 2007, projectionist at The Boulder since March of 2007). Theater was sold out. I literally just tore out the booth with Mr. Templeton less than an hour ago (Monday, October 20th, 2014 9:45am-12:30pm). The booth will be used in the foreseeable future for spotlights and a DCP system will also be brought in occasionally for film festivals and special screenings. All other cinema screenings will be presented on a non-permanent, small digital projector and Bluray/DVD player mounted downstairs at the sound rack.

I’ve seen so many great concerts – and a couple movies – at this superior venue. New pics from a couple years ago in the Photo section.

The Curran Opera House was listed in the 1914-1915 American Motion Picture Directory. The August 29 issue of moving Picture World that year ran this item: “Thursdays will be Mary Pickford days at the Curran theater in Boulder, Colo.”