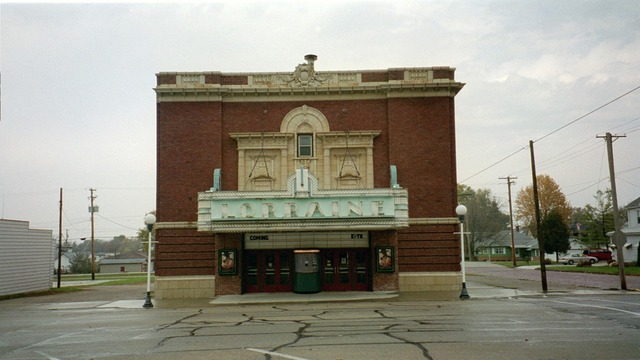 The Lorraine Theatre, not to be confused with the newer Lorraine II, originally opened in 1922, but was rebuilt internally in the Art Deco style in 1937, when it received its current appearance. This included the addition of a balcony, and an elegant Art Deco style marquee.

In 1998, a state of the art sound system was added. It is one of the few theaters in the state of Illinois (outside Chicago) which has such a high tech sound system. It was closed in 2012, but by 2013, there were plans to reopen it.

This is by far the best theater in the country. The best sound system the best leg room. I have been in the industry for years. I am extreamly saddened to here it may close. I understand what it takes to keep an older theater in operation. I understand the community needs as well. If Hoopeston looses this theater that will not only be a nail in the coffin for the theater but for the city as well. How many articles are out there boasting about the grandure of the Lorraine? I would bet hundreds. Even with the economy the way it is the city leaders MUST do what it takes to keep this icon open. Even if it means the tax payers supporting this wonderful theater. If the town looses this theater, it will be extreamly difficult to get families and businesses to re-locate to Hoopeston. Businesses look at other successes in the town and other failures. If the community and leaders of a community will not assist or unable to help keep a theater open for the people. The city doesn’t attract other potential businesses. The death of a theater often telss the future of a community. Businesses also look at the enrollment of schools in the area. If enrollment continues to decline new businesses tend not to re-locate to that area. Wake up – do not let this wonderful theater close. Do what ever it takes.

If this place is indeed for sale, why don’t the sellers post a link with the sale information? Price, yearly taxes etc. Then anyone who may have other buyers who might be interested, would have some type of link to forward. Why all the mystery between this page, and the story on CT’s “For Sale” page?

I’m afraid the end is near here

Although the interior of this theater could certainly be classed as Art Deco, the facade, apart from the marquee and boxoffice, is not. The building’s front is splendidly classical, and deserves to be noted as Beaux Arts in style.

Should the Lorraine close, it won’t be the first theater Hoopeston has lost. The August 14, 1915, issue of The Moving Picture World mentions a Princess Theatre and a Lyric Theatre in operation at Hoopeston. I would assume that both are long gone. There was also the McFerren Opera House, which was listed in the 1906 edition of Julius Cahn’s Theatrical Guide. A booklet published for Hoopeston’s centennial in 1977 said that the opera House had burned down on February 20, 1937.

The Lorraine theater closed a few months ago.

The Lorraine Theater is Reopening. We have started a foundation to restore It to her former glory. Lorraine Screen 2 is up and running public events. For more information go to https://www.facebook.com/www.lorrainefoundation or www.savethelorraine.com

Group Working to Save Hoopeston Movie House By Tracy Moss

HOOPESTON — It’s tough re-opening a movie theater in the middle of a rough winter.

“We just need the weather to cooperate,” said Jim Richards, a Hoopeston resident involved in the effort to save the historic Lorraine Theater.

The Save the Lorraine Foundation took over the theater last month after Hoopeston native Fontella Fraley Krout bought it from the bank that had foreclosed on the previous owner. Krout immediately donated the Lorraine to the foundation, which took possession on Dec. 13.

To keep the heat and lights on, the foundation began showing movies on weekends, beginning right after Christmas in the little Lorraine, a smaller theater about a block away that is part of the property. The foundation had a good turnout that first weekend for “Fast and Furious 6” and “The Goonies.”

But the next weekend, the winter storm that paralyzed most of Illinois blew into Hoopeston.

“It’s been a little shaky since then,” said Richards, who is gearing up for this weekend’s showing of “Dirty Dancing” and “Cars.”

The Lorraine Theatre opened in 1922, showing only silent movies until 1937, when Axel J. Claesson, a theater designer from Chicago, remodeled it into an art deco style theater. A sound system and restrooms were added then, too. In 1992, the projector system was upgraded, and a digital surround-sound system and speakers were added along with a new screen.

In 2007, longtime owner Greg Boardman sold it after almost 20 years, and the theater has struggled since then. A California man, Joshua Caudle, bought it in 2008, but by April 2012, the theater closed when the bank foreclosed on the property, according to Richards.

It has sat empty for more than a year, and in August, Richards and more than 30 other Hoopeston area residents met to discuss saving the theater. They decided to form the foundation to take over the property, which includes the Lorraine Theatre, and what’s known as the Lorraine II or little Lorraine, a separate store-front theater set up by the previous owner that is about a block and half from the Lorraine and seats about 50 people. But, Richards said, Main Source Bank could not donate the property to the foundation.

That’s when Krout heard about the situation through a Realtor friend and decided she could buy the theater and donate it to the foundation.

“I have fond memories of going there when I was young,” said Krout, who lives in Danville. “I would just truly hate to see it closed permanently.”

Krout remembers winning $90 one bank roll night, which was a lot of money to a 16-year-old in those days. But as an avid movie-goer, she was just as excited about the six-month free movie pass that came with it. Krout was at the Lorraine at least three times a week using that free pass.

“I probably saw some I didn’t even like,” she said.

Once the foundation took possession last month, Richards, president of the foundation, and the other members got to work cleaning the little Lorraine, which is in better shape than the Lorraine. The little theater is functional, and that’s where the foundation is showing the weekend movies for freewill donations. That should keep money rolling in to pay for heat in the Lorraine and other bare necessities, like liability insurance, until the group’s nonprofit status comes through, and they can begin fundraising and grant writing in earnest.

Richards said it will take a lot of money and work to restore the Lorraine, which needs its marquee repaired; some tuckpointing on the exterior and inside; new carpeting; a ceiling, heating and more. Richards said once the group gets its nonprofit status, it will begin getting estimates for the necessary repairs, so the foundation’s members will know exactly how much it’s going to cost to restore the theater.

In the meantime, they are committed to showing movies at and renting out the little Lorraine, not only to pay insurance and utilities, but to keep an active presence in the community.

“Showing we are a visible force rather than just letting the theater sit,” he said. “It’s a unique building. It was one of the premiere theaters here. … We need to put it back to that.”