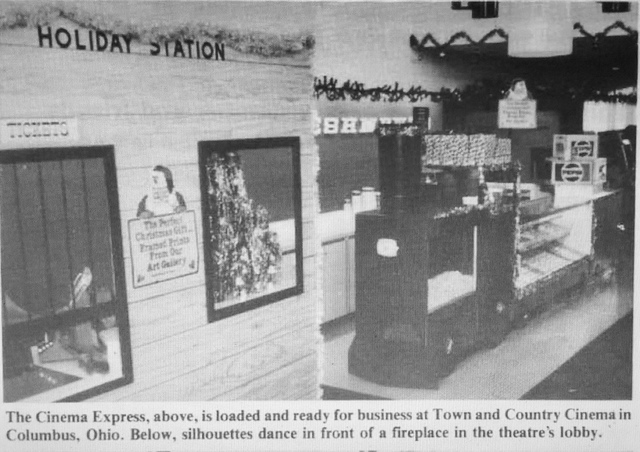 Built as a single screen cinema the Town & Country Cinema was opened on September 21, 1966 with Paul Newman in “Torn Curtain”. It was twinned on May 20, 1977 with screening of Muhammad Ali in “The Greatest” & James Coburn in “Cross of Iron”. It was closed by General Cinema on September 25, 1986.

This cinema was at the intersection of East Broad Street and Robinwood Avenue, on the south side of Broad Street.

A few blocks further east, also on the south side of Broad, was the Cinema East. Its address was 4177 East Broad Street in Whitehall. It was a large first-run single-screen theatre, probably built in the early to mid 1960s.

I looked this theatre up in the Columbus Dispatch (Dispatch.com) online archive. Although I could only read the first few sentences of each article without paying, I did learn the following facts:

The theatre closed as a General Cinema on Thursday, September 25, 1986. Acccording to a Dispatch article published the previous day, “General Cinema Corp., which has run the East Side twin-screen theater since its opening in 1966, had no intentions of closing the theater, which was doing well, said Hubert Bourne, General Cinema’s district manager.” Perhaps someone can look up the full text of this article and find out why it actually closed.

In March of 1989, a stage company called Columbus National Theatre signed a lease to convert this cinema into a three-stage complex. They were supposed to open their first season the following July, but ran into problems with building inspectors. It’s not clear whether they ever in fact occupied this building.

In July 1991, the Whitehall City Council turned down a proposal by Columbus Cinema ‘n’ Drafthouse to reopen the venue as a second-run cinema serving beer and wine. Later that month, the Ohio Supreme Court somehow overruled the city council, so Cinema ‘n’ Drafthouse proceeded with their plans.

Also, the street address was 100 Robinwood Avenue in Whitehall.

The Cinema Grill was still operating here on January 1 and 2, 1994, when the Dispatch says it showed matinees of a G-rated animated film called “We’re Back! A Dinosaur’s Story”.

I worked at Cinema East, just down the street, while my brother worked at Town & Country. He and his friends used to collect large popcorn buckets and even soda cups after the features, and then resell them while pocketing the money. Eww. Anyway, seeing a movie at Cinema East was always a better experience, since it had a single, large screen (and balcony).

I know I saw Superman and Superman II at Town & Country. It’s true, there was nothing remarkable about the place, and it won’t be missed.

T&C Cinema, wow, this sight is really bringing back memories, cant imagine movie complexes being in the areas that they were like this one. Don’t really remember what movies I saw here, but did see a few. Lived on far east side of Columbus, and frequently Whitehall for grocery shopping, movies, drive in, Massey’s Pizza etc. from late 60s through my formative years.

I remember those ‘early bird" 50 cent matinees. I saw a fair number of movies there including Torn Curtain, Penelope, Hombre, Glen Ford in Rage, The Stalking Moon etc. I always liked the theatre but Jlgreenlee ’s comment about the Cinema East is true, that was a classy place – I belive it opened with a roadshow of Lord Jim, but I remember seeing a wide range of films there from Caprice to a sneak preview of Viva Maria! .

Hmmm I thought I saw SUPERMAN at Cinema East, but maybe it was at Town & Country. I know I saw PORKY’S (1982) at T&C. My friends saw it before me because they were either 17 or said they were and I said “I’m 16”…so I waited in the lobby and then we all went back thru the line and this time I said I’m 17 and we all saw PORKY’S. As a kid I saw Disney’s SLEEPING BEAUTY on re-release there as well.

This reopened with two screens on May 20th, 1977. Grand opening ad posted.