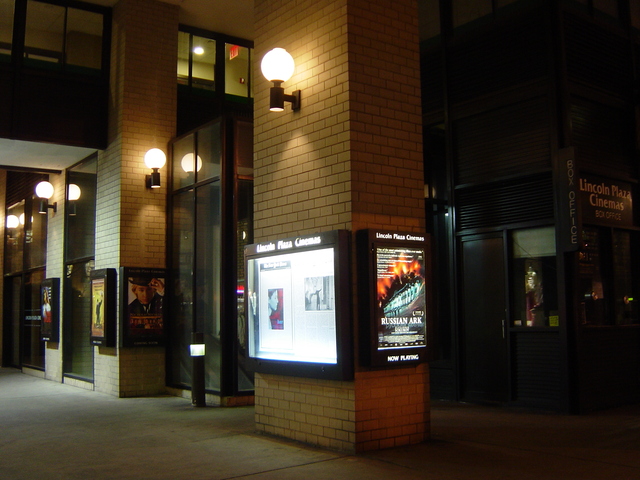 Located at Broadway and W. 63rd Street. Opened on April 8, 1981, this below-ground facility, functional and uninspiring in appearance, became one of the finest art houses in Manhattan, showing the best in new foreign and independent films. Located on the west side of the city, almost directly across from the cultural hub of Lincoln Center, it was an indispensable mecca for the mega-legions of area cinephiles. It was expanded to six screens on October 23, 1992.

It was operated by Dan & Toby Talbot in association with France’s Gaumont chain for 36 years. Sadly Dan Talbot passed away on December 29, 2017. The Lincoln Plaza Cinemas closed January 21, 2018. It is hoped after some structural work has been done a new operator will take over the cinema. The theatres space was still vacant in June 2019.

this theater closed the end of Jan. 2018 after 30? years in business. the building management company
said it would reopen after necessary structural building renovations were completed. basically wasn’t that one big fib?

Ann Logan, 71, yelled directions to customers as she sat in her walker; Norma Levy, 76, sold tickets from rolls of red paper stubs and stashed money into a little metal box; Rita Lee, 88, helped sell refreshments at a foldout table. When the movie ended, ushers hurried to wheel walkers and rollators back to older guests waiting in their seats.

It wasn’t a sellout, but it was a decent showing for a 43-year-old French film on a chilly Saturday night.

New Plaza is a newcomer to the city’s independent cinema scene, and it’s trying to establish itself at a time when independent theaters are in a death struggle with streaming video and a generation of moviegoers demanding in-theater craft brews and plush recliner seats.

New Plaza also has something of a chip on its shoulder.

And ever since its landlord, Milstein Properties, declined to renew its lease, the theater has sat in a ghostly state on 63rd Street and Broadway with a blank marquee.

But as the city marched on with cold indifference, a band of seniors and retirees who live in the neighborhood refused to accept its demise and founded New Plaza Cinema just across the street.

They operate their nonprofit theater in a generic auditorium that they rent out twice a month from the New York Institute of Technology. A sandwich board on 62nd Street announces their presence. On weekends, they set up a volunteer recruitment table on Broadway beside a handwritten board that reads, “Do You Miss Lincoln Plaza Cinemas?”

Barry Schulman, 72, a retired television executive who helped found the Sci-Fi Channel, was selling candy bars from a wicker basket at the “Mr. Klein” screening. He explained why he joined the cause. “After I retired, I didn’t move to the Upper West Side just so I’d have to get on the subway and go to the Angelika,” he said.

The ultimate goal is lofty: unsatisfied with New Plaza merely being a pop-up cinema, the organizers want a full-time theater of their own, but securing such a space would probably cost millions. A strategy meeting was recently held over banana bread at the New Plaza president Norma Levy’s apartment in Lincoln Towers. Their big hope is that wealthy donors will bankroll their movie house.

“This city is full of wealth,” said Ms. Levy, a retired lawyer. “Three million dollars is nothing to some people. We only need one of those people. Maybe two. We’ll let them name the place. ‘The Mike Bloomberg Theater.’ Whatever. All we need is the theater, and we’ll do the rest.”

It won’t be easy. The city’s old art houses and independent theaters have been vanishing. Recent closures include the Sunshine Cinema on the Lower East Side, the Beekman Theater on the Upper East Side, City Cinemas on 86th Street, and the stately Paris opposite the Plaza Hotel. They close because of high rents, expired leases, and shifts in modern moviegoer habits.

Tellingly, as of a few weeks ago, the Paris will now be getting a second life, but only because Netflix leased the refined single-screen theater as a showcase address for its prestige releases.

As the old guard institutions fade, a slick new era of art houses is rising. The revitalized Quad Cinema in Greenwich Village sells organic wine at its bar, and the Metrograph on Ludlow Street has a restaurant that serves koginut squash salad. Last year, possibly sensing change in the air, the longstanding Film Forum on Houston Street underwent a $5 million dollar face-lift.

New Plaza’s single-screen auditorium seats 259 people. Recent screenings have included “Pavarotti” and “Tel Aviv on Fire,” and they’ve shown classics like “My Dinner With Andre” and “The Conformist.” After Philip Roth died, they ran a marathon of movies adapted from his books.

Ms. Levy declined to detail the operating costs and revenue of New Plaza, but she said they break even with their ticket sales, and that senior tickets make up the bulk of their revenue.

“Do we need younger faces?” she asked. “Yes, we do. But right now, we have an army of bright and dedicated people who have life experience. It might be time as a society to look at older people differently in terms of what they’re capable of and can create for society.”

In this brutal environment, they have one idea that might get them attention.

Woody Allen’s new film, “A Rainy Day in New York,” hasn’t had a New York premiere, and there are no current plans for its release in the United States. (It opened in September in Paris to lines spilling down the street.)

“No one in town wants to touch it,” said Gary Palmucci, 64, New Plaza’s film curator. “We did a show of hands here, and about 85 percent of people were in favor. I think we’ve decided we’re not so worried about picketers and we think it would be worthwhile to show.” He added: “We’re all over 50. We’ve lived in this world a lot. We view certain transgressions differently than college students.”

As the second anniversary of Lincoln Plaza Cinemas’ closing approaches, there lingers the thorny and awkward matter of the shuttered art house itself, which seems tantalizingly available.

Lincoln Plaza Cinemas was opened in 1981 by Dan and Toby Talbot. The pioneering couple is credited with helping start the art-house-revival movement in the 1960s with their bold programming at the The New Yorker Theater on 89th Street and Broadway (Woody Allen and Diane Keaton argue in its lobby in “Annie Hall”).

Lincoln Plaza Cinemas was the fourth and last theater the Talbots operated, and the first film to play there was Federico Fellini’s “City of Women.”

For years, Howard Milstein, who owns 30 Lincoln Plaza, has been the landlord of the cinema. Mr. Milstein, who is the chief executive of Emigrant Savings Bank, is a member of a New York real-estate dynasty that Forbes once ranked the 90th wealthiest family in America.

In December 2017, Milstein Properties declined to renew Lincoln Plaza’s lease, saying that the theater required vital repairs. In a statement the company suggested that it would reopen the space again as a cinema, although it said little else.

Outrage quickly spread through condominiums on the Upper West Side. Critics and journalists wrote odes to the cinema’s leaky ceilings and stiff seats. But the closing date held firm. Mr. Talbot, who had been ill for some time, died later that month at 91. Lincoln Plaza Cinemas’ last day of operation was Jan. 28.

“We initially called him and asked to rent the space and keep running the cinema on our own,” Ms. Levy said. “A couple days later, a lawyer called us up and said, ‘Mr. Milstein is a very generous man. But not when it comes to money.’ He explained we’d need to come to the table with lots of money for anything to happen.”

A spokeswoman for Milstein Properties said that the company is still searching for a new tenant and that its “vision is still to reopen the space as a cinema.”

These days, Toby Talbot, 91, has been busy finishing her husband’s memoirs at their sunlit apartment on Riverside Drive, which is filled with posters of movies by directors like Bernardo Bertolucci and Claude Chabrol that once premiered in their theaters.

The closing of Lincoln Plaza Cinemas remains a sore spot. “He keeps our name on the marquee,” she said. “What nerve.”

She’s rooting for New Plaza. “I give them my blessing,” she said. “I want them to succeed. This was our life’s work. Dan and I were educating people, and why should that education have to stop?”

If a recent Saturday night at New Plaza was any indication, word about the cinema was getting around. An eager crowd entered to see “Fiddler: A Miracle of Miracles,” a documentary about “Fiddler on the Roof.” Two ushers, Naomi Rossabi, 83, and Ruth Mucatel, 91, took tickets. During their downtime, they groused about going to the movies today.

“We hate reserved seating,” Ms. Rossabi said. “What if we’re stuck behind a tall person?”

“Young people are used to getting everything easy,” Ms. Mucatel said. “We know what it means to have to wait for things.”

But a gloomy note soon entered their conversation.

“I heard the New York Institute of Technology is selling off their property in the area,” Ms. Rossabi said. “We don’t know if this space will always be here for us. Some of us are worried.”

In fact, the school recently put a 12-story campus building on 61st and Broadway up for sale, just down the street from New Plaza’s auditorium. But a spokesman for the university said there’s no cause for alarm: those plans don’t involve their space, and New Plaza’s arrangement is secure at least until May.

But considering the travails of New Plaza Cinema, perhaps it still felt like too close a call.

“I hope this isn’t all just a pipe dream,” Ms. Rossabi said. “Because something magic still happens when you go to the movies.”

since the space the theater occupied was build for that purpose when the apartment building its below was built. so what is the space being used for now?

I’m not sure bigjoe59, but this building is turning 40 in April. It was one of the first modern indie multiplex cinemas in the country and later on in its life competed against the Lincoln Square cinema with its share of indie movies that often premiered there and they still do although its still closed due to the pandemic that has affected the NYC cinemas since March of last year.

thanks to br91975 for the info. when the theater closed Millstein properties the building owner said the closure was necessary because of “structural maintenance” had to be done to the building. if said “structural maintenance” has been done why hasn’t the theater reopened? in the say 3 years before the theater’s closure whenever I went it was always well attended. plus this theater had what might have been the best concession stand in the city.