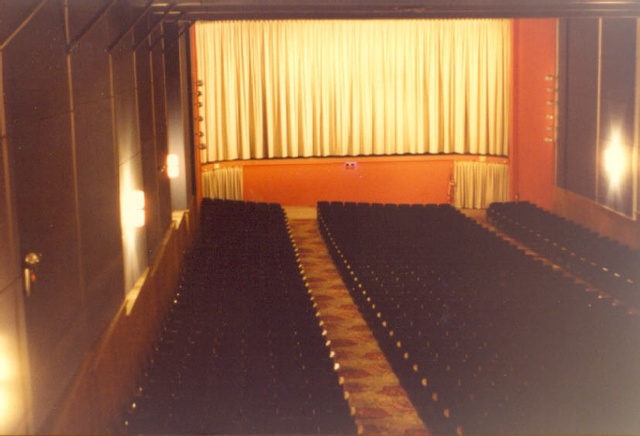 As the first large building for recreation on the Ocean City, NJ boardwalk, this opened in 1905 as a bowling alley named Moore’s Bowling Casino. It appears to have been the main attraction on the boardwalk in those early years.

It changed to a 1,600-seat movie theatre on June 19, 1922 named Moorlyn Theatre and has been one ever since. In July 1929 the theatre was moved 355ft toward the ocean, so it connected with the Boardwalk. It was divided in two in 1970 and into four in 1989. Closed for a while, the original building was mostly demolished and rebuilt in a different style. The theatre became one of only two theatres on the Ocean City Boardwalk.

It was operated by the Frank Theatres chain from 1989, it closed temporarily for the Winter season each year. It was taken over by the Ocean City Tabernacle and renamed Moorlyn Family Theatre. They closed it in February 2018 and it was put up ‘For Sale’. In November 2022 it was purchased by Town Square Entertainment with plans to reopen in summer 2023.

It is now owned by the Ocean City Tabernacle. A newspaper article from a couple months ago stated that the Tabernacle would use a few screens for family movies.

Joe Vogel – I’m just now seeing your link to BOXOFFICE and the pictures of the Moorlyn. That is So Cool! I remember that entrance. The stainless steel had been painted white (as you see in my picture at the top of this page)and I kind of thought that it was probably Stainless originally. Very cool photos. Believe it or not, I have the one of the original neon “O"s from the MOORLYN sign in that art deco style. Thanks for the link.

Wonderful news. Glad the Frank’s are out.

Seth Basacas that was one of the best speehes on the love of the theatre and cinema I’ve ever heard.

That is a great video.

Is this theater still open?

The March 4, 2018 issue of CCNJ Daily said that the Ocean City Tabenacle had closed the Moorlyn Theatre and listed it for sale. The March 13 issue said that the building had been sold to Sey West Realty Partners LLC of Ocean City. I haven’t found anything about the purchaser’s plans for the property, but there are no listings on the Internet so the theater remains closed. It was last operated by Ocean City Tabernacle under the name Moorlyn Family Theatre.

Trying to update my original description… The Moorlyn was built in 1905 by William G Moore as a bowling alley (Moore’s Bowling Casino). The second floor, overlooking the boardwalk, housed the “Casino Club” which offered dancing, music, and billiards. In 1922 the bowling alley was converted to a theater with about 1,600 seats and was renamed: The Moorlyn Theatre. It opened on June 19, 1922 The adjacent street, Moorlyn Terrace, was created in 1901.

In July 1929 the building was moved 355 feet toward the ocean to connect to the new boardwalk of 1928. New sound equipment was installed for the first time.

It was purchased in 1931 by William F. Shriver and was operated by Shriver and later his daughter, Helen, until 1989 when it was sold to the Frank Theater chain.

By 1931, Shriver owned or operated all the boardwalk theaters in Ocean City, including the Strand, Village, and Showboat.

Although the front half of the building was replaced in 2002, the auditorium area is still from the original bowling alley, making it the second oldest surviving building on the Boardwalk (after the Champion Building next door, that housed Simms' Restaurant).

Sold to local chain Town Square Entertainment for $1,350,000. They hope to be showing movies here by summer. Inquirer.com story with vintage and recent pictures here.

This is awesome news.