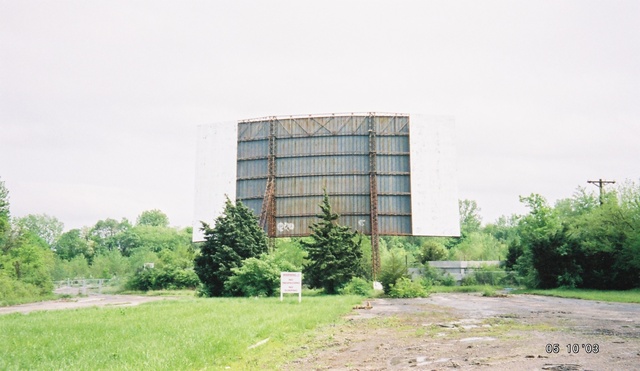 Located in the Lawrence Township district, northeast of Indianapolis. The Drive-In opened June 6, 1940 with Kay Kyser in “That’s Right, You’re Wrong”, making it one of Indiana’s earliest drive-ins. It could accommodate 500 cars. Around 1954/1955, it was renamed Pendleton Pike Drive-In. It had a long life, closing on September 7, 1992 with Clint Eastwood in “Unforgiven”, Edward Furlong in “Pet Sematary II” & Mel Gibson in “Lethal Weapon 3”. For many years all that remained was the screen, which was demolished on August 27, 2008.

I know it was owned by General Cinema but they didn’t run it to the end. They leased it to a local independent but I can’t think of the name. They were the largest indy in Indiana but had a tendency of not paying employees. I never worked the booth but had been told they had the platter system but the platters weren’t the ones GC had and they were plywood and the roof leaked right over the platters. When GC took it back it spring ‘93 they considered running it themselves but it was going to be to costly to repair the booth and concession area.

Anyone know why this theater was really closed? Was it do to not enough buisness, owners got into debt and couldnt afford it? I remember going to this theater and wish there was one close like that one was and it would be cool if someone opened it back up and got it running again cause I hate going all the way to Tibbs to go to a Drive-In.

The site was razed about 2008-09 and a Monarch beverage warehouse was built there.

After a few delays, it opened on June 6th, 1940. Grand opening ad in photo section

I can’t find any evidence that this drive-in was ever called the Lawrence. Its name in its grand opening ad is simply Drive-In, and on the first drive-in list in the 1942 Film Daily Year Book as “Drive-In Theater, Pendleton Pike, Indianapolis”.

The Pendleton Pike Drive-In appears to have closed for the season on September 6, 1992 with a triple feature of “The Unforgiven,” “Pet Semetary 2,” and “Lethal Weapon 3.” It promised to reopen in 1993 but there is no evidence that it did.