The Americana Theatre was located along Van Nuys Boulevard in Panorama City, and opened as a single screen theatre on September 18, 1964 with Michael Callan in “The New Interns” & Fabian in “Ride the Wild Surf”. It was designed by architect Edward C. Jenkins for Lippert Theatres. For a while it was leased to Loew’s. This stretch of Van Nuys Boulevard developed in the suburban boom in the San Fernando Valley after 1945 along with the surrounding neighborhood supporting many restaurants, department stores and other retail establishments. Later an additional four screens were added, designed by architect Gale Santocono, two with 300 seats each and two with 400 seats each.

In the 1980’s, the area began to decline and by 2000, most of the fine places dating from the post-World War II suburban boom had disappeared as had the Americana 5. It was finally operated by Mann Theatres. It now houses a beauty school and sporting goods store.

TO BIGDGIB: I think I remember you making the recordings for my dad. Not by your name, but by who he thought had the best voice Its been 40 years, wow. Wish I had your e-mail addresswould like to talk to ya.

I worked at the Americana from before it opened-got hired to be an usher, but worked getting the theatre ready for its opening. I worked there for a couple of years while I was in college. It was a great job.

Hadn’t seen your comment when I first posted. I was nostalgic for days gone by and was tracking down some landmarks from college years. Most are gone now of course. I was sad to see what the Americana Building looks like now. I remember Phil Ahn’s restaraunt next door, and the vacant lot where they set up a Santa’s Village every year.

I was an usher when it opened and then asst manager when Gary(?-it’s been a while) left. It was a good job to have for a college student.

I have a memory that’s been with me all this time. I stood in the lobby and took tickets sometimes. When they built the theatre, they didn’t put a clock in the lobby. On Saturday matinees, I could tell when a child wanted to know what time it was when they came into the lobby. I would sneak a glance at my watch, and then when they asked me, look up a the tall wall behind the candy counter, and then say 4:15. The kid would look at the wall but couldn’t see a clock, then walk away puzzled.

@Cate – Yes it was I (Dave Wilson) who did the recordings for Stan. I really had fun doing them. I remember having a lot of fun with the titles. Though I must admit it would get frustrating when I would trip on a word at the end of the long recording and have to do the the whole darn thing over again! Remember Ernie Lyle? He’s the one who hired me. dvd dot wlsn at yahoo dot com

I don’t know about Mann/Pacific but in an August 1991 edition of Boxoffice, it was cited that CinemaCal Entperises operated the theatre at that time.

I worked for AMC Theaters as a manager from ‘96 to '98, and when I found out this theater had just closed down, I tried my darndest to try to buy it and reopen it as a second-run theater. I went nowhere, fast, LOL. I think this beauty school has been there since it closed.

Linkrot repair: The article about the four-screen annex to the Americana in the April 20, 1970, issue of Boxoffice can now be found at this link.

Robert Lippert opened the original, single-screen Americana on September 18, 1964. It was the annex which opened in 1970. The ad in the photo section is from that event.

September 18th, 1964 LA Times grand opening ad as well as a January 1970 ad about this cinema in the photo section 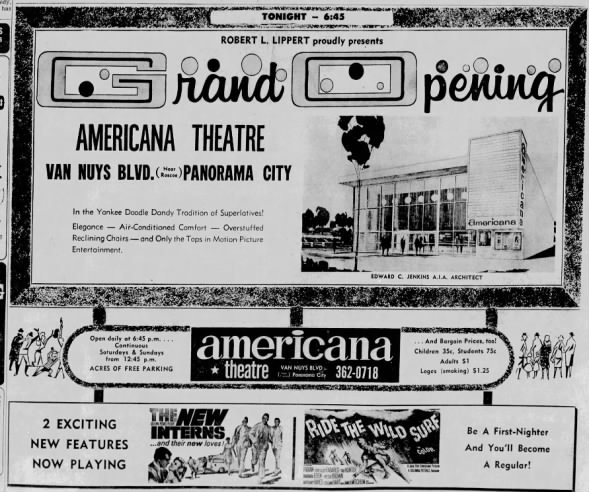