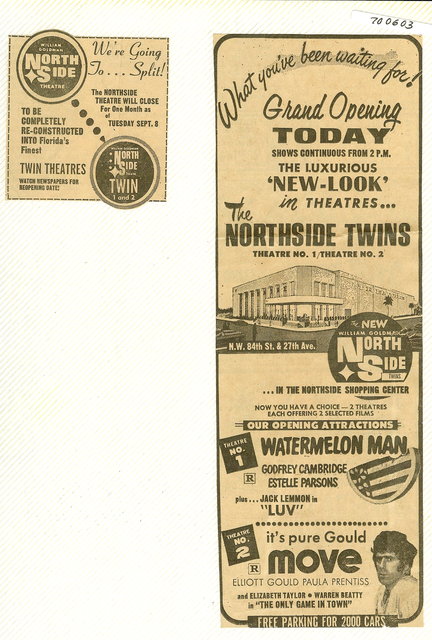 William Goldman opened the North Side Theatre on January 31, 1968 with Spencer Tracy in “Guess Who’s Coming to Dinner”. This luxurious single screen theatre next to the busy North Side Shopping Mall. It was twinned on October 14, 1970. The neighborhood quickly changed and the theatre was probably too large to serve the eventual predominantly African American audience.

This theatre was the only South Florida house that played hit first-runs on double feature in a desperate attempt to fill the house. This theatre had the exclusive Miami run of “Sweet Sweetback’s Baadaasss Song” since downtown houses refused to show it for fear of rioting. It had closed by 1984.

I was recently informed that the amusement park behind the North Side Mall and home to the morning Rick Shaw Show go-go girls was segregated to whites only, well into the sixties. Does anyone have any information on this?

Al, can you possibly re-link that picture of the NorthSide?

Also anyone with Miami theatre interests, check out my blog at http://www.myspace.com/seriousexploitation

Called Heart of the City, the club would feature disco dancing, pulsating light shows, giant video screens and have a license to sell liquor until 6 a.m., according to backers.

“It will be a sight to see,” said project consultant Peter Izaak. “One large room, about 25,000 square feet, with a 52- foot-high ceiling. The whole building is being repainted. The asphalt parking lot is going to be turned into a garden.”

But first the proposal must be approved by the Metro Zoning Appeals Board. The panel is scheduled to hear the application at 9 a.m. Nov. 14 at the Dade County Courthouse, 73 W. Flagler St.

A few months ago, Heart of the City Inc. signed a 27-year lease to occupy the free-standing theater at the north end of the shopping center. The movie operation was closed and the theater gutted, leaving one large, high-ceiling room.

Transforming the empty shell into Heart of the City will cost an estimated $2 million.

Dr. Thomas Ferguson, listed as chief executive officer of the corporation, could not be reached, despite messages left at his home and office.

Lawyer Gerald Greenspoon, an investor in the project, said financing will not be a problem because “the funds are already in place.”

Greenspoon would not identify the other investors.

Joe Zamore, a consultant in charge of lighting and technical matters, said the Liberty City entertainment center will be “bigger than Club Z,” the trendy Miami Beach disco whose lighting he also helped design.

“We’ll proably be filming a syndicated television show out of here as well as MTV shoots and other production work,” Zamore said.

The club will attract plenty of celebrities, Zamore said. If all goes according to plan, it should be ready to open before the New Year, he added.

Although Zamore said community sentiment is “100 percent” behind the project, not everyone is acquainted with Heart of the City.

“I haven’t heard of it,” said Dorothy Baker, executive vice president of the Miami-Dade Chamber of Commerce, a black business group.

“I’ve heard that term. But this is the first time I’ve heard what it means,” said Al Guilford, president of G and G Wholesale distributors and civic activist.

“I think it would be a plus for the community,” he added.

Northside manager Don Stevenson, whose 79th Street shopping center lost Sears as an anchor client last year, agreed. “It’s a very ambitious undertaking,” said Stevenson. “But I’ve spoken to them and they don’t seem to have any difficulty handling it.”

Opened as a twin on screen 1 with “Luv” and “Watermelon man” and screen 2 with “Move” and “The only game in town”. 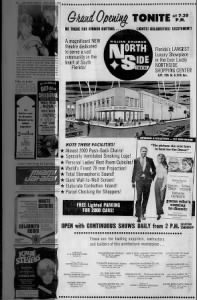