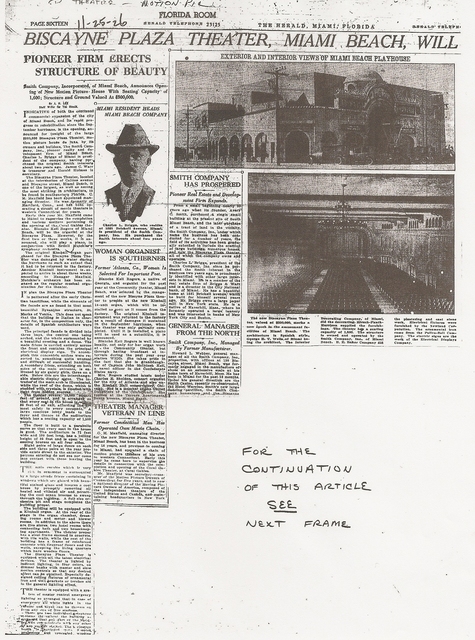 The 1,500-seat Plaza Theatre opened November 25, 1926 with Jean Hersholt in “The Old Soak”. During construction a Kimball organ was being installed but it was water damaged during a September hurricane, and had to be returned to the Kimball factory. A new Kimball 14-unit organ was on order, but had not arrived for the opening night. Organist Blanche Keil Rogers (originally from Atlanta, GA) played piano with the theatre orchestra on opening night and until the new organ was installed several weeks later. The Biscayne Plaza Theatre was second theatre to be built in Miami Beach. The theatre was designed by architect George E.T. Wells of Miami. It was located on Biscayne Street (now known as South Pointe Drive) between Collins Avenue and Washington Avenue.

My family moved to Miami Beach in 1953 and I remember seeing this theatre from the outside only. The Biscayne Plaza Theatre had closed its doors by then, for that part of South Beach had deteriorated. It was demolished in 1959.

The address for this theatre should be 206 Biscayne Street.

A note for anyone trying to find this location on a map —“Biscayne Street” in Miami Beach has been renamed “South Point Drive.”

I assume they renamed it so it wouldn’t conflict with “Biscayne Blvd” over in Miami.

The Biscayne Plaza closed in 1951. It was renamed Plaza when Wometco took it over in 1935.

Article on Biscayne Plaza opening in 1926.

According to Boxoffice Magazine, this location was demolished in 1959.

Mike, that paper has two other interesting finds.

The First is the re-opening of the Fotosho which had been torn down and rebuilt that year on the same spot. The second is the ad for the Cameo in Allapattah which I had never heard of.

The Riviera mentioned in the copy was in Homestead.

A very good shot of the Biscayne from the “Images of America” series (p.41) By the marquee, this was taken September/Fall of ‘27.

Better quality ad posted below: click to zoom in 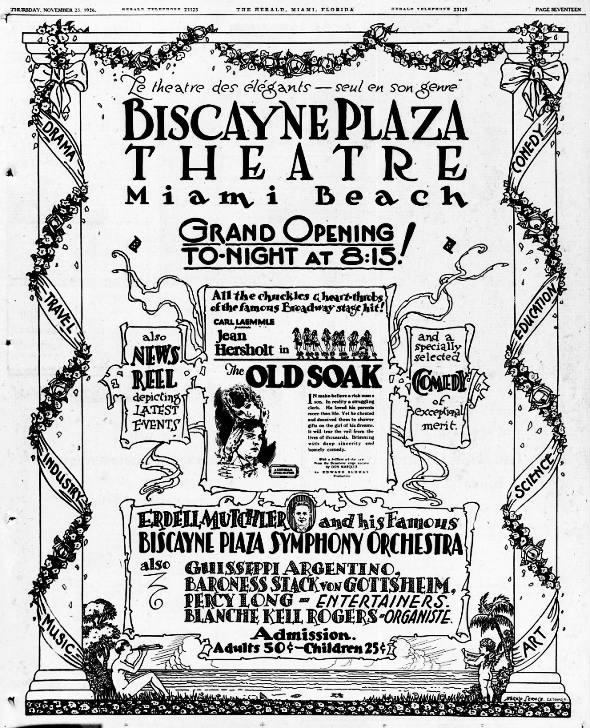 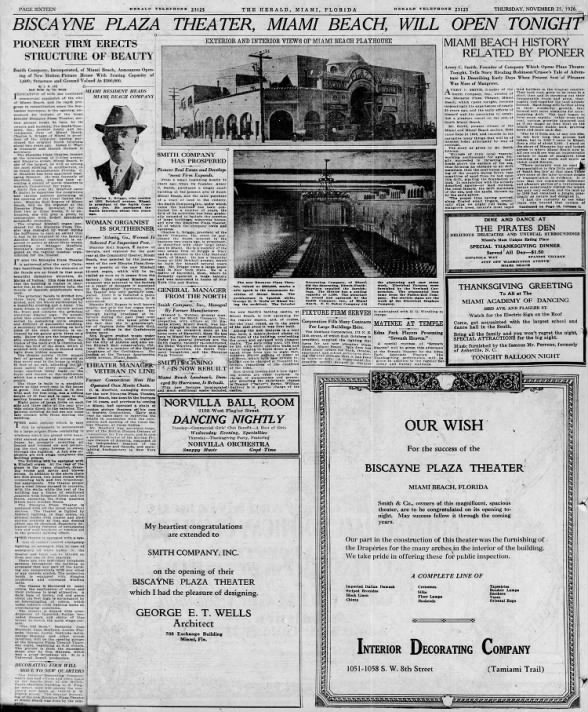