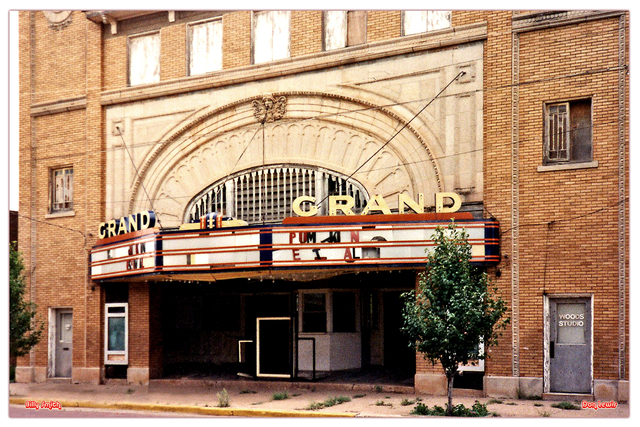 This large and very attractive theatre is about the only presentable building in the run-down town of Electra. It was built in 1919 for $135,000, and was first used as a vaudeville house. The theatre features a yellow brick facade with short towers on either side, and a very nice lobby transom with petal shaped panes.

The marquee is blue and orange, and appears to be from the 1940’s. The Grand Theatre closed in March 1974, but was open for a short time later. This was then followed by years of neglect and a faulty roof.

It is now owned by the City of Electra and managed by the 501©3 nonprofit Electra Grand Theatre Inc., the Grand Theatre is the location of occasional community events between renovation projects. The Grand Theatre is still a ‘work in progress’, and funding is underway in 2013 for the restoration of the proscenium arch. Tax deductible donations to the project may be sent to the Grand Electra Theatre, Inc., 101 N. Main Street, Electra, Texas, 76360.

The historic theatre was designated a Registered Texas Historical Landmark by the Texas Historical Commission in 2006, and the local Main Street organisation offered free Friday morning tours of this historical treasure in downtown Electra.

Following restorations, the Grand Theatre was reopened in June 2019 as a live music/concert venue.

You should see the Grand Theater now. The outside has been restored to the original condition. Alas there is much to be done on the inside. This is a project taken on by The Electra Historical Society and local persons interested in this project. Ways to raise funds for the interior are being discussed and local volunteers are working to clear the interior of trash that is still inside. Some personal donations have helped get us this far and any others would be greatly appreciated.
Electra Historical Society
1oo N. Cleveland

TexasEscapes has a few small pictures and a brief essay about Electra’s Grand Theatre.

Here is an undated photo:
http://tinyurl.com/kkhsdk

From 1990 a photo of the Grand Theater in Electra Texas.

Architect William Clayton Meador was active from around 1909. I’ve been unable to find out anything about his parter, except that his surname was Wolfe, not Wolf. The partnership does not appear to have lasted long in any case. I’ve found references to several projects attributed to Meador alone, from the 1910s, the 1920s, and the 1930s, but the Grand Theatre and a 1919 church in Archer City are the only projects I can find attributed to the firm by any source available on the Internet.