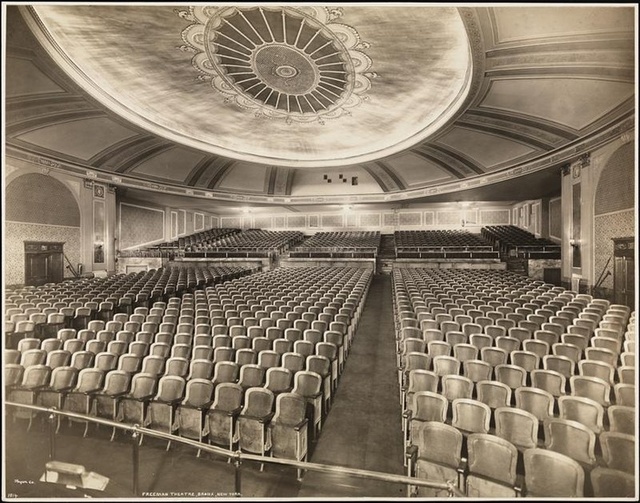 The Freeman Theatre opened around 1922 with a little over 1,600 seats. It was located on Southern Boulevard between Freeman Street and Home Street.

The Freeman Theatre closed during the 1970’s, and sat vacant until it was demolished in early-2015.

This theatre opened no earlier than 1922 (it was under construction when sold to the operator of the City Hall Theatre in August of 1922). It was operated for a time by Loew’s and, judging by the photo at this link,
http://bronxblotter.home.mindspring.com/old/freeman_old.jpg,
featured Spanish programming in the 1970s.
Images from 2002 can be found here:
View link
View link

REMEMBER THE SMALL FISH POND IN THE LOBBY. THE BICYCLE RACE MOVIES ON SATURDAY ALONG WITH TWENTY FIVE CARTOONS? I SAW FRANKIE LYMAN THERE LIVE IN THE FIFTIES. GREAT MEMORIES.. PICTURE TO FOLLOW BOB T

Was turn into a spanish movie house for some time.

I went to the Bronx Zoo on Saturday and I took the #2 train. While looking out the window I noticed the “Olympic Concert Hall” aka “Prospect Theater” looking very dilapidated and with a “for sale” sign on the marquee. It was disconcerting since the rest of the neighborhood looks like it’s in the middle of a building boom and supposedly the theater had been renovated recently. Anyway, the reason I mention all of that is because I was born in the Bronx and I asked my mom if she had gone to the Prospect. She said it was one of her favorite theaters, but that she usually went to The Freeman. As a matter of fact, she went into labor (with me) while she was attending some Spanish language movie on November 23, 1959!

I love the fact i I decided to come into the world while I was actually IN a theater!

Also, thank you Warren for that picture of the auditorium. It meant a lot to me to be able to see it. I wonder how much, if any, of the interior remains.

We went inside the Freeman Theater two weeks ago and nothing is remaining as it’s totally dilapidated (certainly due to water damage after years of vacancy).

This theater has recently been demolished to make way for a school. A small section of it will live on as part of a retaining wall for the higher elevation houses behind it. The slope of the main seating area took advantage of the hillside it was built into.

Photos uploaded of the marquee in the day, the interior and the empty building before demolition.