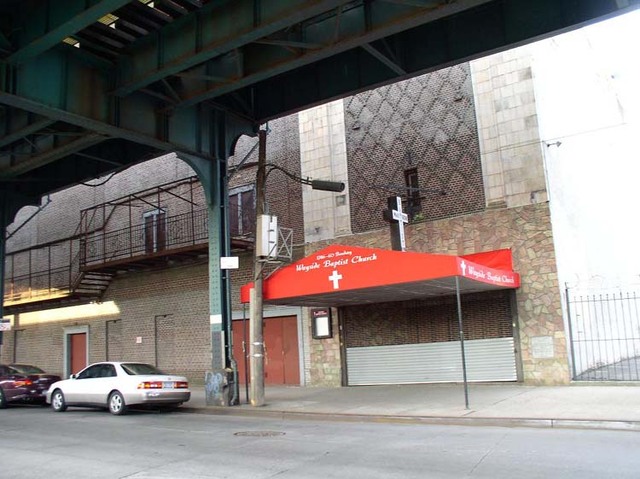 The Colonial Theatre building is located on Broadway in the Bushwick section of Brooklyn. The block it stands on is bounded by Broadway, Rockaway Avenue, and Chauncey Street. It opened as the New Colonial Theatre in 1921, on the site of an earlier Colonial Theatre(1912-demolished 1920), which had an open lot adjacent to it in where outdoor movies were shown in the summer. It was equipped with a 2 manual Marr & Colton organ.

The ‘New’ Colonial Theatre was closed in 1963. It is now the Wayside Baptist Church.

Airdome is (was) another name for an open air, outdoor theater. They may have projected films on the side of a building, or an outdoor screen, probably only after dark.

Here’s the cover of the 1916 program from the Silent Film Still Archive site.

Hello to one and ALL, as a somewhat ‘newbie’ to these boards (haven’t posted in quite a while now), I’ve been absolutely amazed and pleasantly surprised by what I’ve been reading here. As a now 20 year resident of Bushwick it seems the more I find out about the ‘former’ Bushwick, the more there is to learn.
What I’d really LOVE to see posted here though are ‘photos’ from the past (‘30’s-'70’s if possible), which would give me a somewhat better idea of what it was like back then. My 17 year old nephew who has Aspergers Syndrome also has a fascination with 'things from the past’ (usually to do with trains though) as well, and is very interested in ‘old Bushvick’.

Would anyone here happen to know the name of the building that is almost at the end of the block on ‘Vanderveer Street’ (it looks like some kind of factory or warehouse from many years ago, wouldn’t mind renovating it if I had the money, and maybe even renting it out), at Bushwick Avenue? I’d heard something about a ‘sugar factory’ but wasn’t certain if it’s the same building. Also, I attend Pilgrm the Reformed Church (133-44 Broadway), which used to be a theatre a while back, but wondered why the city did not want to try and preserve the “carriage house”, which is located around the corner on Gates Avenue? I LOVE old buildings like the ones mentioned and if I had the funds, would fix them up, keep a portion of their former beauty and if possible, rent the building out to those who felt the same way (then again, I’d like to bring back the ‘trolley’ system in some form as well).

So, would anyone here know anything about the two buildings mentioned (if you Google 69 Vanderveer Street, where the dead end is, you will see the building I’m talking about), and how I can get further info on them? Thanks for your help, your memories are great. It’s kind of sad that so many had to flee this area, and that not even their children want anything to do with it now. It’s changed alot and I’d LOVE to see the black, latino, white, etc. in this section ALL come together to make it even better. Take care everyone.

Jseven, I lived just three blocks from there on Bushwick Avenue, a long, long time ago, and though I had a friend who lived on that block, I only vaguely remember the factory. I have old family photos from back then, some of the elevated train tracks, which still look much the same. The building at 133 Broadway was the HQ of the Williamsburgh (note the H) Savings Bank for as long as I can remember, now an HSBC branch. Don’t remember there ever being any theater there. We’re not supposed to get too far afield from theater info on this board, but if you look at earlier posts you’ll find other boards listed such as Bushwick Buddies, where people post info about the neighborhood. 133 Broadway is adjacent to the Williamsburg Bridge. The climactic scene of “The Naked City” (1948), directed by Jules Dassin, was filmed on the bridge, and the building can be glimpsed.

Sorry, Jseven, forgot to add, you can probably contact the city’s Buildings Department for info on the factory.

jseven, I think your comments about the current Pilgrim Baptist Church concern the old, and much lamented, Loews Gates, which closed in 1977 and has served as Reverand Roy Brown’s base since the early 1980’s. This theater has a page on this site that I just linked below. Hope you enjoy it.

Our first apartment after arriving in 1951 was at 1730 Broadway, right down the block. I remember a “Refrigerated” banner hanging from the marquee. A few years later we moved around the corner to Rockaway Avenue. Across the street from that apartment was an owner-operated laundry. I became fast friends with their son, Ziggy, who was only there on Saturdays. Since they put a Coming Attractions poster in the window, they got free passes, so Ziggy and I went to the movies just about every Saturday. The majority of features on Saturday were B-list films, i.e. House on Haunted Hill, Seventh Voyage of Sindad, etc., but it was always a double bill and included Movietone News. The best bill was when they had a matinee of “25 Color Cartoons, and a Two-Reel Three Stooges Comedy!”

Riccoban, I am retracing my family roots and have found out that my grandparents, my mom and her 2 brothers lived at 1730 Broadway according to the 1940 census. My Grandparents were Nora ( francis ) and Robert Evans. They’re children were Robert Jr., My mom Marilyn and John. I know they were still there in 1951 do these name ring any bells ? if so can you reach out to me @ Thank You ! John Williams.

Here is the only photo I have ever seen of the Colonial with it’s vertical sign and marquee still in place:

@ Bway, Photo added to Gallery, I didn’t see that you’d posted already here. Aren’t those pics from the archives great?