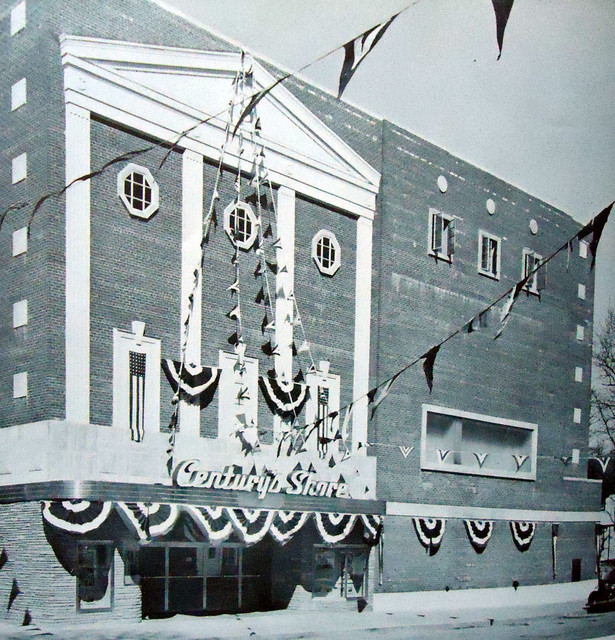 The Shore Theatre was opened by Century Theaters on April 8, 1950. It had a Colonial style exterior, but the auditorium was in a Moderne style. Seating was provided in orchestra & balcony levels. The stepped ceiling contained concealed lighting.

At the time Century announced it would build the Shore it also indicated it would build a 1,000 seat theater in Huntington Station, in addition to the one which was already there. It was felt that, the way the area was developing, it could sustain two theaters in the village and two in the “Station”. The second theater in the Station was never built and, when the neighborhood went down the Station was closed. Century did, however, subsequently open two theaters in what was technically Huntington Station: the York in the Big H Shopping Center and the Whitman at the Walt Whitman Mall.

Looking at the photo section I see the image of the Shore when it opened. There was a narrow marquee but no sign boards. Latter in it’s life a huge signboard was affixed to the front of the building. You could read it a block over, New York Av, which was the main drag. Probably the intent. Would like to see a photo with that.

I saw “American Graffiti in the Shore 1,snuck into the Shore 2 to see "The Seven-ups”.Shame on me!

Please update, Cineplex Odeon closed it to convert into 8 screens

ridethetrain-Cineplex levelled the building and built an entirely new structure on the site. See it on CT as Shore 8. That theater took a long time to build because the company had financial trouble. The internal construction was visible for months before they resumed work.

Please update, theatre closed in the fall of 1996 to be replace by the Shore 8. Add previous operators RKO Century Warner and Cineplex Odeon

ridethectrain - RKO Century Warner did not exist at the time this, the original Shore Theatre was in operation. The ads for that period of time (see the one on the Smithhaven Mall) specified Cineplex Odeon & RKO. When the new Shore was built that was also, initially, the case.

Remember RKO merge with Century in the around 1981, Cineplex Odeon bought the chain in 1986

Almi was in the mix for awhile too. Interestingly, way back when Loew’s wanted to buy Century, which wasn’t too surprising since the two had a history of exchanging theatres.