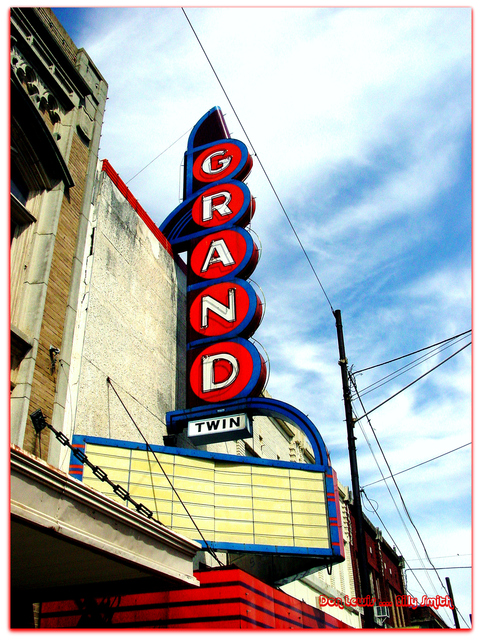 The Grand Theater was opened on September 23, 1937 with Edward Arnold in “The Toast of New York”. It was twinned on December 5, 1980. It is now closed but maintains a tall, unique and colorful vertical sign spelling “Grand” with large white letters in red circles and a blue back ground. The marquee is also intact. In August 2018 plans were proposed to refurbish and eventually reopen in the Grand Theater.

Here is an August 1979 article from the Paris News. Cineplex bought the Grand and announced plans to twin it.
http://tinyurl.com/okx6ju

On the Google maps photo the marquee says “Help me”. Depressing.

I hope the plans include ‘de-twinning’ and restoring to its original state and remove the stucco fake front. If not, expect no help from most area folks. Can’t understand why the sign was repaired and remounted to a crumbling facade that should have been removed. More of it fell onto sidewalk on 3/6/10. Two rules of thumb need to apply to restoring/repairing anything about this building.
(1) Do it correctly.
(2) Do it quickly.
If plans are to be half hearted then so will be donations & support. Such interest wains fast in this town.

From 1943 a photo taken in front of the Grand Theater in Paris. The man in the photo is almost certainly Claude Musselman. The unassuming Mr Musselman was a big player in the movie theater business.

Photos of the Grand Theater Here and Here from Paris TX.

Good news! Repairs will be proceeding. The Paris city council has unanimously agreed that this building must be repaired, and the exterior restored to how it looked in 1937!

In August 2018, the Paris City Council meeting unanimously voted to give the Paris Grand Theater Project a 30-year lease to revive the moribund theatre which would include the removal of asbestos among a number of other daunting challenges ahead.