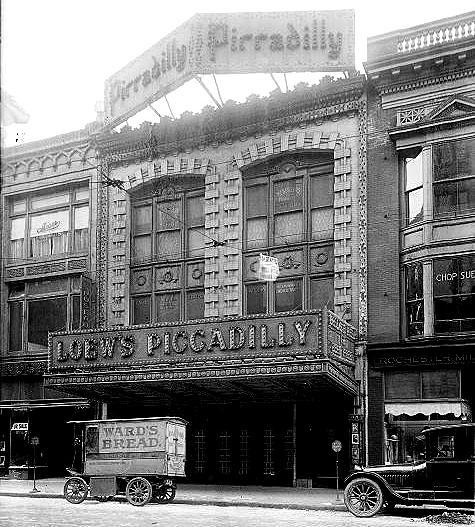 Opened November 25, 1916 as the Piccadilly Theatre. Probably the first large scale movie palace in this city. Opening day advertisements boasted of the theatre’s velvet carpeted rotunda, elegant fixtures comfortable seats, and the forest of potted palms around the orchestra pit. The Piccadilly’s orchestra shared the pit with one of Rochester’s earliest true “theatre” organs (as opposed to a church transplant). Pieces of the organ survive downstate, incorporated into an organ in Elmira, New York. It was operated by Loew’s Inc. in the 1920’s

On April 10, 1931 the Piccadilly Theatre became the Century Theatre, the name by which most older Rochesterians remember it. It was then part of the Comerford Theatres Inc. chain.

On March 3, 1948 it went through a final name change and became the Paramount Theatre and was remodelled to the plans of architect Michael J. DeAngelis. In August 1967, the Paramount’s main lobby was remodeled into a separate theatre, known as the Studio 2. Though it’s marquee carried the name “Studio 2”, the towering “Paramount” sign still dominated the Clinton Avenue facade. Patrons to the original auditorium now had to enter through the side entrance on Mortimer Street.

The 1970’s saw a period of decline and a steady stream of “blaxploitation” flicks. In a burst of short sightedness the theatre was finally closed on January 13, 1974 with Fred Williamson in “Hell Up in Harlem” and, after a few mild protests, it was demolished in the Fall of 1974. The most ironic thing about the Paramount/Piccadilly’s demolition is that the city is now attempting to construct a performing arts center on the exact same site!

I never entered the Paramount Theatre (my family almost always went to the Palace Theatre, across the street), but friends who did patronize it said that remnants of its original elegance lingered right up to the very end.

As I entered the Theatre I remember the Lobby being slightly like a hill. My first time there was to see Creature From The Black Lagoon in 3D Wow, hat an experience for a 12 yr old boy back then!!!

The Piccadilly was a Loew’s vaudeville theatre. I don’t know when the Martina gang (did I say that?) took it over but the place was very run down and somewhat unkempt. I saw Omega Man and a couple of others there.

Martina ran a bunch of old downtown theatres and were always in court suing the other chains for unfair booking practices. Thing was, Matina always seemed to get pretty good movies. All the Martinas became pretty run down in the late sixties and early seventies finally closing up in quick succession.

Here is a fresh link to the 1948 Boxoffice item with a photo of the Paramount’s remodeled lobby.

“The most ironic thing about the Paramount/Piccadilly’s demolition is that the city is now attempting to construct a performing arts center on the exact same site!”

In the late 40’s when the Century theatre was remodeled, it became 2 theatres. The Paramount theatre’s entrance was on Clinton Ave. North and Century theatre’s entrance on Mortimer St. I recall attending the grand opening of the Paramount theatre and seeing the first muscial film projected in Vista Vision. It’s clearity was impressive but not as wide screen as Cinemascope.

November 19th, 1916 grand opening ad as Piccadilly also in the photo section. It opened on the 25th.