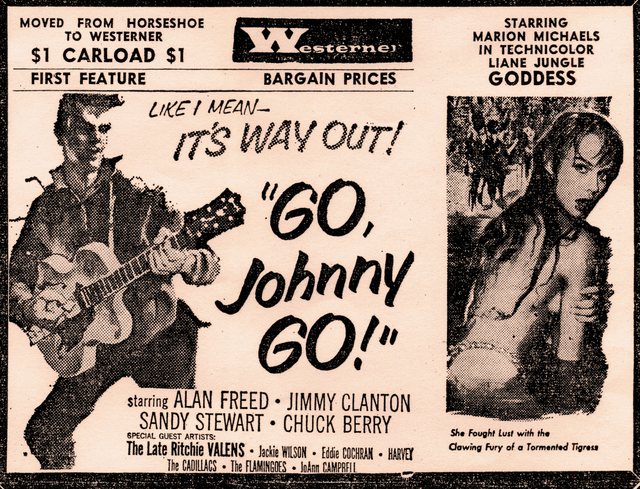 The Plains Drive-In opened June 5, 1948 with Rod Cameron in “Panhandle”. It was renamed Westerner Drive-In November 1, 1949. Like many other drive-ins, this one featured “adult films” in its last years and was renamed Fine Arts Drive-In from November 25, 1965. Surprisingly, there was a dirt road on one side of the theater that offered a pretty good view. You could always find several cars parked along it at night. (So I am told) It was closed in 1980 and demolished many years ago.

A theater ad from 1959 for the Westerner Drive In in Lubbock.

The site seems to be demarcated by Milwaukee, 19th, LaSalle and 22nd.

Opened with “Panhandle”. Front end is now Pennzoil Masterlube Express, and the back end is now houses.

Renaming and winterizing notes in a lengthy article from the Oct. 29, 1949 issue of BoxOffice:

LUBBOCK, TEX.—Extensive improvements have been completed for another winter of operation of the drive-in operated here by E. K. Lamb of Lubboclt and Doyle Garrett of Dallas.

Known as the Plains since its completion more than a year ago, the drive-in has been rechristened the Westerner. The name was chosen. Lam said, because it is appropriate and, specifically, as a salute to the football and other competitive teams representing Lubbock High school. The current high school football Westerners are the undefeated, untied favorites for the 1949 Texas championship.

RAMPS ARE PAVED – The most important improvement, Lamb said, was the paving of the ramps. Blueprinted for next spring is an extensive landscaping program which has necessitated drilling a well and installation of a distribution system for irrigation. The total program adds up to a cost estimated at more than $20,000.

All-winter operation will not be an experiment at the Westerner. Lamb and Garrett tried it last winter in the face of warnings that they were inviting bankruptcy. They played to good business throughout the season without missing a performance because of cold weather. The only time lost, aggregating about 20 days, resulted from ramps softened by one of the worst blizzards this area has seen in years.

Lamb expressed confidence that the new paving will be the answer to that problem. The two other operating drive-ins serving Lubbock plan to close around the middle of December. They are the Corral, one of the Llndsley Theatres, and the Five Points, a Preston E. Smith Enterprises house.

REOPEN TWO IN MARCH – Both said extensive improvements are planned before reopening in March. J. B. Rhea, Llndslev manager, said projected work at the Corral includes further development of elaborate lanscaping, on which considerable progress was made this year. By next year, expectations are the theatre will be given a park-like setting.

All the operators reported drive-in business this year improved over that of last year.

Smith estimated the increase at the Five Points for comparable periods since he acquired it in June 1948, at about 30 per cent. He spent more than $25,000 in improvements immediately after taking possession.

Another view of that renaming came the following week in the Nov. 5, issue. “LUBBOCK – The Lone Star Theatres, Inc., has changed the name of the Plains Drive-In here to the Westerner, to eliminate difficulties arising from the duplication of the name Plains. There is a Plains Theatre here, owned by P. E. Smith and the names have caused considerable confusion among bookers, shippers and cashiers.”

Motion Picture Exhibitor, March 14, 1962: “W. O. Bearden has closed the Chief, Lubbock, Tex., which he has owned and operated for 23 years. He stated that he should have closed the theatre long before but had kept it open for sentimental reasons. Beardon also operates the Arcadia, indoors, and the Red Raider, Westerner, and Golden Horseshoe drive-ins, Lubbock, plus holdings in Amarillo, Tex., and Clivis (sic), N.M.”

Amazingly enough, there is still a slight imprint of the front part of the drive-in located behind the Master Lube business.