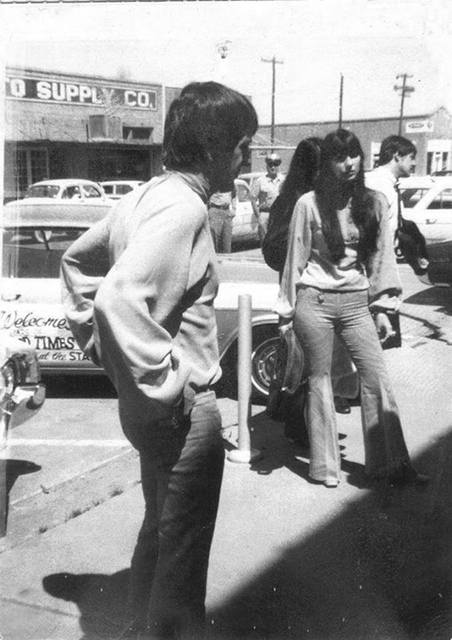 The single screen Plaza Theatre was built by Texas Consolidated Theatres Inc. in 1953, over the ruins of the Vernon Opera House. The theatre faces the courthouse. It had a seating capacity for 1,204, all on a single floor. There was a cry room at the rear of the auditorium which seated 12 patrons. The Plaza Theatre was equipped for CinemaScope films and stereophonic sound.

The façade is interesting, with a short tower on the left in orange brick. The street level has a very unattractive mosaic pattern, but the marquee is very nice, and still has glass panels in the attractions boards. The ticket booth has no glass, and someone has placed a potted plant on the counter. The theatre was later twinned.

The Plaza Theatre was re-opened by the current operators in March 2007.

The Plaza Theatre was built in 1953. A photo of the auditorium appeared in Boxoffice Magazine’s issue of July 7, 1956, as part of a feature about wide screens. The caption included the line: “The Plaza, erected in 1953, is said to be the first new theatre especially designed for widescreen and stereosound.”

A March 12, 1949, Boxoffice item about the opening of the El Rancho Drive-In had information about other theaters in Vernon. There were four indoor houses in operation then, these being the 350-seat Majestic and the 400-seat Mecca, both operated by Cortez Hamm, and the 1000-seat Vernon and 500-seat Pic, operated by Interstate Theatres. A second drive-in was already under construction as well.

A 1941 Boxoffice item mentions a Pictorium Theatre at Vernon. That was probably the Pic’s earlier name.

The February 28, 1977, issue of Boxoffice reported that Mr. and Mrs. James G. Barton had bought the Plaza Theatre and had “…plans to split the 1,100-seat theatre from front to back into two 30-foot auditoriums within the next several months.”

There is a HealthMart Pharmacy commercial currently running (3\3\2010) that has a nice view of the front of this theater. Saw the ad on General Hospital.

The theatre is shown in a national pharmaceutical commercial set in Vernon, TX along with other parts of town.

From 1986 a photograph of the Plaza Theater in Vernon.

The Pictorium Theatre in Vernon, Wilbarger County, Texas is not the same as the theater pictured above.

The Pictorium Theatre was located on Pease Street between F. W. Woolworth and the Herring National Bank. One of my 3rd Great Grand-Uncles was the doorman for the Pictorium in 1933.

The Vernon Theater was located on Main Street and was formerly known at the More Theater. It was located between the Municipal Building and the Pendleton Music Store in 1917.

Photographs of both of these theatres as they existed in their time can be seen in the book Vernon, by Preston Cary.

I submitted a CT page for the Vernon Theater based on VernonTexasHistory’s above description. I have located 2 photo’s from 1944 & 1945, which I will add after the page is accepted by the CT Admins. I will post the link to that page here as well.

Here is the new page for the Vernon Theater. They need to update about the 1952 fire.