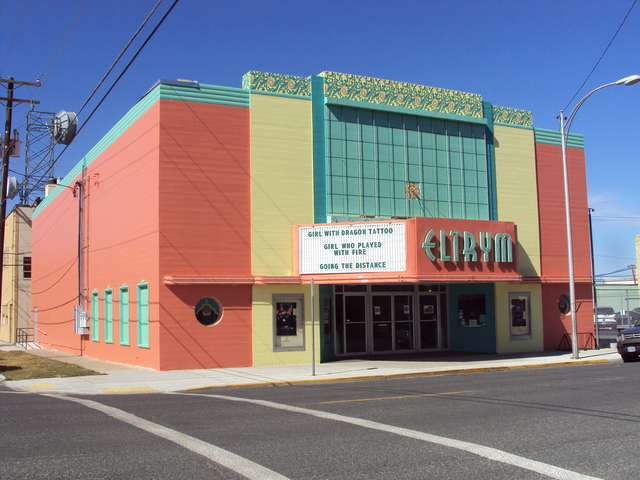 Opened in June 1940 as a single screen 700 seat capacity movie house, it was renovated in 1997 and converted into a triplex with stadium style seating.

Here is the latest on the closure, hot off the presses (or at least lukewarm):
http://tinyurl.com/zdvot

This is from August 11:
http://tinyurl.com/m9yzy

The Eltrym theater is set to re-open on May 4th, 2007. An agreement was reached to install fire-resistant doors (instead of sprinklers).

Perhaps function should be first-run movies as opposed to movies, no description.

Style should be Pepto-Bismol.

The Eltrym Theater opened on June 27th, 1940 and had 700 seats. The first film shown was “Ghost Breakers” starring Bob Hope and Paulette Goddard. The theater was built by Frank Buckmiller and Freeman Geddes and was named in honor of Frank’s wife, Myrtle, who passed away before the theater was finished. The architect was Day Walter Hillborn from Vancouver, WA.

There’s a recent photo here among other photos of Baker City, second one down: http://www.lottaliving.com/bb/viewtopic.php?t=17711

The Eltrym Theatre is in the process of installing digital projection units in all of its theatres. This big investment will ensure the viability of the theatre for years to come. I applaud the owners for investing in our community like this. They have done so much to the Eltrym since purchasing it. It has truly become a shining jewel in our downtown historic district.