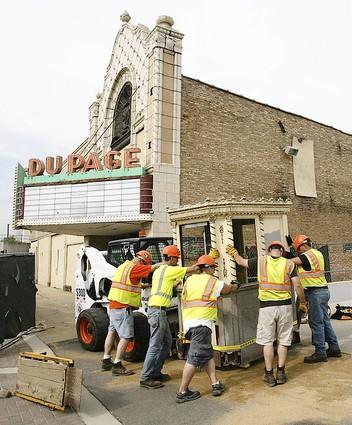 Opened on July 28, 1928, the DuPage Theater was the creation of the Midwest Paramount Theatre Corporation. This movie palace was designed by R.G. Wolff, who was associated with the Chicago architecture firm of Rapp and Rapp, which is recognized as the foremost theater architectural firm in American history.

The DuPage Theater was one of the rare Atmospheric style theaters first conceived by famed architect John Eberson. Using a combination of architectual features and special lighting effects, the theatergoer was transported to an outdoor Spanish garden setting with twinkling stars covering a lovely patio. In theaters like the DuPage, the building and its special lighting effects were as much a part of the show as the entertainment presented onscreen and onstage.

The DuPage Theater played host to all the great classic films, as well as featured live entertainers such as Gene Autry, Pat Butram and George Gobel. It was also a favorite location for live radio broadcasts of such popular shows as the National Barn Dance.

In May of 2007, after years of controversy and struggle, the battle was lost by its supporters for keeping the DuPage Theater from the wrecking crew, and was torn down to make way for future development of the site.

I think HDTV would like to read about how other preservationists can avoid the same fate as the Lombard group did. If you would like to know what happened, got to www.lombardvillagevoice and click on message boards.

For the benefit of those of us who aren’t in the loop: what has transpired?

Duper Dude,
What is your next move? There is a guy trying to tear down his treehouse on Maple Street. It has been there for years. Can you stop him.

Here is a slideshow of various interior shots – http://youtu.be/BFkpeGFqDpY

If you are the original owner of these photos please let me know; can’t even remember where I found these online.

I set them to the music of Irenee Berge, a silent film composer from the early 1900s. This version is as it would have been played by a theatre orchestra in one of the bigger movie palaces that could afford an orchestra.

It’s too bad that something better couldn’t have happened here. To my knowledge the property is still a grass lot. But at least there is some measure of peace in the community now.

I remember going there on Saturday afternoons with free tickets we got from the Hobby Hub next door. Those were the days when a kid could leave home and walk downtown without having their parents worrying about them or setting up a “play date”.

Does anyone have more info about the Hub Hobbies that was located in the DuPage Theater that was in Lombard, IL. If you do I am very interested to learn more about it.

Save `The Dupe' … … and save those memories of Main Street

Remember the scary sword fight between Sinbad the Sailor and the skeleton man? Or Sinbad’s face-off with the cyclops on the island of Colossa, where he had to go to break the spell cast over his beloved princess Parisa, who had been reduced to the size of a pocket knife by the evil sorcerer Sokurah?

I didn’t think so. Neither did I before I tweaked my memory on the Internet. What I do remember, like it was yesterday, is that sweet feeling of independence, walking down Main Street, Lombard, with my 12-year-old buddies, chores finished, fancy-free on a Saturday afternoon, off to see “The 7th Voyage of Sinbad” at the DuPage Theatre.

As always, the 1959 action movie was only part of the show at “The Dupe.” Some of my older classmates had begun to hang out with (groan) girls, so first we’d cruise the balcony to see who was necking with whom. Next we’d go down to the long, glassy candy counter for an obligatory box of Milk Duds, maybe even a roll of caramel bull’s-eyes—if the lawn-mowing money held up. Then it was time to settle into the red velour seats, under a fake black sky with twinkling stars, and trip away with Sinbad, or Hercules or Jason and the Argonauts. Loved those sandal flicks.

Ah, The Dupe. Say it ain’t so. Say they’re not going to tear her down.

They can’t tear her down. Not after more than a decade of civic efforts to save her. Not after those efforts secured charitable contributions, plus federal and state pledges, worth $5.5 million. Not after one of the nation’s top restoration architects—Daniel P. Coffey, the guy who helped restore the Chicago and the Oriental and the Palace theaters in the North Loop—has drawn up a sensational plan, not just to save the old theater as a performing arts center, but to infuse Lombard’s anemic downtown with a $30 million wrap-around development of luxury condos and lively storefronts.

Most curious of all, how can they knock down The Dupe when powerful DuPage County politicians are pleading with the Lombard Village Board to give preservation one last chance? U.S. Rep. Henry Hyde (R-Ill.), state Sen. Dan Cronin (R-Elmhurst) and former Illinois Senate President James “Pate” Philip (R-Wood Dale)—none previously known as gargoyle-hugging preservationists—are urging the Village Board to reconsider its June vote authorizing demolition.

In some ways you can’t blame the Village Board for losing patience with the project. Ten years ago the volunteer Friends of the DuPage Theatre said a developer was lined up to convert the building into offices and a studio for making educational videos. When that deal fell through the village took title to the 77-year-old theater and its attached offices and storefronts. In 2001 the board appointed a blue-ribbon committee to come up with a plan, but it was slow going.

Seems the “new urbanism” that has inspired towns like Elmhurst, Downers Grove and Arlington Heights to rejuvenate downtowns around restored train stations and theaters has been, well, slow to catch on in the lilac village. It’s still tough to compete there with the big-box discounters on Roosevelt Road and the 18-screen cinema at the Yorktown mall. And public-private partnerships of the kind needed to save The Dupe remain a tough sell politically. It’s still a tax-a-phobic town, even if the John Birch Society long ago closed its anti-communist “library” off St. Charles Road.

Still, there was excitement earlier this year with the unveiling of Coffey’s plan for preservation and redevelopment. His client, developer Richard Curto of RSC & Associates, would restore the theater’s “Spanish courtyard” interior a la the 1928 design by Rapp & Rapp, including those twinkling stars of my youth. In the parking lot south of the theater would rise a five-story condo-over-stores structure of compatible design (this sentence as published has been corrected in this text). Behind the stores, out of sight under the condos, would be two levels of parking for 237 cars, including spaces set aside on weekdays for commuters using the Metra station across the street.

In short, the project would catapult Lombard into the forefront of new urbanism and transit-oriented design. Who knows, the town might even snag a Starbucks. Best of all, contends Coffey, the property and sales taxes from the development, plus the state and federal grants already pledged, would cover the $8.5 million cost of restoring the theater.

But it may not happen. There is bad blood between preservationists and certain members of the Village Board. Deadlines have been missed. Harsh words have been exchanged in public. Other condo developers likely are standing by to pay Lombard serious money for the site—so long as they don’t have to save the theater. Why take a chance on preservation?

“It seems to have come down to plain old personality problems,” said Coffey.

That may be. But for this son of Lombard, this long-ago marcher in the Lilac Parade, it’s also about memories. And the faint hope that some Saturday afternoon in the not too distant future, a 12-year-old and his buddies will be able to walk, not ride, down Main Street, buy some Milk Duds and slip into another world—to the island of Colossa, perhaps—under the stars at the good old Dupe.