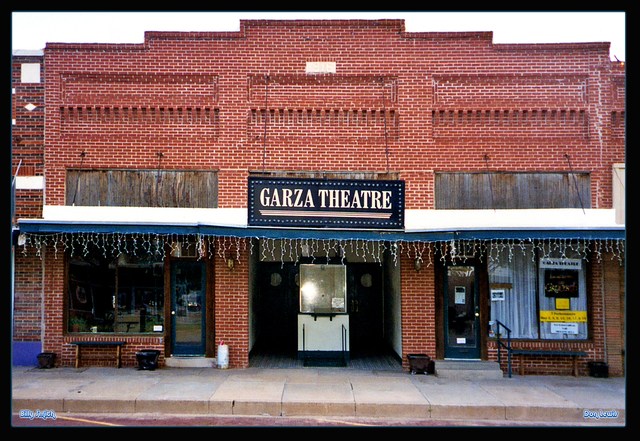 This small theater was boarded up and hidden away for many years. It was uncovered and partially renovated for live plays. It had a very successful run for several years thanks to the very talented Jane Prince Jones of KLLL radio and Prince-Jones Travel in Lubbock.

The town’s web site says that the Garza was previously called the Palace Theatre. It also says that it was renamed the Garza when renovated as a live venue in 1986, but Boxoffice mentions the Garza Theatre in Post at least as early as 1943.

The earliest mention of the Palace I’ve found in the trades is in Motion Picture Times of August 25, 1928, though the house apparently opened in 1916.

Boxoffice of March 26, 1936, said that the Palace at Post had been taken over by the Griffith circuit. By 1943 the Garza Theatre at Post is mentioned as being operated by Westex Theatres, a Griffith subsidiary.

I can’t find the name Palace mentioned after 1936, nor anything about any other theaters operating at Post before the Garza is mentioned in 1943, so the renaming must have taken place between those years.

The town’s web site says that the theater closed as a movie house in 1955, and was then boarded up for almost three decades after being damaged by a fire in 1957.

The Garza theater has been closed by the City of Post. They say the theater building is structural unsafe. Don’t know if it will reopen due to the cost of repair. Please change the Garza to closed.