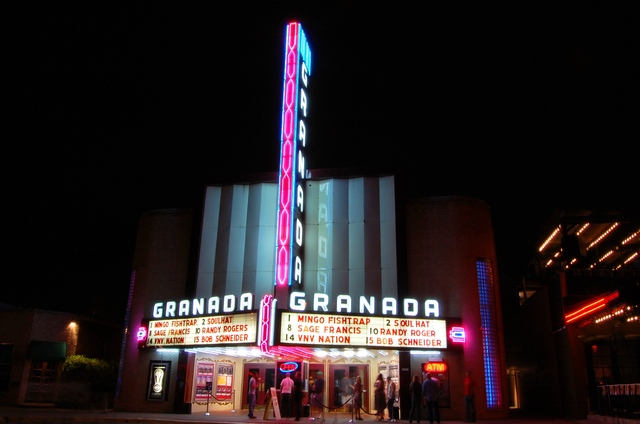 The Granada Theater was opened by Phil Isley Enterprises on January 16, 1946. The opening movie was “Mildred Pierce” starring Joan Crawford. It has been well preserved and features a huge and towering vertical “Granada” sign. It now functions as a popular concert venue.

In the 1960s, this was run as a prestige house by UA Theaters. “Far From the Madding Crowd”, “Funny Girl” and “The Producers” all played their exclusive first-run engagements here. From time to time, films played day-dated with the Vogue Theater in Oak Cliff.

A photo of the Granada Theatre was featured in an ad for Texlite porcelain enamel products appearing in the March 2, 1946, issue of Boxoffice Magazine. The ad named the architect of the Granada as Raymond F. Smith.

Had it not been for this theater in the 70’s, I would never have been able to see some of the great classics of Hollywood’s golden age in new 35mm prints – wonderful management, great sound and projection. Video, of course, killed off the market for revival houses, but the upside is I now own most of those films! Oh, well, at least the building survives. I wish it well.

A night shot I took of the Granada back in 2007. A Beautiful Theatre! night photo .. Enjoy.. RAC Photography

Chuck1231.. Thank You! Appreciate the compliment..

Lived in Dallas in 1978-79 and I was introduced to Foreign films and other movies such as Clockwork Orange. One of the Movie Gems. Go to see the Granada still open.

Phil Isley Enterprises opened the Granada Theater, its first in the Dallas market and eighth overall on January 16, 1946 with “Mildred Pierce”. Post-War Dallas saw the rise of new suburban movie theaters which would pressure some of the second-run theaters on downtown Dallas' theater row. The Raymond F. Smith architected theater had 950 seats and a tower with changing neon lights. Isley would soon take on the Rita Theater in East Dallas for its second theater. The Granada was community-minded with benefit screenings, church services, early children’s matinees with yo-yo contests, and some local-interest film choices. It had a thin sliver of the population with the Arcadia to the south, the Gay turned Coronet to the west and joined in October of 1946 by the nearby Wilshire Theater. But Isley was up to the task running a consistent and neighborhood-centered operation.

Almost twenty years into Isley’s operation, he sold the Granada and 12 other theaters in his portfolio to John H. Rowley for $1.5 million. Rowley had just sold out of his Rowley United as that circuit would operate as the southwest region of United Artists (UA). The Granada would be the first group in Rowley’s newly-christened and short-lived Big Tex Theaters before being subsumed by United Artists. Under UA opeation, the Granada lost its way as a number of theaters on the periphery of the Central Zone in Dallas struggled.

Within the C-Zone, newer theaters like the UA Ciné, Medallion, and Northpark I & II got the new films. Veteran Highland Park’s Village got the family films and the Wilshire did great with road shows and first-run bookings. The Arcadia, Coronet, Knox St., Lakewood and Granada flailed to stay relevant just outside of the C-Zone. Pitched as an occasional under-carrier completing UA Ciné roadshow runs including “Far From the Madding Crowd” and “Funny Girl,” UA positioned the Granada as an arthouse and having a big hit with “The Producers.” The start was so good that UA switched names of the veteran Avenue Theater in East Dallas to the Guild Theater to rebrand there as art also.

Local shop owners weren’t too thrilled and the police raided theater during its very first week. A petition signed by 1,400 people tried to end the porn and picketers protested. The city put enough pressure on the theater – as well as the nearby adult operator, the Coronet Theater— including raids and daily fines to force a change. Guild Art would sub-sublease the theater to William Smart and a partner in late August 1975 who changed the theater back to a discount house. The first-time operators signed on with New American Cinema – which vacated the Festival Theater – and Zoo-FM, a local rock station which showed music-centric midnight shows during that period. The protests and raids had stopped but so had a viable flow of patrons. The Granada brand was tarnished and the sub-run $1 concept failed within five months. In March of 1976, the Guild came back playing adult films. The Guild left the building under scrutiny and UA subleased the theater to an operator who changed the theater to sub-run discount in November of 1976. Those operators reportedly walked away from the theater January 13, 1977 failing to make rent and UA locked up the property and the lease finally expired. UA left the property.

The next operators spent $50,0000 in the spring and summer of 1977 to convert the Granada to a live event space reducing to 600 seats. The theater opened with Kenny Rogers and soon featuring Muddy Waters with some other impressive acts booked. The venue failed quickly and some promised events at the end didn’t make it to the stage. The changes — including expanded stage — would serve the building well down the line but it was hard to convince lower Greenville residents saddened as the theater was vacant for the second time that year and a sixth-month period into 1978. It had a very uncertain future as theaters including the Esquire and the nearby Wilshire were among the single screen post-War suburban theaters in Dallas being demolished.

But operator Movie Inc. out of New Mexico took on the other neighborhood, former-art-turned-porn-theater in the Coronet creating an oft sold out repertory and cult film establishment. Having just 309 seats, Movie Inc. needed a bigger place so the Edison moved to the Granada Theater on April 20, 1978. The Granada held twice as many people and was more of a nightspot for the target audience. The Edison ran for about a year but with home video coming into vogue, that market was challenging and the Edison ended. A new operator came in who tried eclectic fare and another operator tried an Edison-like movie club concept with 20 repertory films for $25. That didn’t work. In February of 1984, Bill Neal ran the theater running repertory. His last screening was on Oct. 31, 1986 with “The Tingler.” The neighborhood turned out in force with “Save the Granada” signs and a petition with 2,000 signatures opposing the theater’s closing. Times had changed in ten years when picketers tried to close the then-adult house.

The next operator was Keith McKeague and John Appleton of Great Concepts who residents told to not create “another” restaurant, nightclub or bar in the Granada. They launched the Granada Cinema ‘n’ Drafthouse with beer as an option while watching second-run movies. Replacing the old rows of seats with dining tables though decreasing the house to 400 seats proved to be a winner. In 1992, Brian Schultz took on the Granada forming Granada Entertainment. In 1997, the Granada reported $2 million in revenue. They parlayed that into the purchase and redesign of a second location, the former UA Prestonwood Creek on Belt Line Road which would have a full kitchen and play first-run films. In 1999, the original Granada changed to first-run films. With competition due from the new Angelika, the Granada closed at the end of March 2001. Schultz’s fledgling Granada Entertainment circuit would soon become the dynamic, multi-state Studio Movie Grill circuit that blossomed in the early 21st Century.

In early 2002, new operators refurbished the Granada taking it back to live concerts including Bob Dylan, Dolly Parton, Steve Winwood, and Peter Tork of the Monkees. And the theater had football viewing, Oscars parties and even brought cinema classics back showing on the rooftop. As the theater was approaching its 70th anniversary, it was just as vibrant an entertainment spot deftly intertwined with its neighborhood as when it had opened. The Granada proved to be quite the survivor in Dallas’ entertainment history.

At one point this theater had stopped showing first runs and became a retro-house with a monthly calendar and different movies each week. Saw many “Bond”, “Godzilla”, and other such marathons (usually sitting in the balcony). Very happy to see it’s still open.

The next operator was Keith McKeague and John Appleton of Great Concepts were associated with Cinema ‘n’ Drafthouse Circuit which became Cinema Grill Systems Circuit of Atlanta in the late 1980s until Brian Shultz took it on in 1992.