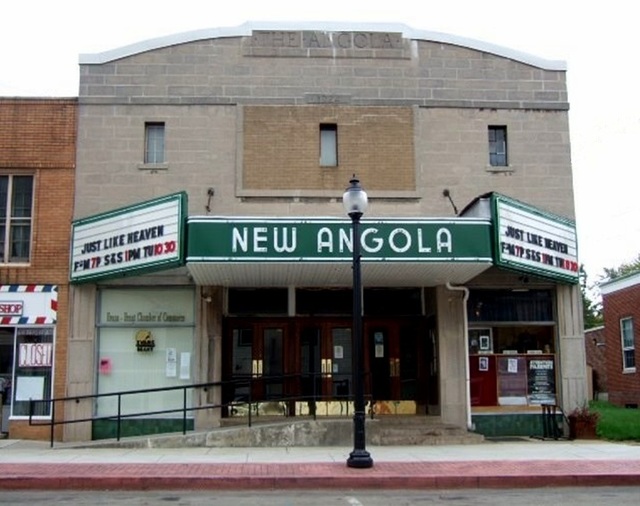 The New Angola Theatre’s coved neon lighting is reminiscent of several other Western New York theatres. The theatre’s seats have been beautifully recovered in grey velvet. The washrooms were completely redone and enlarged. Lots of wood trim has been added along with new but appropriate wall sconces. New exterior wall sound curtains have been added, but not everywhere so much of the theatre’s original charm is still visible. The screen’s original curtains and draping has been preserved.

Seating is down to 393 from the original 509. I believe the theatre is open Friday through Tuesday with one show per day. The theatre is now run by a non-profit group.

The New Angola Theatre’s extensive and costly renovations have created a comfortable, eye appealing theatre – it’s a great place to see a movie. It had closed by December 2021 and the building was put up ‘For Sale’.

I’ve been to this theatre, but only in the lobby…will check it out this summer!

LOL! No! We were with friends and they were kind enough to drive by and let me go inside to say hello to the kids behind the counter and tell them they are lucky to have this theatre in their hometown. Not sure if they appreciated what I was telling them, but maybe they will….someday!

And since a movie was in progress I wasn’t able to see the auditorium design with the house lights up, but will this summer when I head to the Hamburg Fair entitled “Love a Fair” this year.

OK…will do! And speaking of photos when will the add a photo feature be reinstalled on CT? I and a former manager would like to see a photo added of our hometown theatre, the Grand/Westfield NY.

I simply vote for the name Angola Theatre!

Thanks for the photos, Chuck and good to see you on CT in 2011. Aloha?

In 1930, the architect of this theater, George E. Eichenlaub, wrote some articles about theater design and construction for Motion Picture Times. Eichenlaub called his projects “Standard Theaters.”

The article in the January 14 issue focused on an unnamed 500-seat theater in a small town some 18 miles from a major city, which fits Angola’s relationship to Buffalo. There is a drawing of the theater’s facade, which looks virtually identical to the 1985 American Classic Images photo of the Angola.

As the article never gives the theater’s name, and the design was intended to be somewhat generic, we can’t be sure that the theater described and pictured is the Angola, but there’s a good possibility that it is.

It’s also possible that there are other theaters built along the same lines scattered about the region, and some larger theaters designed along the lines of the 750-seat house described in Eichenlaub’s article in the February 11, 1930 issue of Motion Picture Times.

The link above deals with the death of the former owner.

Sorry to hear that is closed and up for sale.