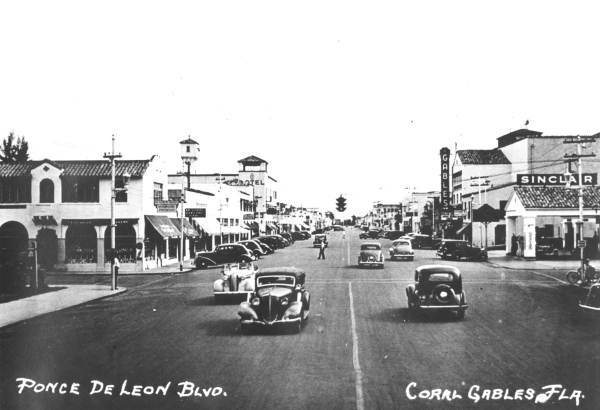 Located at Ponce de Leon Boulevard at Avenue Alcazar. The Coral Gables Theatre (not to be confused with the Twin Gables Theatre on Coral Way) was a large theatre. It opened on June 3, 1926 with Douglas MacLean in “That’s My Baby” and Hal Roach’s Rascals in “Uncle Tom’s Cabin” plus Max Fisher and his Band of Syncopators on stage. It was equipped with a Kimball organ which was opened by New York City based organist Edward J. Weaver. It was operated by Paramount Enterprises Inc. In 1932 it was renamed Gables Theatre. It was closed in 1981 and had been demolished by 1982.

And I saw “Wait Until Dark” there! I remember the entire audience jumping out of their seats during the scariest part.

This photo would imply that the Coral Gables Theatre (Famous players/Lasky 1500 seats)open in 1926 indeed became the Gables in 1936.

The Gables was a large house with balcony and a very large screen,
especially after the introduction of CinemaScope in the early ‘50s.
Unfortunately, the 1936 “renovation” took out almost all of the original decor from the lobby and auditorium. What I remember was a
creme colored wall with a medium blue design on each wall in a sort of stepped effect starting at the rear…nothing great. Proscenium was plain, ceiling plain. Entry doors into the auditorium were sort of greyish blue as I remember with an octogan shaped frosted window in the center upper part. The exterior underwent some significant changes after the 1936 renovation. I remember the Gables from about 1947 to 1972. The large vertical sign was plaster at the end of the theatre’s life, but earlier in my time it had mirror chips on the plaster on both sides of it, making the neon letters “GABLES” really glow at night. It seemed to get plainer as time went on.

I saw many classic films here during my years in the Gables. I took my much younger brother to see “Woodstock” here when there was a
tizzy about it showing in Coral Gables. An earlier post said that “Woodstock” played at the Coral? No, it was at the Gables.

I miss all the old theatres in the Gables; so glad that the Miracle Theatre survived…where I was an usher in my teens.

The long run of “WOODSTOCK” opened at the smaller Coral which was used for exclusive runs. The Gables ran the film later when it went wide.

I grew up in the Gables, near this theater. When I was thirteen I got permission to go with my friends (all of us attended 7th grade at Carver in Coconut Grove) to see a new exciting movie called ‘Star Wars’ in 1976. We were mesmerized, and had seen nothing like it before! One friend went back SIX times to see it! Also others such as murder-mystery ‘W’ (oooh, we were so scared!). I remember stopping at the popcorn counter and signs everywhere showed a big ‘W’ and the captions read ‘WHO is W’???? (as in, who is W, the murderer.) Also, ‘Earthquake’ with Charlton Heston & Lorne Greene, and many many more. It was a great home-town theater with a big screen and great sound, and like BerkelyBernie’s blog above this theater was just near Coral Gables Elementary School (which I attended from grade 1-6 (minus second grade when they forced us to leave Gables Elementary for ‘integration’, then they allowed us to come back the following year). Anyway, it was a great theater which I truly miss. I remember due to the population at the time, it was never really busy, just us neighborhood people mostly. And most people walked there from their homes or apartments. If memory serves me correctly, they eventually tore this building down and erected a tall modern building that read ‘Bank of Tokyo’ for many years. We were SO disheartened and not happy at all with the new addition to our beautiful town. Anyway, very happy memories at the Gables Theater. (As well as at Miracle on Miracle Mile, but Gables was MY theater.)

OK, the postcard above, was photographed at Ponce & Minorca, looking south. It’s easy to check via Google Streetview. So, yes, the theater was gone by the time I returned to Miami in 1982. Diagonally across the street, is the Hotel St. Michel (don’t know what it was back in the 30s), where I shot a student film in the early 80s. I would have remembered the old Gables sitting there. Occupying the spot now, is Wachovia – formerly whatever. I guess that the building was constructed right after they tore down the theater in 1981? Strange thing is, that as a kid in Miami from ‘67 – '74, I never attended a movie there.

Ripshin, that’s not so strange. I hardly went to the Gables as a kid either. The family films played mostly at the Coral and Miracle and later at the Twin Gables during that period. The Gables was not booked for kids and it was easier to get into an R rated film downtown.

Yes, I went to those three, often, during that time. However, I was a pretty observant kid, and I’m just surprised that I never noticed the building back then. I think that the old S&H Green Stamps store was just up the block, and we frequented that spot often. In the 80s, I lived a few blocks away, and it was definitely gone. I did watch them tear down the Coral – very sad. 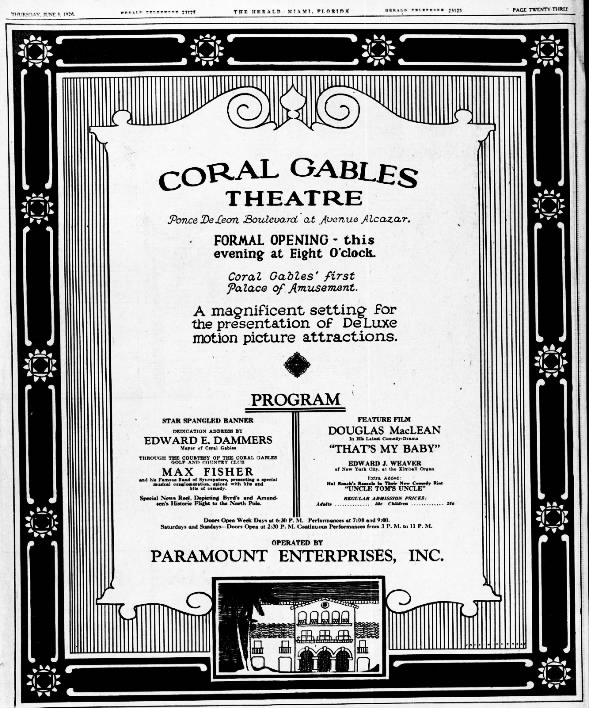