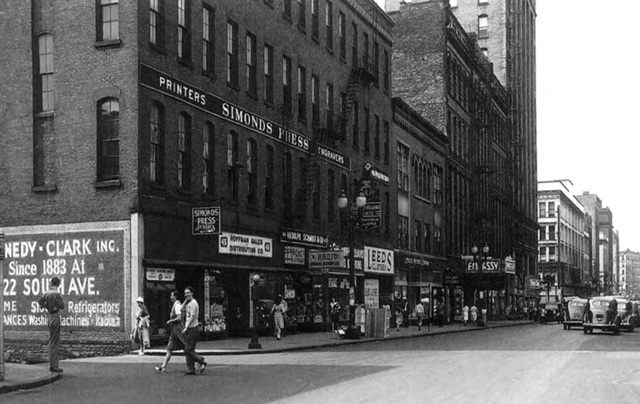 A theatre had existed on this South Avenue site since the 1860’s. The first theatre built on this spot was destroyed by fire in the 1890’s and replaced with a new theatre by the name of the Cook Opera House which opened January 14, 1892 with “Pinafore” . Under this name it hosted such stars as Buffalo Bill and Sarah Bernhardt.

The interior was a fairly elaborate late-Victorian opera house with two horseshoe shaped balconies. The five story facade was topped with a frieze spelling out the theatre’s name, underneath which was a row of terra cotta busts depicting characters from the opera “Faust”.

From October 12, 1912 it began playing aKeith Vaudeville and was renamed Family Theatre. By 1924 it was screening movies. I was the last holdout in Rochester to show silent movies when talkies were sweeping all before them and converted to talkies but closed in 1932. Taken over by E.M. Loew’s Theatres it reopened on January 8, 1937 the theatre became the Embassy Theatre, which was mainly known for its burlesque shows.

The theatre was closed in the 1952 and remained a well preserved, but shuttered, building until the 1980’s, when city began eyeing the site for a new convention center. While the convention center was being opposed by local citizens interested in restoring Cook’s Opera House and reopening, it a fire of “mysterious origin” swept through the structure and destroyed it on May 17, 1974, causing Rochester to lose it’s final 19th century theatre, remaining in near original condition.

The Embassy can be seen on the right in this 1947 photo from the Rochester Public Library:
http://tinyurl.com/6arc3k

As the “Cook Opera House”, this theater is listed under Rochester in the 1897-98 edition of the Julius Cahn Official Theatrical Guide. George Geiling was the Mgr and the seating capacity was 1,500. The theater had both gas and electric illumination. The proscenium opening was 33 feet wide X 26 feet high, and the stage was 51 feet deep. The theater was on the ground floor and there were 7 in the house orchestra. It’s also described as “Cook’s Opera House”. The other Rochester theater listed in this Guide is the Lyceum, wiith 1,698 seats. The 1897 population of Rochester was 160,000.

The architectural firm of Leon H. Lempert & Son designed the Cook Opera House. The firm was located in Rochester, and designed numerous theaters there. The other Rochester theaters they had designed, as listed in an ad for the firm in the 1905 editionof Julius Cahn’s Official Theatrical Guide, were the National, the Baker, the Lyceum, the Empire, and the Corinthian.

I guess it’s a little ridiculous to respond to a comment from 5 years ago, but charlesc is mistaken. The were not any actual plans in place to restore the theatre, just a group of citizens who were hoping to do so in spite of the city wanting to destroy the theatre. I remember in the same block was the Commerce Building, which was a lovely Beaux Arts skyscraper, and the old Security Trust Bank. Local citizens kicked up a fuss to save all the buildings, but with the fire at Cook’s Opera house the efforts to save them came to nothing. I was working at Lawyer’s Co-op at the time, and had been out of school for a few years, so the earliest the fire could have occured would have been 1979.

It seems suspicious that a theatre could sit vacant and untouched for decades, and then when the gov’t wants the site, it suddenly burns down.

Instead of something unique and local, Rochester now has the same ininspired type convention center so common to many cities. It just seems odd that with all the vacant land downtown, it couldn’t have gone somewhere else.

What with the loss of Sibley’s, the theatres on Clinton Avenue, Midtown Plaza, and dozens of other things, I don’t even go downtown when I go home to visit. Just the thought is too sickening.

Has anybody heard of the Colonial Theatre, at 197 Main St. East? I have a photograph of members of the Motion Picture Exhibitors League of America—New York State Ass'n No. 11. The photo may date to the late 1920’s. Attached to the photo is a paper which identifies the members and it appears the paper is a piece of writing paper with the Leagues' letterhead. It seems the League was based at the Colonial Theatre in Rochester.

TivFan: Your photo could date from as early as 1913, when the October 4 issue of Moving Picture World reported that the New York Motion Picture Exhibitors' League would meet in Rochester on October 15 and 16. A.N. Wolf of the Colonial Theatre was the local contact for details. The item does not give the address of the theater, though.

Mr. Wolf might have been connected with the League for many years, though, and could have been the local contact for many later conventions. There’s a brief article about the Colonial Theatre, with a photo of Mr. Wolf and a photo of the entrance to the theater itself on this page of the October 18, 1913, issue of the same publication. If Mr. Wolf is also in your photo, maybe you’ll recognize him.

TivFan: The Colonial was previously known as the Fairyland and subsequently as the Rialto, the name under which it is listed here on CT.

The Cook Opera House opened on January 14, 1892 with “Pinafore” live. In addition to opera and live stage plays, circuses and mostly vaudeville entertained locals. By 1909, the building was already considered passé and the offerings were moved to the nearby Temple Theatre. But the Opera House’s days were far from over.

On October 12, 1912, the Cook Opera House landed the Keith Vaudeville Circuit and changed its name to the Family Theatre likely with a 25-year lease. Under the leadership of the Fenyvessy Bros., the Family Theatre attracted top live acts.

By the early 1920s, films were a part of the vaudeville presentation at the Family. By the end of 1924, the Family Theatre had converted to full time film presentation. The Family would convert to sound. But by that time, the theatre was badly dated and appears ceased operations in 1932 ending Fas a ten cent sub-run theatre. As the lease lapsed in 1937, the Fenyvessy Bros. moved on and E.M. Loew of Boston was the next operator.

Reinforcing the building with steel and refurbishing took place, the Embassy Theatre launched on January 9, 1937 as a second-run house with “Earthworm Tractors” and “Rose Marie.” The theatre founds its audience with burlesque which ran there until 1952. A farewell performance with Rose la Rose occurred in 1952 and the Embassy appears to have closed despite promises to reopen.

The theatre was slated for demolition in 1959 but that was halted due to issues regarding the neighboring business. A small fire led to exterior changes to the theatre in 1962. A project called Canaltown looked to refurbish the theatre in 1973. But in the money raising period, the theatre was decimated by a May 17, 1974 fire ending the building’s tenure downtown.