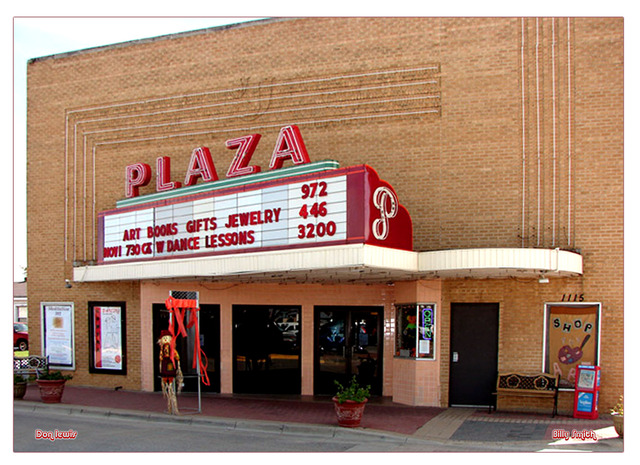 The Plaza Theatre replaced an earlier Plaza Theatre at a different address (it has its own page on Cinema Treasures). The new theatre is a beautifully preserved brick Moderne style theatre that is situated in Carrollton’s old downtown area. It opened December 15, 1949 with Cary Grant in “I Was a Male War Bride”. It operated continuously as a movie theatre for the next 43 years. It was designed by Raymond F. Smith and has an equally well preserved sign, with lots of neon and marquee. It is now operating as a successful art gallery.

I show the correct address for the Plaza Theatre as 1115 Fourth Avenue and not Street. A minor point but accuracy is important. I show the closing date of this theatre as December 31, 1994. The current owner is The Plaza Art Center.

During the time I was married and living near this theatre, it was a favorite place to go—whether taking my daughter to see a kids' show as she was growing up or just waiting to see something for more mature audiences with my ex-wife. We would deliberately put-off going to see first-run movies until they came to the “dollar”-movie houses (which the Plaza was at that time) just in case something that interested us might show there and we could once again partake of the “full-screen, one auditorium” experience that was even then becoming passe'. I remember the last feature shown there was “The Mask” in the early-90’s.

My image of the PLAZA
www.flickr.com/photos/lastpictureshow/287204680

In the 1930s, George Myers was everything to the, then, small town of Carrollton, Texas. The grocer/mayor/postmaster showed outdoor films before carving out a space in his downtown grocery store with post office to show indoor films at 1110 W. Main Street. The show-store was purchased by A.R. Lowery and his wife, Vera who replaced the benches with seating at the Plaza Theater. Their 8-year old son, John, made news when he made it to the final chapter of a western serial with a broken leg. Not long after A.R. Lowrey passed away, Vera and John, would decide to operate a larger theater, the “new” Plaza opening December 23, 1949 as the town had surged to just over 1,000 residents.

The Raymond Smith architected facility would prove to be well-built as the building was virtually unchanged over the next 45 years of operation. The original projector made it through the entire run of the building. Carrollton would grow from 1,000 residents to 93,000 in the 1990s. In a 55-year family theatrical career, the Lowery’s with their two Plaza Theaters would survive competition from the nearby twin-screen drive-in, the Rebel, as well as three multiplexes created in suburban Carrollton. Vera would continue working at the theater until age 92 and son, John, finally closed the theater – operating as a sub-run discount dollar house — with “The Mask” as the theater was reaching its 45th anniversary. The veteran operator sold the theater to a church-backed group who would convert the theater into a live performance venue.

A marker outside of the theater commemorates the Lowrey’s 45-year operation at the Plaza. Continuing in 1985 as the Plaza Music Theatre, the Grapevine Opry entertained locals until 2002. Two local businessmen took on the Plaza renaming it the Plaza Arts Center. It has space for local artists to display work regularly and hosted some events and local events. The Plaza has continued to the mid-2010s where the facility continues to entertain Carrollton in the city’s downtown looking almost unchanged after more than 65 years.

Correction: The Plaza Theatre opened on December 15, 1949 with Cary Grant in “I Was a Mail War Bride.”