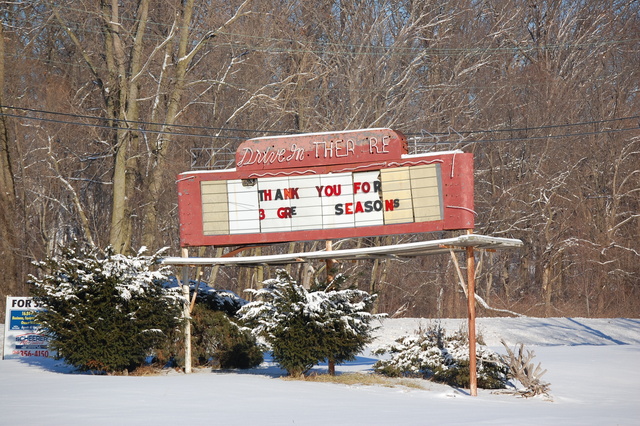 The Huntington Drive-In opened May 5, 1950, near Old Business Highway 24, with a single screen and space for 500 cars. The theater has a great old-fashioned marquee. In 2001, the Huntington Drive-In came under new ownership and was renovated, including a new roof on the concession building, repairs on the fence, and new playground equipment.

The drive-in’s season runs from April through September, shows first-run films, and features both classic in-car speakers as well as FM sound. Other features of the Huntington Drive-In include cartoons and classic intermission trailers, as well as being pet-friendly.

A second screen was added in 2012. It was closed on October 13, 2019. It was not allowed to open for the 2020 season due to the Covid-19 pandemic. Goodrich Quality Theatre went under and it was taken over by GQT Movies.

The drive-in now has two screens.

Apparently for sale according to the UDITOA site.

The Huntington Drive-In closed for a short time in 2005 when a storm damaged the screen, also they have made the conversion to digital projection.

Currently for sale according to their website (and they don’t take credit cards). …12 ACRES +/– COMMERCIAL. FOR INFO CONTACT ALAN UPDIKE @ 260-359-2472. SERIOUS INQUIRIES ONLY.

This appears to be owned by a company named Goodrich Quality Theaters. They own 31 theaters in Indiana, Illinois, Michigan, Missouri and 1 in Florida. This is the only drive-in they own. Digital projection on both screens, appears to be open Thursday, Friday, Saturday and Sunday. The last 3 are double features and on Thursday one screen shows a vintage movie while the other shows a current release, no double feature.

An April 2015 WANE news report (now on YouTube) apparently witnessed the official change in ownership, using title company pens. The report said that previous owners John Detzler and his unnamed wife (her name is Nellie!) bought the place “about 13 years ago”. The new owner was presented as Bob Goodrich of Goodrich Quality Theaters.

An article in The Journal Gazette the previous December noted that the Detzlers had a purchase agreement done for the Huntington Twin. “There are two major reasons: I’m 61 and my wife is 68, and we’ve tried to do most everything ourselves, including the long, late hours,” Detzler said. “Our primary plan, dream and goal has always been to relocate (to Colorado) permanently.” Happy retirement, you two!

The Huntington Drive In Theatre was established May 5th, 1950 and to the best of our knowledge has been in operation ever since. We, John and Anilda Detzler, took over the theatre in August 2001 with plans on improvements. Since then we have made many upgrades and hope to continue to do so with your strong support.

On March 31, 2005 a severe wind storm took down 2/3 of the screen tower. We decided to rebuild and started showing movies again by the Memorial Day Weekend. You can listen to the movie on our in car speakers or FM stereo radio.

Tons of great old photos here. Note that the second screen was built for the 2011 season. That lot was FM only.

Huntington Drive-In closed October 13, 2019 for the season. The theatre did not reopen the following spring because Goodrich Theatre Circuit closed the rest of its portfolio on March 16, 2020 followed by bankruptcy declaration and ceasing all operations.

The ozoner reopened under new management of GQT Movies Circuit on July 24, 2020 as the GQT Huntington Twin Drive-In. (Mason Asset Management and Namdar Realty Group purchased the bankrupt circuit with partner VIP Cinemas taking over operation of 22 former Goodrich Quality Theatre locations including the Oxford location. GQT Movies' home office is located in Kentwood, Michigan.) This entry should be listed as Formerly Operated by Goodrich Quality Theaters and Operated by GQT Movies.