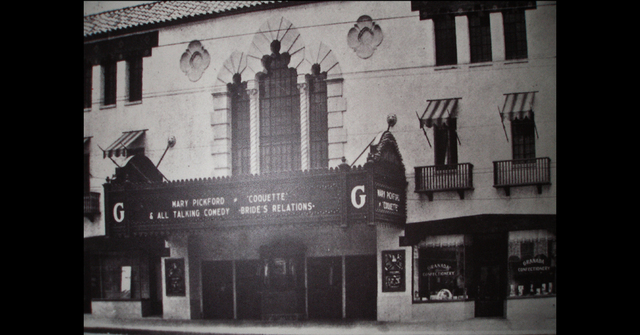 This Atmospheric style jewel’s exterior is decorated in Spanish Colonial architecture with large arch windows, spiraled columns and smaller windows each with a balcony and awning. The marquee was supported by two terra cotta lion heads. Stepping into the originally 1,217-seat auditorium transports the visitor to a Spanish open-air courtyard complete with statuary, fountains and torch like lighting. The proscenium resembles a bridge from one wall to the other. In its heyday artificial birds traveled on wires and projected clouds moved across the ceiling sky, lit in various hues and complete with tiny twinkling stars.

I remember on a childhood visit to this theatre in the 1980’s the Barton pipe organ that rose slowly from the floor in front of the stage, and the curtains rising to reveal all manner of instruments; bells, whistles and a large gong.

The theatre was open as a first-run house until it closed 1968. The Granada Theatre underwent a restoration in the 1980’s and operated as an art house theatre for a few years but soon closed. During its time as an art house, “The Last Temptation of Christ” played to sold out crowds as it was the only theatre in town to show this controversial film.

My Novemeber 10/07 image of the GRANADA.

The Wyandotte County Museum has several pictures of the Granada. The information is below if someone feels the urge.

Hey Butch Rigby, the description of your theater on cinematreasures says it is “closed” as of 3-7-2010.
Thought you might want to know.
Have a good one.

Good news: The Granada is open again. Now owned by Imagio Dei – Friends of Christianity, an ecumenical arts organization. They replaced the roof in May 2010 and as of November they are open and performances are being held. It is available to the community to host events of various types.

Also has a link to a page on the organ which was removed and dismantled several years ago. The KCPTO recently purchased the organ and had it trucked back to Kansas City where they plan to restore the organ and install it, but they haven’t secured a location for it yet.

Thanks to a grant from the Kansas Humanities Council there is a Granada Theatre website! Visit it and leave your comments, memories or photos. http://granadatheatrekck.com/

Granada has been a church since 2011- present Call “Casa de Dios para las Naciones,Inc.” it has been remodel and the Presence of God is very powerful.

Are there any pictures of the balcony lobby? There was a snack stand that was never open when I went there in the 1950’s. Also, pictures of the atmospheric ceiling? It was fascinating.