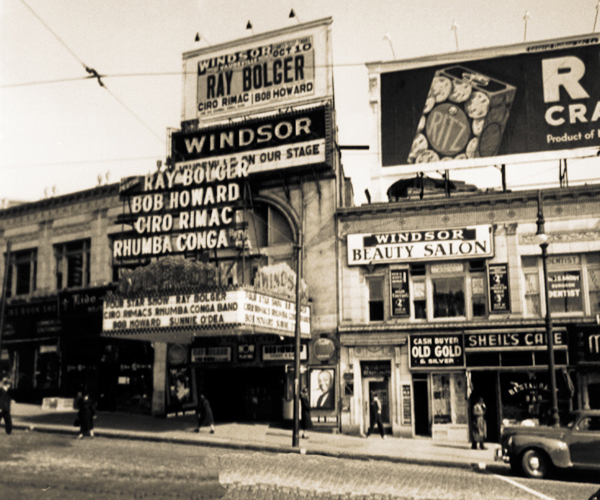 The Windsor Theatre opened around 1920 with 1,600 seats, located in the Fordham section of the Bronx on Kingsbridge Road near Fordham Road. Closed by the early-1950’s, the former theater now houses a restaurant on the ground floor and a nightclub upstairs. The main entrance has been redeveloped and in 2005 was in use by a law office.

Thanks, Mr. Harris. You’re doubtless right. I was a teenage “action” movie freak. The Windsor was doubtless far too sophisticated for my tastes, so I just blanked all memories of it. I often caught the Number 4 bus to go home at its stop just around the corner, at Fordham and Bainbridge, so I must have seen the Windsor countless times, but….

I’m interested in anyone who remembers the Lido Rivera restaurant next door to the theatre. I believe my grandfather may have been part owner.

Hi Lesthezuck- thanks for the kind comments about the Lido Rivera Restaurant. My father was one of the owners and my uncle was a waiter there. I’m wondering if you’re someone I would remember or vice versa. Who was your friend? I’d love to hear from you.

As I reported earlier, I remember the Lido vividly. I was just a post-Depression kid, many decades ago, but the Lido was my introduction to genuine “elegance”. Whenever the family wanted to do something really fancy, Grandma took us to the Lido — real tablecloths, great breadsticks, and more than enough suave to stun an incipient delinquent. For some reason, I remember the restaurant was shaped like an upside-down “L”. The best tables were in the back, away from Kingsbridge. We could not have gone more than a dozen times, but the Lido remains one of my fondest New York memories. It was a magnificent place!

Shortly after the Broadway production of “Arsenic and Old Lace” closed in 1944, it toured NYCâ€™s Subway Circuit theatres, including the Windsor Theatre in the Bronx. For my 12th birthday, the theatrical producer, Carol M. Sax, arranged for his secretary (my sister) to take me to see the comedy play at the Windsor. The play starred Josephine Hull, Jean Adair and Boris Karloff, the same cast that appeared in the Broadway production. Mr. Sax also arranged for me to go backstage after curtain and meet, his friend Josephine Hull. She was as sweet in person as she was in her role as Abby Brewster. She chatted with me for a while, introduced me to Jean Adair, and then gave me a goodbye kiss for my birthday. When the movie, starring Cary Grant, opened later that year at the Strand Theatre, I was thrilled to see Josephine Hull once again, this time on the big screen.

I grew up near Fordham Road and in the 1940s the Windsor was one the “subway circuit” theaters. I don’t recall the name of the play, but I remember the actress Kay Frances was appearing there.

The Google Map picture that now pops up in this post’s heading shows a stretch of Bainbridge Avenue, too far east of the Windsor to show any of the theater’s building. The posting needs a gizmo to allow a viewer to navigate around the block and fix the correct view. The Windsor’s façade still faces East Kingsbridge Road.

The Google Map picture has been corrected. Compare to the old picture linked in Lostmemory’s posting of July 2, 2008

Here is my final addition of theatres, I have no more…the Windsor was one of the great Bronx Theatres…large inside and had vaudeville, etc …in later years it showed three movies instead of a double feature…I was about 15 and went to one…and got home so late I thought my father was going to kill me…

Just this evening, I attended a show at the Historic Asolo Theater, here in Sarasota, where I now live…it was about the golden age of operetta and as we were leaving I said to my wife that the first operetta I ever saw was The New Moon by Sigmund Romberg at the Windsor Theater in The Bronx, near Poe Park…. Then I tried to remember the name of the show I saw there that starred Sam Levene, couldn’t think of it…. Thru the marvel of the Internet, I found this website and saw the comment by lesthezuck about LIght Up The sky, with Sam Levene…. Just wanted to say thanks, Les….glad to know that I wasn’t the only one who saw it….LOL….