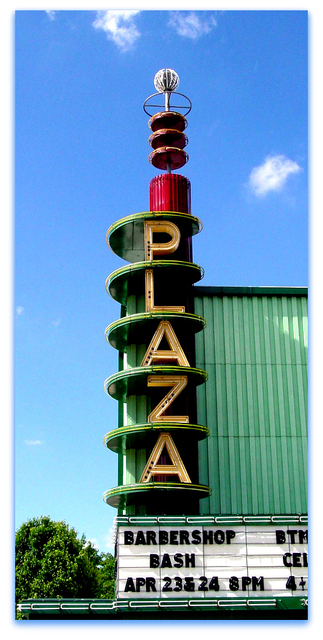 Since 1941 the Plaza Theatre has been a landmark and focal point for Garland. It has been completely refurbished to its original Art Deco style.

On its opening night April 4, 1941, it played its first feature presentation “Western Union” to a sold out theatre.

The Plaza Theatre was the third theatre built on the downtown square. On March 3, 1950 the current facade was redone and designed by Jack Grogan of Dallas, TX. In the 1950’s with television taking its toll the theatre was rented to other operators with the last of which playing Hispanic movies. During the 1970’s the theatre was used for country/western groups. The theatre was donated to the City of Garland in 1991. It is now operated by the city for live performaces.

See a 2004 picture of the PLAZA sign here www.vanisningmovietheaters.net

That large Plaza neon sign was installed in 1949 at a cost of $5000. I remember a newspaper article talking about the spinning ball at the top. I was only 9 years old then and my parents drove us downtown justs to see the large Plaza display.

The largest crowd I remember at that theater was when Old Yeller showed on a Saturday matinee. The place was packed and all the isles were jamed with kids They were actually sitting on the floor in both isles. I left after the movie was over and outside was two lines of people that were lined all the way down around the corner of the police station.

And a close up of the top of sign tower.

I think that this beautiful theater might be a Jack CORGAN design???

The Plaza Theater is showing movies again. The City of Garland showed ‘Some Like It Hot’ on June 30 and ‘Top Gun’ on July 28. and there was no admission fee. I hope they keep this going.