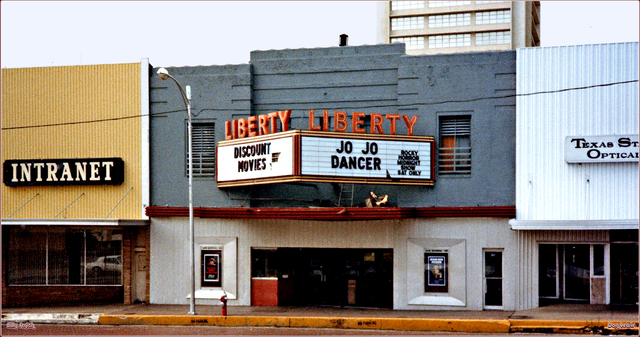 The 400-seat Liberty Theatre was opened on June 20, 1930 with Eddie Dowling in “Blaze o' Glory”. It was closed in 1973. It was reopened on March 28, 1975 with Rod Perry in “The Black Godfather”. The city of Tyler purchased the closed theatre in 2008, for $180,000. The city then partnered with the East Texas Symphony Orchestra to raise more than a million dollars of private donations to restore the theatre.

Renamed Liberty Hall, an invitation only concert given by the East Texas Symphony Orchestra was held on July 23, 2011. The ‘Grand Reopening’ will be September 10, 2011. The Liberty Hall will host concerts, classic movies and other entertainment. Architect Mike Butler worked to return the theatre to its Art Deco style, expanded the stage and refurbish the theatre, which now has 330 seats.

While the theatre was closed, Chuck Van Bibber wrote this description: The Liberty Theatre has been well maintained even though it is closed. The upper facade is in a mint green color with black trim. The lower facade is done in tile with a checkered pattern in cream red and black color. The box office is to the left side of the entrance doors. Smaller lobby but the entrance doors look like they were from a 1940’s remodel and are solid wood with a diamond shaped glass in the upper section of each door.

I received an email from Sam Kidd, Treasurer and Docent of the Smith County Historical Society in Tyler TX. According to Mr. Kidd the city of Tyler Tx recently purchased the Liberty Theatre and is going to refurbish it for use by the East Texas Symphony Orchestra and other events.

Don, “from personal experience”? Have you visited this theater?

If the town bought the theater to refurbish it, are you telling them to forget it? That would be disappointing for cinema treasures fans to do that, don’t you think?

Several interior Views of the Liberty Theater posted on My Space. The proscenium looks intact but the rest of the theater appears to be a mess as far as structure. Could not connect the pictures with a date. There are two pages worth. Click on each picture to enlarge.

The photos in the above comment section were taken inside the Liberty Theater in 2004.

I have about 100 pictures of the inside of the liberty as i went to TYLER to buy the theater.I did move to Tyler to open another bsns but did not buy this theater.All the pics are on film.

Motion Picture Times of June 24, 1930, said that the new Liberty Theatre at Tyler, Tex., had opened on on June 18. The owners and operators of the house were Mr. and Mrs. William Shieldes. They had earlier operated the Queen Theatre in Tyler, but had sold it to the Dent circuit, which in turn had been bought by Publix. The opening feature at the new Liberty was “Blaze of Glory.”

The May 6, 1944, issue of Boxoffice said that William Shieldes had begun his exhibition career in Tyler in 1919, that he had operated as an independent until 1934, and had joined the Interstate Circuit in 1935. In 1944 he was city manager at Tyler for Interstate.

From Tyler a photo of the Liberty Theatre prior to the ugly tile work.