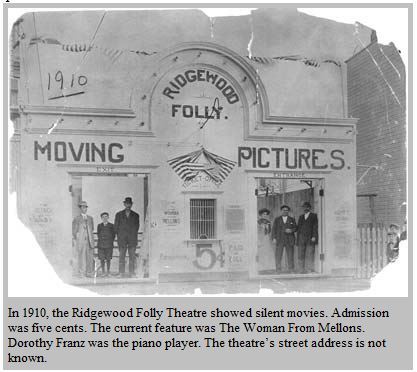 WOW after reading this thread I tried to stand up and got dizzy from the mass of info and missinformation. Has anyone really found out the real deal. i must say i had a good chuckle reading all this.

Sheeeesh. Do you ever sleep? It seems like no matter where I go in here you are everywhere. LOL The Ridgewood Bill’s “Follys” When is the picture database going to be functional again and why is it there are time when I come in here showing my self logged in and then I post a message informing me that I need to be logged in to post? it happend to me twice today.

I have had it happend quite a few times. It’s gotten to the point where before I hit submit I copy it so if I get that I log back in and paste it. Is there really a Queens Historical Society or is it Hysterical Society?

I have to say one thing about this site. When I try to go to sleep at night rather then counting sheep i try to go back in time and remember the times that i was in most of the theatres I had been to. i would love to go up to the Bronx to see the Paridise but from everything I have been reading there is trouble in Paradise. $25 million to restore it and now it is all going to waste. The interior is beautiful and reminds of the Loews 46th street which is now a furniture store. From what I gather the Kings had a simalar amospheric interior. As far as I am cooncerned NYU should be taken to court and be forced to tear down that building they call a dorm and rebuild the Academy of Music on it’s original foundation. It did have a Mighty Wurlitzer organ but it was sold and removed in 1976. I wish I had the moiney to just drive to all the theatres that are still standing.

The Paradise and the Kings have lots in common unfotunatley one of thos things is that they are both in neighborhoods that have been run down. I am more familiare with the area where the Kings is now. When it was in it’s hey dey it was in a mostly white working class neighborhood. Now it is run down. Most of the stores nearby are closed or run down as well. Mostly West Indian and Jamaicans live there with scattered bits of Korean and Vietnamese. Not to many white people left. The same can be said about the area where the Paradise is.

I was watching a news story on line where some guy promoted a show andused Joe Gentie’s Ticketmaster account for ticket sales. When he called Ticketmaster to get his money he was told that since it was no his accoun that he had to get the procedes from Joe Gentile’s company The ammount was about $240,000. Also on that same report were others who had problems collecting money or obtaining deposits back for events canceled by the owners. The Bronx Boro president seemed all gung ho about the the restoration and reopening. SOmeone posted a link to the Bronx Ball 2007. You would never know there was trouble in Paradise from that video.

The Ridgewood Folly Theater was a real theater that showed movies, but it’s location is still a mystery. Myrtle Ave should be removed, as that was misinformation, just as the “Queens Historical Society” comments were a goof.

Hey Bway from what I was reading it sounds like this whole thread was a goof from the get go.

Yes, Myrtle Ave should be taken off, as the location is still not 100% known. It should just say “Ridgewood, NY” for now, until we get the actual street address.

Address Numbers can change the old address you have tried may not even be good anymore. There are a lot of posts on this site and we still do not know were this movie house was.

What a Folly about the Folly!