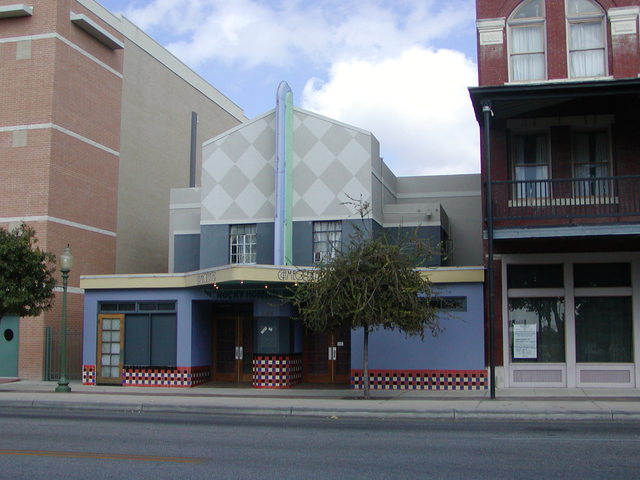 This very unique theatre, which was constructed in 1940, is located near St. Paul’s Square in downtown across from Sunset Station Depot. The Cameo Theatre was opened in 1941 as an African-American movie theatre, operated by the Bijou Amusement Company. The front of the theatre in its Art Deco style is what sets the theatre off. The upper portion was set in and came to a point at the top. On the upper portion there was a diamond pattern in two tone blue set against a darker blue background. The lower portion of the upper façade had two windows set in the center and in a dark royal blue.

There was a vertical sign with “Cameo” on it in the upper portion of the front façade. There was a strip of cream color that divided the upper and lower floors of the building and came to a slight V-shape over the entrance with the words “Cameo” on each side.

The main entrance was a dark blue color and there was a free standing box office. The portion along the lower front of the theatre was done in a checkered tile in red and white. The same with the lower section of the box office. The Cameo Theatre had a nice sized lobby and a single floor auditorium. The Art Deco style was maintained throughout the lobby and auditorium both in color scheme and lighting fixtures.

On April 17, 1970 it was renamed Cinne Arts Theatre, opening with “I Am Curious Yellow”.

The Cameo has been used recently for legitimate theatre by the Actor’s Theatre of San Antonio (ATSA). The theatre is in good condition, and is (as far as I know), available for rent.

I see the CameoCenter website gives an opening year of 1940. In Film Daily Yearbooks that I have from 1941 there is only one Cameo Theatre listed but the address given is 619 E. Commerce Street. This Cameo is listed on Cinema Treasures /theaters/5553/ Has there been a re-numbering of the street and these are the same theatres?

Cinema Treasures members have probably already noticed the site has two separate pages for the Cameo…this one, and one showing the address at 619 E. Commerce. First, it’s safe to say the two are one and the same. San Antonio certainly didn’t have two Cameos five blocks apart in the 1940s. The 600 block of east Commerce starts at Alamo St., and the cross streets back west to the river are the same as they were in 1940. Thus, I believe the 600 block now is the same 600 block that existed when the Cameo was built. This leads to the conclusion that the 619 address is simply wrong. Does anyone have anything different?

I ACTUALLY DID A GIG AT THE CAMEOCENTER AND KNOW THE OWNER JIM ZACCARIA. HE KNOWS THE WHOLE STORY OF THE CAMEO. I’LL ASK FOR HIS PERMISSION TO POST THE STORY.

From the Cameo Theatre Corporation: We have owned the building since the late seventies. It was built as the city’s first and only theatre for black audiences in 1940. The street was renumbered in the ‘60s when the interstate 37 went in, so both sets of building addresses are correct for their respective dates. The Cameo was built with both a vaudeville stage and theatre screen, as vaudeville had not yet died in the South. Louis Armstrong, Fats Domino, B.B. King performed there in the early years. They also had “bread night” and “china night” with giveaways for each ticketholder. After the theatre closed it was turned into a porno theatre, then a Temple of Islam. It opened as a live theatre in 1980, and has been in mostly continuous operation since. More recent performers have been Metallica, Guns 'n’ Roses, Stevie Ray Vaughn, Susan Vega, and Stan Getz. The interior has been refurbished with the main color being deep burgundy, into the Art Deco Egyptian style. There was actually very little left of the interior, so it has been decorated in that style as a supposition of what might have been. Long time patrons have said it is fancier now than when it was built. The theatre is now an event facility that can be rented for private receptions, screenings, conventions and the like. The adjacent building has also been restored to its 1908 glory and functions in tandem with the theatre for larger events. Our web site is www.CameoCenter.com

Neat!
I was the technician there 92-93. During that time the Cameo was really what I would term a “last bastion” art-music and experimental audio-visual facility, the second to last in line of a string of renovated haunts for the discerning artist and spectator, that eventually gave way to gentrification, which is an understandable evolution of any old building. Why cry? The performance art in mid-week was fresh, the occasional raves were a blur, and sometimes a huge industrial act would grace us. Not to mention great jams next door and on the ROOF. Did I say its haunted? Well it is. I hope to play on that stage again. Anfo Merc

A neighborhood Discovery Tours guidebook published in 2002 by the City of San Antonio’s Office of Cultural Affairs has the following to say about the Cameo:[quote]“One of the focal points of the old St. Paulâ€™s Square area was the Cameo theater, the first
white-owned theater to open its doors to African Americans in San Antonio. Since 1919, the walls of the Cameo have heard every sound from the notes of Count Basie, Ma Rainey and Bessie Smith, to the dialogue of Native Son, the sermonâ€™s of Rev. Claude Black, to wailing 1980s heavy metal and to the now current silence before a hoped-for revival”[/quote]The Bexar County Appraisal District gives the same 1940 construction date for this building that the Cameo website gives. Was there an earlier Cameo Theatre at the same location? Or was the 1940 construction actually one of those renovations so extensive that it reset the construction date? Or was the Office of Cultural Affairs guidebook just wrong?

A .pdf of the guidebook is available online here (there are no illustrations, alas.) The section about the Cameo is on page 12.

the cultural affairs booklet is wrong. the Cameo was built in 1940

I am working on a story on Metallica’s 1985 tour to the Cameo. They return to San Antonio and play the Alamodome on June 14 and looking for more stories, tickets and photo’s. I was with my friend Liliana Martinez a great photographer of that time who took several pictures- which I have. If anybody would like to add to my story, please contact me for more info. email me.. Thanks for sharing your stories here.

Opened as the Cinne Arts on April 17th, 1970 with “I am Curious (Yellow)” and listings disappeared later in the year.