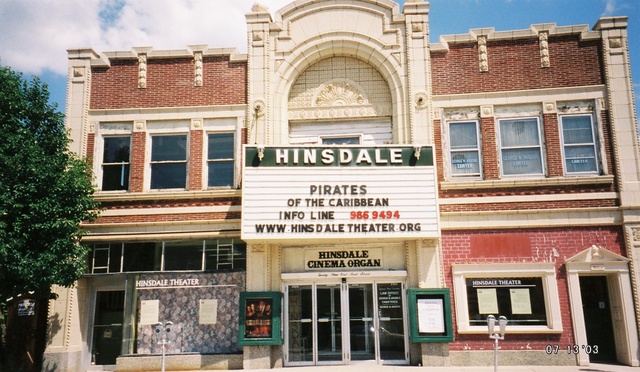 The Hinsdale Theater was built in 1925 by local architect William G. Barfield. Complete with ornate plasterwork and a dome in the auditorium, the Hinsdale Theater was remodeled in the 1930’s and again around 1961 when it went over to live theatre use for a couple of years, known as the Hinsdale Summer Theatre. A rather garish marquee (since taken down) was added at this time. A Kimball 3 manual, 28 ranks theatre organ was installed. The console came from the Senate Theatre on Chicago’s west side, and the pipes came from the Trianon Ballroom Chicago and the Tivoli Theatre, Cottage Grove.

The Hinsdale Theater closed in the late-1970’s, reopened in 1983 under the management of Classic Cinemas until 1990. It re-opened and then closed again in 1996, and was used sporadically until 1999.

In 2002, the Hinsdale Theater was leased by the Village Theatres chain, screening first-run films, but as of August 31, 2003, the theater was closed yet again.

If it was converted to retail, then I assume the auditorium was gutted.

As I said, much of the plasterwork is intact. They put walls and floors in but kept as much as possible. http://www.flickr.com/photos/tags/ctid808/

Looks like they split the auditorium into two floors for two tenants, and included the lobby space in the lower one. Was that how it happened Brian?

Sort of. The lobby end seems to have been destroyed for the store that’s now there, and the stage end is separated and operates as a bar & restaurant.

it was parted out

I understand the console went to australia, a number of the pipes went to a project in england, and others remain in storage

Circa 1961 photo as Hinsdale Summer Theatre added credit Tim Crowe. The marquee was modified with that name for stage productions. This from the below 2009 Tribune article by Vikki Ortiz Healy confirms it was used for such in the early `60s, and should be added to the Overview.

“The theater, used for both cinema and stage productions, at the time was one of the only independently owned and operated theaters in the Chicago area, Glass said. This appealed to Hollywood stars looking to make extra cash by acting in summer stock productions.

“Hinsdale was a good community to do (the summer stock productions) in because there were a lot of artistic people and it was a relatively well-to-do community,” Glass said.

In 1962, Blackmur stopped producing the summer plays and the Avgerises turned it over to a local theater group, which lasted just two years."