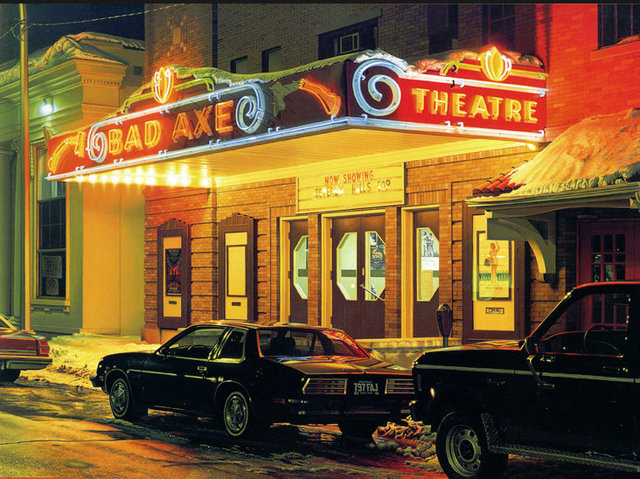 This classic small town movie theatre in Bad Axe, Michigan opened on February 21, 1916 with 500 seats. It was built for the Knights of Columbus and served as their meeting hall, a venue for social events and a silent movie theatre.

In recent years, the balcony was enclosed to create a second auditorium with seating as Cinema 1: 300 seats, Cinema 2: 70 seats.

Well “wheelieman”, “wheelieman” is a pretty queer name itself, so shut it and Bad Axe is the ownage.

The Bad Axe was part of the Schulte Circuit in the early sixties. William Schulte was owner. The chain was headquartered in Chicago. Other Schulte theaters in Illinois at the time were the Bliss in Blissfield, the Drive-In and Main in Coldwater, the Oakdale in Hazel Park, the Howell in Howell, the Mariner in Marine City, the Romeo in Romeo, the Strand in Tecumseh and the Ryan in Warren.

Did I say Illinois? All of those theaters are in Michigan. Sorry about that.

I see Clint Eastwood is playing there in “FIREFOX”

Both 1982 pictures are from the same day different position on the street.

My grandfather Albert S. “Al” Johnson’s theater job slides include one shot taken in September 1948. It shows four red art moderne style entrance doors with half-octagonal glass. Al was said to have held a patent on these “Johnson doors” and they were a feature of several of his Michigan theater jobs. These doors, or identical replacements, are seen in a 2020 view of the theater.

All but one of Michigan Schulte Circuit theaters listed in Ken C McIntyre’s 2007 post were built or remodeled by my grandfather’s company: the Main in Coldwater, the Oakdale in Hazel Park, the Howell in Howell, the Mariner in Marine City, the Romeo in Romeo, the Strand in Tecumseh and the Ryan in Warren. he built or remodeled a total of sixty-four Michigan theaters and drive-ins between the 1930s and 1950s.

Odd name for the theatre and town!!

The city was supposedly named by an Army surveyor who found an old rusted axe at an abandoned campsite at the junction of 2 trails.