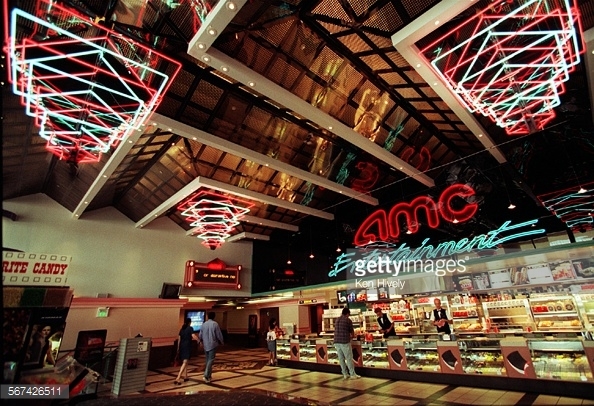 The AMC Century 14 opened in October 9, 1987 at the north end of the Century City Shopping Center. The theatre featured two concession stands and an expresso bar. In the late-1990’s, it was remodeled and the secondary concession stand closed, leaving only the main stand and the expresso bar.

The five big auditorims seat about 450 each, while the smaller nine all seat about 200. This theatre was AMC’s busiest for years, and was where to catch limited engagements on films. But due to the Cineplex Odeon (later Loews) Century Plaza 4 down the street, never received all the product until 2003 when the Loews closed. But even with the Loews closing, the new Grove theatre in nearby Fairfax District took its toll on business on the old, non stadium seating theatre.

Sadly (for some), this theatre closed on December 13, 2005. The following day a new AMC 15 plex took its place on the south side of the Mall, next to a Macy’s department store.

I remember going there in 1988 to see Moonstruck. There was a constant humming noise throughout the movie. The manager said certain auditoriums had screens that were kept in place by a machine that pushed out air and that was what the sound was. Never heard of this ever before or since.

As to the screen described by Douglas above. Back in the late 80’s and early 90’s, AMC utilized Taurus curved screens in some locations and these screens did utilize a vacuum system (there was obviously a problem in your auditorium, as the screen shouldn’t have been making an audible sound during your movie).

Such memories!! I saw Barton Fink, Reservoir Dogs, Magnolia!! So wild to take the trip to this theatre back in the day.

Btw this was the EASIEST theatre to sneak into in it’s day. The exit was at the bottom of a long flight of stairs and you just walked back up those stairs when people were exiting and made a bee line to the bathroom.

I attended the opening weekend back in October of 1987. Concessions were priced under a dollar. 20th Century Fox classics were screened over the three days at discount prices. The 70mm Star Wars trilogy played in the big cinema. Alien and Aliens double featured one over. Romancing the Stone also played in one of the smaller auditoriums. Over the next 18 years I saw so many films there: Bram Stoker’s Dracula, Jurassic Park, Loaded Weapon 1, Alive, Last Action Hero, Batman and Robin (walked out), South Park, Lord of the Rings: The Two Towers, just to name a few. Last film I saw was Revenge of the Sith during what would be the finally week of operation. Great theater for its day. Lots of celebrity sightings. Many fond memories. The structure now houses a Container Store. Luckily, the AMC Century 15 on the other side of the shopping center continues my moviegoing tradition when on that side of town. 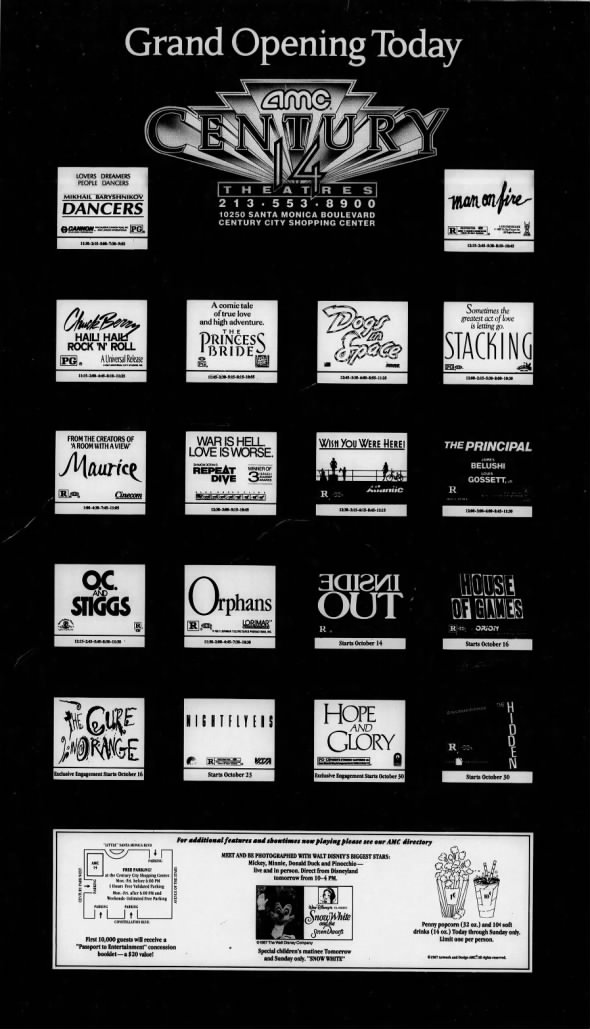