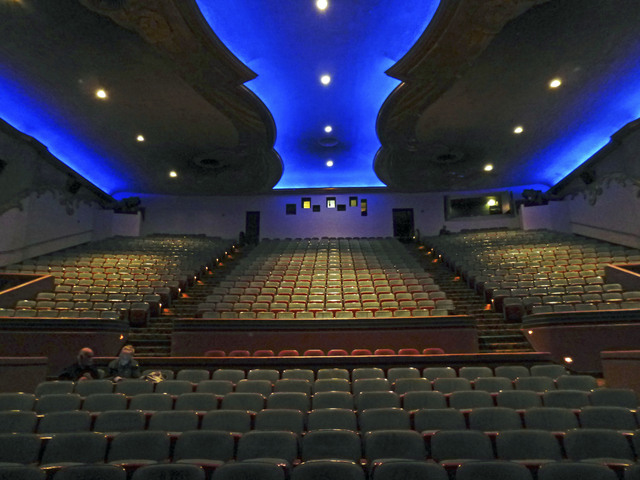 Originally on this site was the Empress Theatre, designed by architect Lee DeCamp as a vaudeville theatre which opened in December 1911. It was rebuilt as the Hippodrome Theatre, opening on April 29, 1918, again used first for vaudeville, with movies as part of the program, the opening bill featured Rin Tin Tin in “Tracked by the Police”. Movies were still part of the Vaudeville bill in the late-1920’s. By the early-1940’s the Hippodrome Theatre was operated by Fox West Coast Theatres.

The Crest Theatre opened on October 6, 1949 with Mario Lanza in “That Midnight Kiss”. In attendance from Hollywood, were the stars of the movie Kathryn Grayson and Mario Lanza. Government officials included Governor Earl Warren (later Chief Justice of the Supreme Court), and Honorable Belle Coolidge, the first woman mayor of Sacramento. Searchlights filled the air as the theatre was properly christened. Seating was provided in the auditorium for 1,217 on a stadium plan, with a stepped section at the rear.

The Crest Theatre showed films exclusively until late-1979 when it was closed due to poor ticket sales, the decline of the K Street mall, television and the rise of the multiplex.

In 1986, the theatre was re-opened by a group of local residents and continued showing films. The grand reopening took place on November 18 1986, with the MGM musical “Singin' In the Rain” starring Donald O'Connor, who attended in person. Mr O'Connor was given a pair of scissors and, with a smile, snipped the celluloid ribbon across the front doors and the Crest Theatre was in business again. In 1995, the Crest Theatre completed a one million dollar restoration which returned the 975-seat theater back to its original Streamline Moderne look, featuring a fabulous gold-leaf interior. Two small auditoriums were created in the basement of the building.

Over the following years, the Crest Theatre has been host to many different types of shows and events. It continues to host a program of classic and recent films. Concerts with artistes such as Cab Calloway, B.B. King, Dave Brubeck and a variety of comedy shows such as Bernie Mac, Carrot Top, Sam Kinison and The Mommies. Community events include the popular Sacramento Symphony ‘Jeans and Beer’ and ‘Mocha and Mozart’ series. In addition, the Crest Theatre is frequently used for private events such as political fundraisers, receptions, movie screenings, conferences, employee orientations and weddings. The two small basement auditoriums were closed in March 2013, and films were no longer scheduled in the main auditorium. However, by 2015 classic films were being screened.

Interesting hisory of the fallen marquee.

The Crest is currently for sale.

Ah, Don – I think you have your links mixed up somehow; the link you posted in the comment of of August 4, 2010 points to a postcard of the Grand theater in Grand Island, NB in the 1930s, and the link in your comment of August 5, 2010, is not a link to the Crest website, but to a postcard showing the Crest in the 1940s. The Crest’s website is listed correctly in the headnote, above.

I am sorry to have misunderstood your August 5 comment.

The Crest is considering closing the additional screens that were created in a basement space in 1997. View article

As mentioned in the post above, the closing of the two basement theatres attached to the Crest has apparently taken place in early March 2013. Even worse news for the independent/foreign/alternative film scene in Sacramento it has been announced by the Crest that the main auditorium will not be showing films 7 days a week any more. There are no films at all on the schedule for the last half of March and very little lined up for April. Looks like it will be mostly performing arts and dark days for the Crest for the foreseeable future! Not good news at all for downtown or us regional alternative to mainstream film fans. Now all we have left for that fare is the rather shabby Tower!

Disaster!!!! The management of the past 28 years is leaving the Crest because of a number of things. The owner wants management to pay a higher rent and fund much needed upgrades: 100 year old pipes and new restrooms, new AC, digital projectors and more. After Oct 31, 2014 the Crest will no longer be as it was. Right now it is up in the air as to what will happen. See the Sacramento Bee article here: http://www.sacbee.com/2014/08/26/6654089/anderson-longtime-crest-operators.html