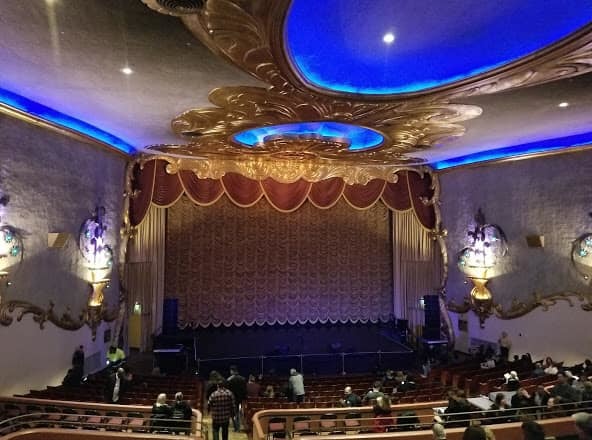 Thanks David for this hot photo of the former Fox West Coast Theatres Fox Crest Sacramento. The built out stage took out 8 rows of seats. Now used for stage events and a few movies. Looks like they have pulled the red & blue lights out of the side wall lights and stuck in old white bulbs. The curtain waterfall color lights are not on. At least they still kept the blue effect lights on the ceiling. Hope the lobby coves still has some of the pink neon working. The best part of this downtown Sacramento cinema is the neon on the outside marquee. Some of the best still on the West Coast. Thanks again for posting this image. If anyone is up visiting Sac at night check out the neon If something is playing at the Crest. If you look up on the wall you will see the original Ampex surround wooden box speakers when they ran 4 trk magnetic 35mm film prints in the 1950’s and 60’s. They have Dolby® now for stereo DCP movies but can still show 35mm film I believe. Outside back you can still see the 3 cement cases for the 3 speaker L R C speaker set up.