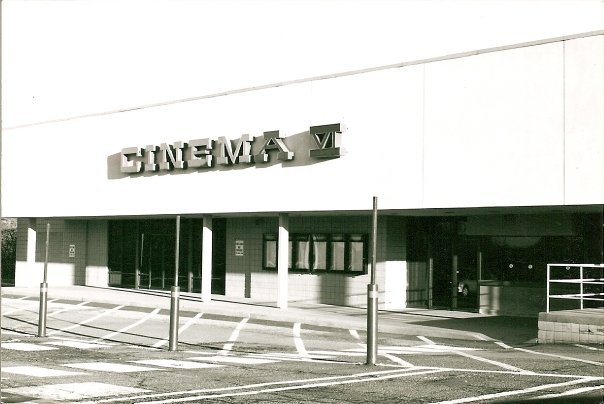 Opened as a twin theatre in December 1973. Then in the early-1980’s added four more screens. I remember it to be the first multiplex in the Somerset/New Brunswick area. It closed in the late-1990’s due to poor turnout when the Loews opened on the site of the old Rt. 1 flea market. The building was razed in early-2005.

Rutgers Plaza was a very nice theater that started life as a General Cinema single theater. It was split in the 70’s into a twin. In the late 70’s/early 80’s a 4 theater addition was added on the right side of the building expanding the total theaters to 6.

The Rutger Plaza did tend to attract the college crowd during the 80’s due to it being really the only theater is close proximity to the University at the time. The theater went into decline really due to poor management and the deterioration of the interior. The final nail really came with the opening of the Loews 18 on Rt. 1 not too far away.

I was pretty much a regular the the Rutgers Plaza and it was sad to see it decline and finally close. The hulk of the old theater sat abandoned for many years and K-Mart in the Rutgers Plaza shopping center at one point used the marquee to do advertising.

The building has since been razed and a new Stop & Shop mega-supermarket was built over the site.

Growing up I lived within walking distance of Rutgers Plaza. I would spend every Friday there watching what ever movie I had my mind set on (usually something in the Horror genre). In 1992 I joined the GCC staff. First I worked the Floor cleaning theaters and rippping tickets. Later I moved on to Concession, Box Office, corn popping, and yes…that was me on the Marquee every Thursday putting up new titles (for anyone who ever honked or yelled up to me…I thank you).
I worked with a great group of people…Ant,Liza,Laura,Bryan,Toto,Dave,Dean,Jennifer,Denise,The Michelles,Doris,Rich,Cory,Kate….and most of all the man that let us holligans get away with having so much fun, Lee M.
Worked there until 1997….but returned on Oct.12th 2000 (the final night of operations) and walked the auditoriums and back hallways one last time. Had a blast being a part of the “GCC Posse”

Not listed in the 1970 Film Daily Yearbook. Listed in the 1976 International Motion Picture Almanac under New Brunswick as Rutgers Plaza Cinema I & II.

-My favorite memory of Rutgers Plaza was being in the audience on October 31st, 1978 for a screening of Hallowwen on its first run. It was the 8 pm show. At one point in the film is a title reading “Oct. 31, 1978. 9:15 pm.” I looked at my watch and that was the exact time. I felt like I was watching the film in real time. Very spooky.
-Of course, I would later help re-open the theater when it was twinned in 1982-83. Mr. Camelli borrowed me from Menlo Park for a while. He was another awesome manager, along with Mr. Rizzo and Mr. Misareck(spelled wrong).

My goof. I was there when the 4 theaters had just been added on. What a mess that was! Nice big candy room, though. Not the smelly closet that was at Menlo Park.

This cinema followed the design of several General Cinemas of the era, one big auditorium with a smaller one next to it. These were okay, but the four “boxes” that they added in the 1980s were much too small. You always hoped whatever movie you were going to see was in one of the original auditoriums and not the boxes. The place holds a lot of good memories from my days at Rutgers and living in the area afterwards. (I remember a FREE screening of HOOSIERS, with Gene Hackman).

I’m glad that Gschmidt thinks Lee M was such a great guy. He may well have been in the 90’s, but I can tell you first hand that in 2004, he was nothing more than a lying you-know-what. He took over a theatre for Clearview, and proceded to get rid of the projectionist union, of which I am a part of. I lost a $50,000 a year job because of that “great guy”

The original theatre was built as a twin in the early 70’s. The additional 4 were added in the mid 80’s.

I saw “Batman” at this theater on its opening night in 1989. The projectionist tried to string two prints to four auditoriums and the show was delayed for over an hour…