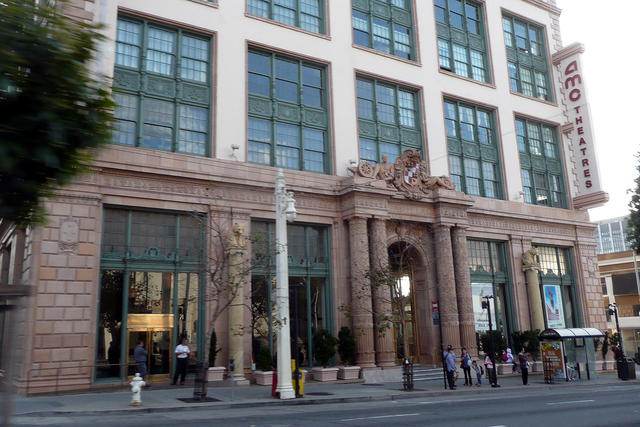 This stadium-styled multiplex is perhaps best-distinguished by the use of a particularly ornate showroom of a former auto dealership as its grand lobby (though the cinemas themselves are new construction annexed to the older building). The AMC 1000 Van Ness multiplex opened on July 10, 1998, with seating listed at 3,146. It was closed on February 7, 2019. In was taken over by The Korean based CJ CGV chain in April 2019 and is being restored/renovated to the plans of architectural firm TK Architects. It reopened on September 2, 2021 as CGV Cinemas San Francisco.

If the Cineworld Group (Regal) takes on the remodel of the AMC 14 Van Ness in SF maybe we will have under one roof a Dolby Cinema®, Screen X and a 4DX. It will be a big comeback to Regal Theatres under their new owners Cineworld. Regal at one time was a huge operator in the San Francisco area. With the new Regal Theatre going into the old Macy’s spot in the Stonestown area of SF they will have two new movie spots in SF If they take on the AMC Van Ness 14 location.

What about Bow Tie Cinemas or perhaps National Amusements or even Cinemark?

Cinemark Theatres under their Century Theatre brand has way too many cinemas in the SF Bay Area same with AMC. It’s time for a new cinema company to move into S.F. Bow Tie & National are mainly on the East Coast. Many new theatre operators are ready to take over old cineama’s or build new ones in California like Cineapolis opening this June in the Hillsdale area of San Mateo CA along with Maya, Showcase Icon and the new Cineworld Regal Theatre brand. Bring on the huge X curved screens along with 4DX, Screen X & Dolby Atmos® We are ready in San Francisco for the new guys to bring us some new movie going treats that are missing at Century.
The old AMC 14 at least had Dolby Atmos® in one of their small spaces. Whoever takes on the remodel upgrade job at the AMC SF 14 may add more new type sound systems as there are other new sound companies available besides Dolby® these days like Barco . One bad thing the seating will be way reduced when they put in recliners. I am not a fan of these way too big sleeper seats. I’d put in some new nice hi back deluxe seats and just put in the recliners in the largest auditoriums.

Recliners should be in the home, not a theater.

A brand new cinema theatre company from Koren chain CJ CGV will take over the former AMC spot on Van Ness in 2020. They will feature SF’s first 4D and EX cinemas plus a giant curved screen any many other special extras that AMC & Century don’t offer in SF. They have two spots in Southern CA at this time. So glad the place will become a movie theatre again.

I have been told this new South Korean cinema company does very well in the LA area because they offer cinema treats that the local chains don’t bother to offer. It will be fun to see a movie in 4D & EX in the San Francisco CA area in 2020!

CJ CGV doesn’t usually install recliners in all of their cinema auditoriums but we’ll see what happens. CGV Buena Park only has them in their Premium Cinema auditoriums and that’s how I expect Van Ness will be.

As terrywade mentioned, they are also known for their flavored popcorn and other concession items.

The FB page has confirmed 4DX and ScreenX premium formats for the theater.

CJ CGV has their own large format auditorium called Starium, which is installed in some of their locations in South Korea and East Asia. The largest Starium auditorium in Seoul uses Christie laser projectors and Dolby Atmos sound: https://www.christiedigital.com/emea/about-christie/news-room/press-releases/6p-laser-lights-cgv-biggest-screen-english

We’ll see if they bring that over to one of the large auditoriums at Van Ness. It seems like they’ll be focusing more on the general theatre renovation and other premium formats, which already cost quite a bit.

Did AMC (or anyone else, for that matter) ever offer a more detailed explanation as to why they just shut down out of the blue like that? The only movie I ever got to see there was “13 Days,” and it seemed a decent enough screen.

The former AMC Van Ness Theatre has been fixed up with all the new gadgets like 4DX but It still sits closed after all these years. CJ CGV Cinemas I think dropped out of this SF location. Some one needs to take over this movie spot in SF. No other cinemas in this prime area of San Francisco.

This theater reopened Sept 3. The new name is CGV Cinemas San Francisco. There are 2 other CGV Cinemas in California. One is in Buena Park, the other in Los Angeles.

Currently tickets for 6 films are being sold on Fandango in 8 of it’s screening rooms.