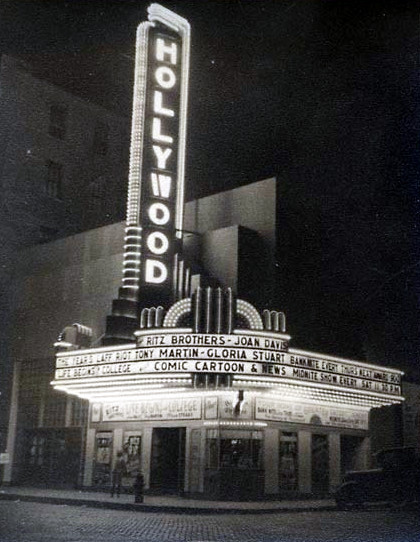 This Art Deco-style former movie house on 5th Avenue S. in La Crosse was designed by the Minneapolis firm of Liebenberg & Kaplan and opened on December 3, 1936 with Stuart Erwin in “Pigskin Parade” In the 1940’s it was operated by Paramount Pictures Inc. through their subsidiary John Friedl. After closing for movies in 1989 it functioned as a venue for rock concerts from December 28, 1993. This use finished in August 2003 and it was converted into a childrens museum.

The childrens museum closed in 2006 and the theatre’s fixtures and fittings were sold off.

My girlfriend and I live right across the street on 5th Ave above the dollar store, and have talked on numerous occasions about how LaCrosse needs to bring back the Hollywood Theater. It’s been vacant for way too long, and we would love to run a sort of alternative venue for downtown area (i.e. good local music, classical or independent movies, theater, etc). However, after reading some of the previous posts it seems that this would be a HUGE investment with some of the work that needs to be done. If anyone has any information on the current owners we would like to speak to them and present our plans. Seems like the Children’s Museum used to own it but has now changed owners? Any info would be greatly appreciated, thanks.

A shot of the dedraggled facility shows up in a new car magazine in an article about the Buick LaCrosse.

Phil Addis and his wife Julie of Main Street Renaissance had the high bid of $15,157 – sight unseen – for the 1936 HOLLYWOOD Theatre at a sheriff’s sale Wednesday (Leap Day) February 29th 2012. He once saw “Star Wars” and “E.T.” there and said to the La Crosse Tribune that the HOLLYWOOD someday can again be a venue for live performances and movies. Its last event was a Bobby Vee concert in December 2004. Harris Bank held the deed and the owner had been the Schluter Construction Inc. of Plain, Wis. There are back taxes of $14,700 for the past five years. The sale still has to be approved by a Sauk County judge so it could be two months before Addis can even get inside the HOLLYWOOD, which is part of a National Register of Historic Places district. The seats, equipment and light fixtures have been removed.

The 1000-seat HOLLYWOOD was sold to Fortney, Fortney and Fortney LLP in 1993 to preserve it; then the family donated the building to the Children’s Museum of La Crosse in 2003. By 2005 it went up for sale again. It was assessed this year at $114,700. Main Street Renaissance already owns nine buildings downtown.

The deed arrived on April 4th, 2012. The new owners are considering a “before renovation tour” (donations to benefit theater improvement). If it is a go I’ll be there!! :–)

Here is a link to a TV station’s story on the theater’s new owner’s restoration plans http://www.wxow.com/story/17401470/hollywood-theatre-walk-through

The Hollywood was never owned or operated by Marcus Theatres. The most recent chains were, beginning from the 1970’s, Plitt, Cineplex Ogden and finally Carmike. There will be a considerable cost to refurbish the theatre besides the structure itself. Digital Sound and projection systems will be well over $100K alone. There isn’t a need to replace every seat on the main floor to its original 800 seats.

We own the Hollywood Theater in La Crosse, Wi. and are hoping to restore the same. Every seat in the theater was sold and the prior owner sold everything he could get his hands on. Please give us your suggestions and comments on our facebook page.

I worked at the Hollywood Theatre from 1971 to 1976. When I worked there it was owned by ABC Theatres, Henry Pitt bought the Theatre in about 1972, I think. Anyone who was in the theatre during that time willl remember the baby poop green color on the walls. They called that color Harry Green “Green” for the man who originally ran the theatre for Finkelstein and Ruben. Also when I was there the Manager was Joe Bronk who was forced to retire when the “Exorcist” came out. He was replaced by Joe Kretch, then Ross Halverson. I left for college shortly after. 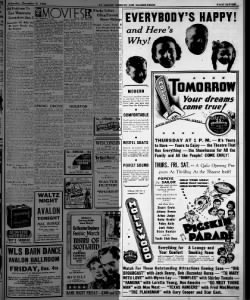