Weinberg Center for the Arts

Weinberg Center for the Arts (Official) 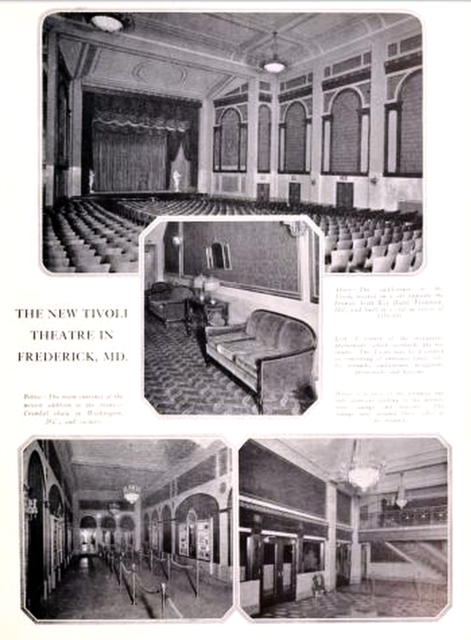 Opened on December 23, 1926, the 1,500-seat Tivoli Theatre was the largest of the three downtown Frederick movie houses. Constructed at a cost of over $300,000, the Tivoli featured lavish decoration, including marble, mosaics, velvet chairs, and crystal chandeliers. The theater also has a Mighty Wurlitzer organ, the only one in Maryland still completely intact and original. The architect for the Tivoli Theatre was John J. Zink, a native of Baltimore. By 1941 the Tivoli Theatre was operated by Warner Bros. Circuit Management Corp.

Though the Tivoli Theatre survived the competition from televison in the 1950’s, unlike the other downtown movie theaters, it began to steadily decline, both in attendance and its appearance. After a disastrous flood in 1976 from a nearby river, which caused substantial damage to the Tivoli Theatre, it was decided to restore the grand old theater to its original glory.

Over a year and a half later, in 1978, the former Tivoli Theatre reopened as the Weinberg Center for the Arts, named for the family that donated the building to the city of Frederick, and since then, has functioned as the area’s leading venue for performing arts, including Broadway shows, concerts, children’s theatre, and classic film screenings.

The Weinberg Theater is one of the most beautiful theaters I have ever been in. The marble trimmed walls and crystal chandelier’s set off the 1920’s movie palace atmosphere. Definitely a theater to visit if in the Frederick Area. jodyb

Although it was virtually complete when the construction crews walked out of the building in December, 1926, some improvements were made in the Tivoli by the Stanley Company, most significantly the addition of air conditioning. While the theater had been billed as having “one of the finest ventilation systems available,” it was cooled only by several large fans and blowers which circulated fresh air in the auditorium and in other areas of the theater. In the words of one local resident who frequented the theater in the 1930’s, “It could get as hot as blazes in there in the summer. Imagine it when it was full of perspiring people ”

The cost of air-conditioning a building as large as the theater, particulariy a small-town theater like the Tivoli, was nearly prohibitive, however, and it appeared the owners had no intention of spending the money. But through a purely coincidental set of circumstances, the Tivoli in the late 1930’s did truly become “as cool as a mountaintop.”

Challedon, as many local residents will recall, was a famous race horse raised on the W L Brann farm near Mt. Pleasant in the 1930s. In 1939 the horse won the Preakness and ran second in the Kentucky Derby. But before going onto these successes, Challedon was entered in the Santa Anita Handicap race in California, and Brann and two of his closest friends â€" Dr “Eddie” Thomas, the Frederick surgeon, and Rep. Joe Himes of Ohio, who lived at Prospect Hall â€" traveled to California to watch the race.

At a party the night before the big race, Thomas overheard Jack Warner, one of the Warner Brothers who then owned the Tivoli in Frederick, say he planned to “bet a bundle” on another horse, the favorite. “Pardon me, Mr. Warner,” Thomas might have said, “but I’m afraid you’re betting on the wrong horse The favorite won’t win. The winner will be Challedon.”

The next day Warner took Thomas' advice and bet on Challedon, who won
him $50,000. In gratitude, Warner offered Thomas a portion of his winnings, and persisted that Thomas at least allow him to throw a party in Thomas' honor. Thomas declined, but Warner refused to take “no” for an answer, and offered him practically anything he wanted.

“You can own a theater in Frederick, and I am a dyed-in-the-wool movie fan,” Thomas was said to have responded. “That theater is hot as it can be. You could do a real service for me and for Frederick by air conditioning it ”. With that, Warner called one of his
subordinates in New York and ordered that the work be done, at a cost estimated at over $100,000. In addition to being the most ornate, the Tivoli thus became the first building in Frederick to be air conditioned.

Here is a story about the long-time manager of the Tivoli from the Frederick News dated 4/30/52:

Louis C. “Jack' Forney, for the past 14 years manager of the Tivoli Theater here, will leave Warner Brothers employ Thursday to take a position at Harrisonburg, Va. His successor here has not yet been named. Well-known in civic, fraternal and the entertainment business, Mr. Forney will be associated with the Roth chain of theaters having its home offices in Washington and operating moving-picture enterprises in the District of Columbia and Virginia. Mr. Forney will be employed in a supervisory capacity for a group of more than a half-dozen theaters including two drive-ins. His headquarters will be in Harrisonburg.

A native of Winchester. Va., where his father, mother and sister still reside, the 43-year old Forney has been associated with the motion-picture business since he was a student at Handley High School in Winchester. He started as an assistant projectionist for L. Marshall Baker in the Empire Theater, Winchester, went to Staunton as a projectionist and assistant manager of the Strand and New theaters until 1931 when le was appointed manager of the Strand Theater at Staunton.

Mr. Forney came to the Tivoli as manager, May 19, 1938 after having been with Warner Bros, in Virginia for eight and a-half years. He succeeded C. O. Clark as manager here and is the fifth manager of the local show house. Since 1938, except for 23 months service in the Navy during World War II, he has been continuously occupied handling the Tivoli until October 1, 1950 when the renovated Frederick Theater was also added to his management. He tendered his resignation to Warner Bros., March 15, to take effect May 1 this year.

Does Ray Brubacher still play the Wurlitzer at the Weinberg/Tivoli?

Really nicely produced 8 minute video about the organ, but with several good images of the auditorium’s interior. http://www.youtube.com/watch?v=nbOEkXnNnB8